On Jan. 16 and on Jan. 17,, two of the greatest leaders of parks in Northern Virginia passed away. First, it was Art Little who served on the Board of NOVA Parks (Northern Virginia Regional Park Authority) for 33 years from 1987 to 2020. The following day, Darrell Winslow, who had served as Director of Parks and then Executive Director of the regional park system from 1966 to 1995, passed away. 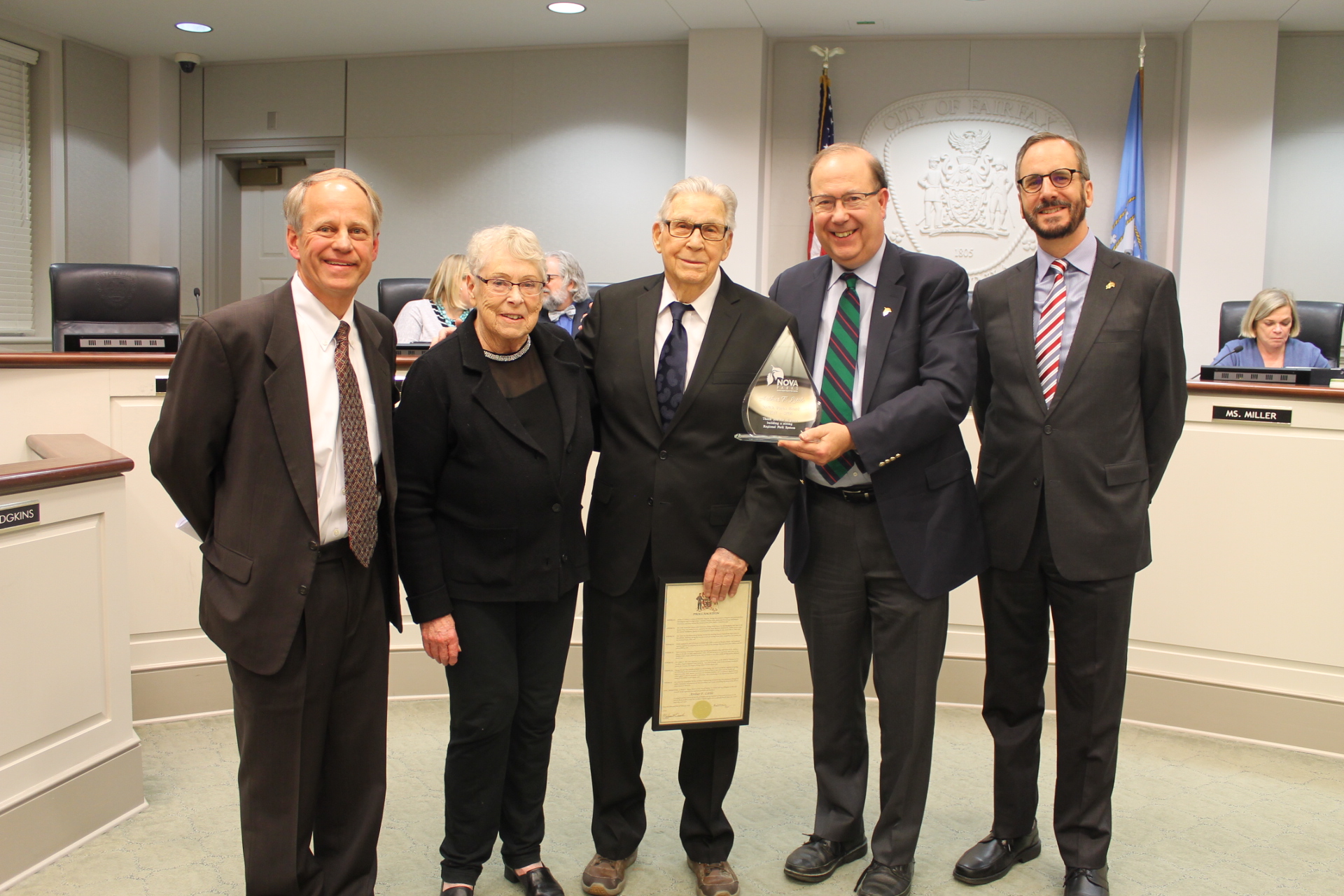 Little, 93 in this photo, died Jan. 16, 2022. Read more about Art Little and the presentation. http://www.connectionnewspapers.com/news/2020/mar/02/legend-selfless-service-northern-virginia/

Tom Brokaw coined the phrase “the Greatest Generation” to capture those that participated in WWII. Art Little fit that generation fighting in both WWII and Korea. Darrell Winslow was younger, serving the Army in Europe during the 1950s. Both exemplified the best qualities that Brokaw highlighted: responsibility, humility, work ethic, and community. This generation built many of the institutions that have been central to our civic lives for decades, including parks. As public lands, parks are central to creating community. We have all become more aware of this during the pandemic when the public has turned to parks like never before. Thankfully because of the work of Mr. Little and Mr. Winslow, those parks were there for us.

Darrell Winslow was a graduate of NC State University, an Army Veteran, and an experienced Park and Recreation professional when he was hired by the Regional Park Authority in 1966. At the time, the agency was seven years old and had acquired a little over 2,000 acres, mostly along the Bull Run and Occoquan Rivers. Winslow’s first task was to create some operations. The very first regional Park operations were opened at Bull Run Marina off of Yates Ford Road. He was given a budget and a Sears Catalog as he told the story. He ordered a shed to be used as the concessions building and bought as many Jon boats as he could get. They sold worms and sandwiches, and his only rule for the attendant is that they must keep the sandwiches on the shelf above the worms. With that, the first health and safety standards were set. Within two hours of opening, all the boats were rented, and all the sandwiches were sold. Today over 87% of the operating expense for NOVA Parks are generated through operations. Darrell Winslow started this model, and by the time he retired in 1995, the system had grown to 10,000 acres, including many of the parks people associate with the regional system.

Art Little was appointed to the NOVA Parks Board by Fairfax City Council in 1987. In addition to the military, he served in the top ranks of the CIA. He earned a Bachelor’s Degree from George Washington University and a Master’s Degree from Auburn University. He wanted to give back to the community he was from, and Parks was his interest. He served on both the City’s Park & Recreation Advisory Board and the NOVA Parks Board. Art served as a commander of an Air Force base, and he often drew comparisons between running a regional park system and running a busy military base. During Art Little’s time on the NOVA Parks Board, the agency went from about 9,000 acres to over 12,000.

In the late-1980s to the mid-1990s, both Mr. Winslow and Mr. Little worked on the completion of the W&OD Trail that stretches 45 miles from Shirlington to Purcellville. They oversaw significant improvements to Meadowlark Gardens in Vienna, including the Atrium, and created a new golf course in Brambleton and many other new lands and facilities. They gave of their time and talents and created a lasting legacy that has benefited millions of park users every year.

Through service and civic contributions, Darrell Winslow and Art Little made our world a better place. We are forever indebted to them and the many others of their time that built parks and other civic institutions that are central to our society.