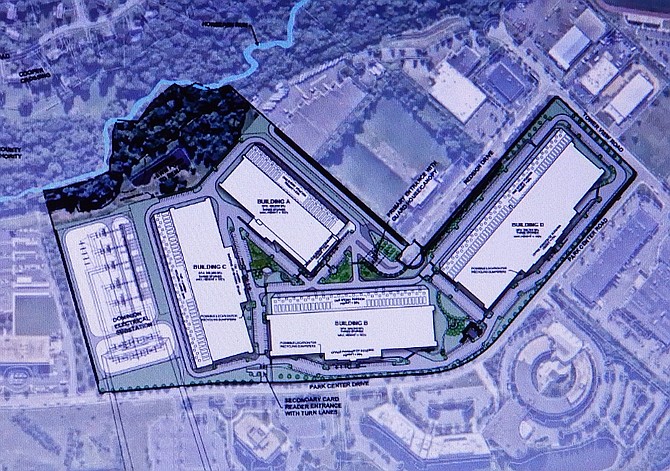 The property consists of four parcels, almost 60 acres total, on land zoned I-5 Industrial in the Route 28 Tax Corridor. It’s east of Park Center Drive and close to Route 28, and the existing buildings are owned by Preston Gray.

“Currently, seven one-story warehouses are there, and the site is proposed for four new buildings, plus an electrical substation to serve them, in a secure, gated area,” said attorney Lynne Strobel, representing Gray. “This is a special-exception application for additional building height.”

“The buildings there now are 75 feet high, and the applicant wants to go to 102 feet high to accommodate the rooftop equipment – which will be screened,” continued Strobel. “Primary access to the site is from Redskin Drive, with a secondary entrance from Park Center Drive.”

She said 33 percent of the property would be landscaped, open space. And, she added, “We’ll reduce the impervious area and will add a bio-retention pond. The buildings will have contemporary architecture and will be constructed of concrete, metal and glass.”

Strobel noted that county staff “wanted to make sure we’re protecting the environment, and we are. We’re not touching the Resource Protection Area on site.”

The WFCCA’s John Litzenberger asked about the number of extra vehicle trips per day that would result from this new use. He also inquired what road improvements the applicant is proposing, if this plan is approved.

A consultant, D. Steigler, said there’d be an estimated 26 percent increase in vehicle trips per day, and Park Center Road would be re-striped to create more lanes, as it currently has multiple access points.

Because there are homes to the east of this location, SDC’s Lewis Grimm said, “Perhaps they should do a balloon test so nearby residents can see how high the new buildings will be – since they’d be 30-percent higher than the existing ones.”

However, Strobel said there’s a great distance between where the new buildings would be constructed and the nearest homes. “And because of the trees and the topography of the site, they’d have a hard time seeing these buildings,” she added. “And on the north side, there’s another building owned by someone else that’s between this site and the homes to the north – which are set lower, anyway.”

After Grimm remarked that Route 28 is identified as a high-capacity transit corridor, SDC’s Jeff Parnes told Strobel, “The county’s Comprehensive Plan has a stop near that site connecting it to the Air and Space Museum Annex [in Chantilly] and on to Centreville, so you should be aware of it.”

Furthermore, said Parnes, “Maybe you could encourage that connection to be built. And could you see if Redskin Drive could be renamed?” Strobel replied that they could look into it.

He also wondered if there’s “a trail that goes along [nearby] Horsepen Run that people [eventually] working on this site could connect to.” Strobel wasn’t sure there was, but said she’d investigate.

Since this site is near Dulles International Airport, former Planning Commissioner Jim Hart said, “I want to make sure MWAA [Metropolitan Washington Airports Authority] knows about the higher buildings.” But Strobel reassured him that the applicant already had to fill out a form telling MWAA about the increased height.

Strobel said there’s a huge demand for datacenters today, with so many people using the cloud for data storage. But WFCCA’s Steve Chulick told her, “I’m concerned about the energy center’s effect on the environment, so I’d appreciate any green technology you could add to reduce the energy footprint.”

The proposal is scheduled to go before the county Planning Commission on May 4, so Parnes asked Strobel to return to the joint land-use committee in April. At that time, the committee will hear any updates to the plan and give its official recommendation.