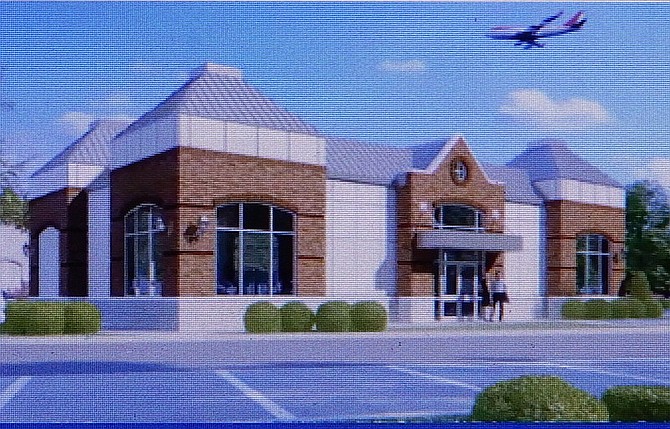 She didn’t say who the applicant was, but she said he’s seeking a rezoning and proffered condition amendment for almost an acre near Route 28. The site is at 4700 Centreville Road in the Westfields area.

“We want to rezone it from its current I-3 [Industrial] and R-1 [Residential] to C-6 [Commercial] to bring it into the Westone Plaza Shopping Center,” said Strobel. “We’re proposing a single, commercial building of approximately 3,200 square feet.”

The site would also contain 41 parking spaces and 15 percent open space. “The building will probably be used for a veterinary clinic,” said Strobel. Then, showing an artist’s rendition of the proposed structure, she said its architecture would be compatible with the other buildings already in the shopping center.

She said the applicant plans to provide a trail easement on the property. But, she added, “The topography makes it difficult to connect to other trails.”

At the conclusion of Strobel’s presentation, Sully District Council President Jeff Parnes said his organization has no objections, and the WFCCA endorsed the proposal. Said Parnes: “You have our good will to go forth with this project, contingent upon [county] staff’s approval.”

This matter is scheduled to go before the county Board of Supervisors in early April.