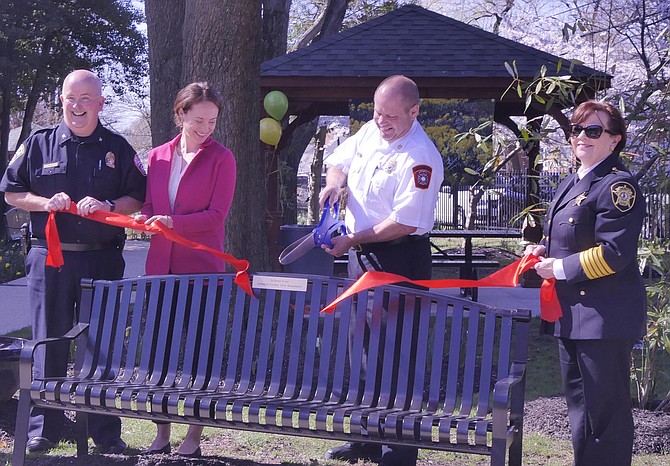 Oversized scissors sliced through a bright red ribbon to dedicate a new First Responders Bench at Culpepper Garden March 25 as a tribute to Arlington County first responders. State Senator Barbara Favola mentioned in her remarks that the timing was appropriate since the emergency responders had already been at Culpepper Garden three times that morning before the ceremony. She said it’s all about dignity and making people feel special. “Our first responders exemplify that.” 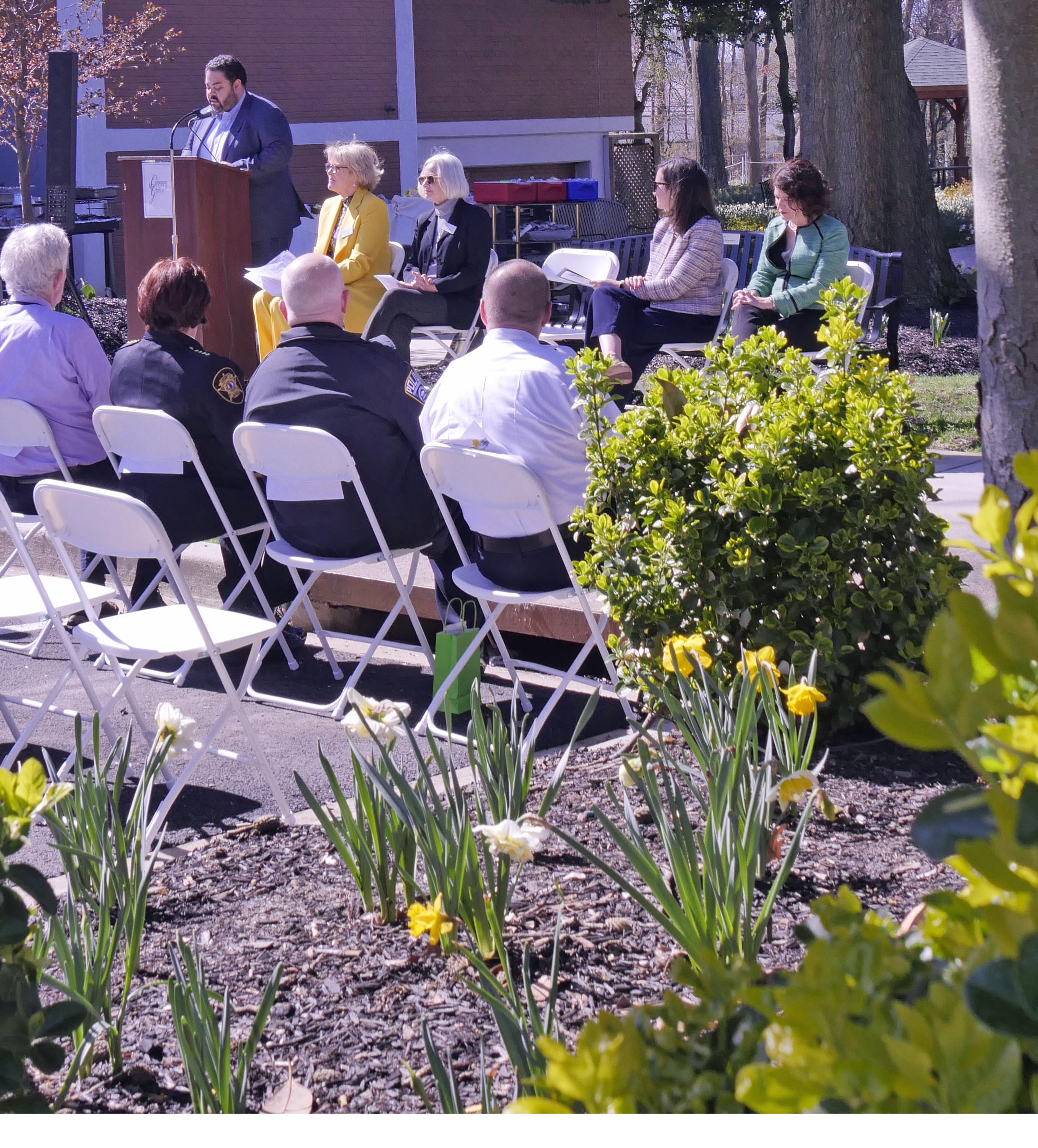 Police Chief Andy Penn joined County Sheriff Beth Arthur, Asst. Arlington County Fire Chief Joe Reshetar and Department of Public Safety Communications and Emergency Management Public Affairs Manager Hannah Winant, in cutting the ribbon for the new bench dedication. In addition, other officials were in attendance including Arlington County Board Chair Katie Cristol and other Arlington County Board members as well as County Manager Mark Schwartz, a number of members of the Culpepper Board of Directors and community leaders.

Zach Cafritz, representing U.S. Rep. Don Beyer (VA-8) quoted the Congressman’s comments in Thursday’s Congressional Record “recognizing the first responders for their heroism during the COVID-19 pandemic and every day for their bravery and selflessness. Arlington County’s first responders have been on the frontlines, making more than 300 trips in 2021 to Culpepper Garden, consistently risking their own well-being to protect and serve our community members.”

Marta Hill Gray, Executive Director of Culpepper Garden, recounted the history of the recent renovation of Culpepper Garden when construction hit right in the middle of the pandemic. Now the project has been successfully completed with an upgrade and transformation of the original independent living wing. She credits the widespread support of the community as well as the County for the success of this effort. Favola mentioned that Culpepper was the first senior low-income housing in the nation to receive Federal funding and also the County Board had to approve it. “It still gets acclamation today.”

The Friday Spring Opening event began a weekend of daffodil-centered activities including a Saturday Daffodil Walk for the public with tours of the 33,000 daffodils that had been persuaded to bloom for the event, as well as tours, refreshments and music.

Culpepper Garden built on the legacy of botanist Charles Culpepper who originally owned the land where Culpepper Garden is housed today and who was renowned for his diverse daffodil collection. Culpepper Garden set out to preserve this legacy with a six-phase garden restoration plan that was launched in the spring of 2021.

The garden transformation began with the planting of 28,000 daffodils that were featured in the Inaugural Spring Garden walk. Throughout the fall of 2022, volunteers planted an additional 5,000 bulbs along the Gibboney Walk as well as the Assisted Living Garden and front walkway. Two new pavilions plus several new benches were included in this first phase of the project.

The next step is Woodland Walk to connect the trails and complete the walking loop. Future plans include a koi pond, additional pavilions, picnic tables, and bird feeders with naming opportunities for the garden additions. The renovation is expected to be completed in 3-5 years.

Community attendees and officials stroll down the daffodil path at Culpepper Garden on Friday, March 25.