All sides and academic attorney weigh in 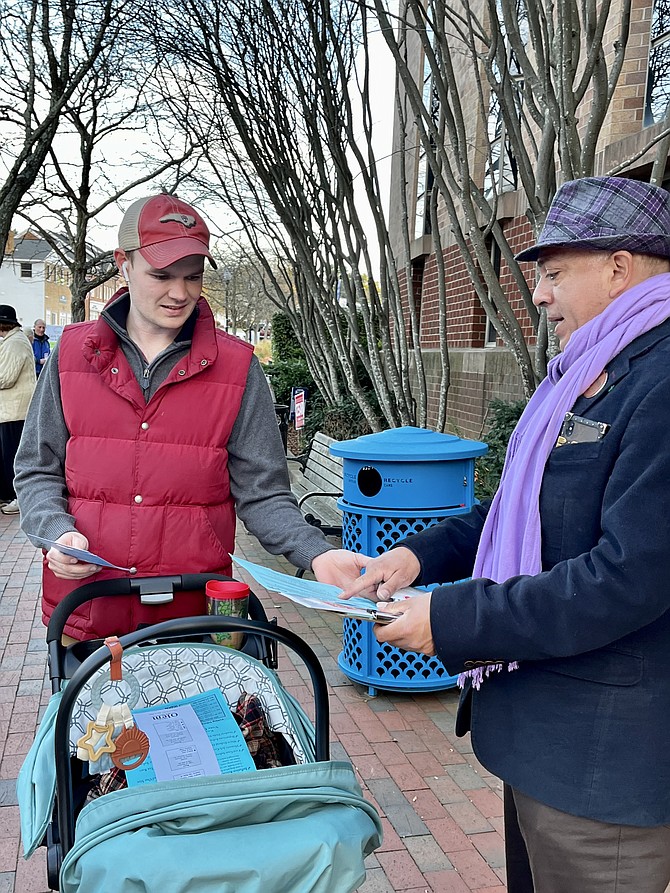 Cesar del Aguila, a candidate for Member of Council in the Town of Herndon, asks a Town of Herndon voter if he wants a Herndon Democratic Sample Ballot.

The Fairfax County Democratic Committee (FCDC) warned early voters in the Town of Herndon on Friday, Oct. 28, that a political action committee named Herndon Democrats is distributing a purported Democratic sample ballot in the non-partisan Town of Herndon elections.

The FCDC called the sample ballot "misleading" because it is "inaccurately indicating a Party endorsement in the non-partisan Town of Herndon elections." 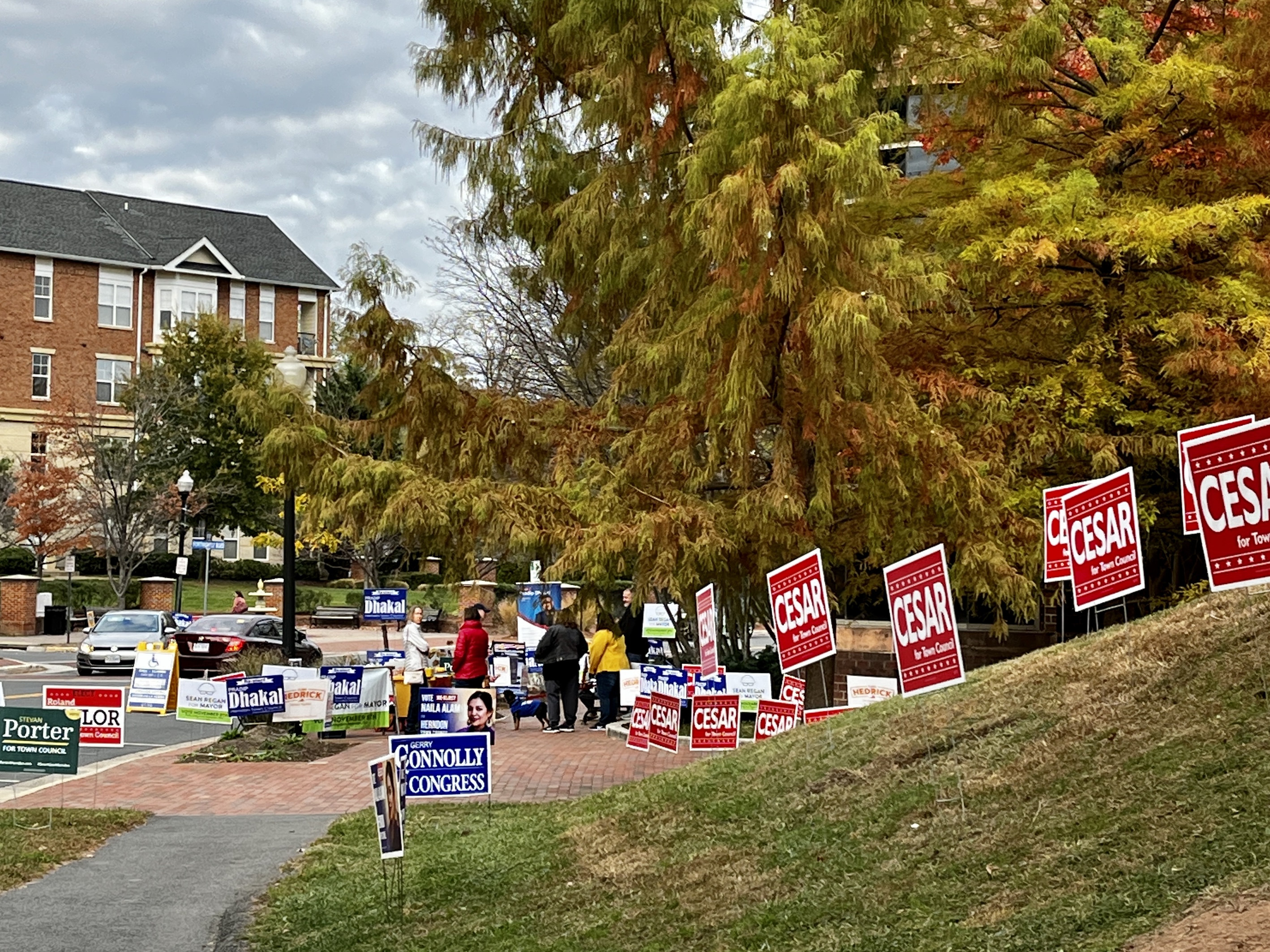 Political signs pop up surrounding the Herndon Fortnightly Library like mushrooms after a rain.

"The distribution of such sample ballots is troublesome and confusing for voters," said FCDC chair Bryan Graham. "This document, purporting to be a 'Democratic Sample Ballot,' is misrepresenting its affiliation with the Party."

"Party affiliation is a remarkably powerful factor in voting, even among individuals who identify as Independent," said Richard Kelsey, a former assistant dean and law professor at George Mason, now with the Impresa Legal Group. "We have great data to show that there's a really exceptionally small subset of people, somewhere less than one in 10 voters who can be flipped on an issue."

Herndon’s election was not the only non-partisan election attracting sample ballots this cycle.

“Election officials within the Commonwealth of Virginia are not allowed to provide party designation for local candidates on the ballot." (§ 24.2-613). According to the Town of Herndon Charter, "Candidates for town offices shall not be identified on the ballot by political affiliation." The only candidates that may have a party designation on a ballot are those running for federal, statewide, or General Assembly offices," according to the Virginia Department of Elections.

However, neither the Code of Virginia nor the Town Charter legally precludes political parties, such as the Fairfax GOP and Fairfax Democrats, from producing party-affiliated sample ballots, nor does it prevent PACs from doing so.

On March 22, the FCDC decided not to endorse in the Town of Herndon election. Heidi Meisenheimer of FCDC argued during the discussion, "We need an endorsement so we can elect a more representative town council …. To tell the voters which candidates match our democratic values."

Herndon Democrats, PAC-22-00018, is a new political action committee registered with the Virginia State Board of Elections. Cesar del Aguila, an FCDC member present at the failed vote to endorse in the Town of Herndon election, is the treasurer and principal custodian of the books for Herndon Democrats as of April 7, 2022. According to del Aguila, who distributed sample ballots during the first few days of early voting, candidates supported by the Herndon Democrats share Democratic values.

The Herndon Democrats "Democratic Sample Ballot" states at the bottom of its blue paper in a small, light font that it is "Paid for by Herndon Democrats, not authorized by any candidate or candidate's committee. It is Printed in-house."

'I am outraged that someone would mislead voters that the Fairfax County Democratic Committee supported a (sample) ballot when it was not. Please do your homework. Transparency is just a click away at https://www.fairfaxdemocrats.org/, said Herndon Mayor Sheila Olem.

On Sun., Oct. 30, U.S. Rep. Gerry Connolly, @ElectConnolly, VA-11, tweeted: "It has come to our attention that a misleading sample ballot, inaccurately indicating Party endorsement in the non-partisan Town of Herndon elections, is being distributed at early voting locations. Read the response from FCDC ffxde.ms/10282022PR.

Asked to explain the "sample ballot," del Aguila said, "So, there's a ruckus going around about the Herndon Democrats? It's a Political Action Committee, and it did an evaluation and endorsement of the candidates. They've endorsed Gerry Connolly and candidates that align with Herndon Democrats." According to del Aguila, there are about 24 members in the PAC.

After hearing about Connolly's tweet, del Aguila said, "We do not need his permission. That would be a violation of federal campaign laws. We would not put him in that jeopardy. We would not expose him to that."

Asked if they knew their names were on the sample ballot, Hedrick said he was unaware until he went to the polls on Thursday morning, the first day of voting. "I did not consent to have my name on the (sample) ballot. … I actually have an agreement with my employer that I will not accept or seek any party or de facto partisan endorsement." Del Aguila confirmed Sunday evening that Hedrick's name was slashed out with a black marker on the sample ballot. In addition, the header that said "Herndon Democrats Democratic Sample Ballot" was cut off the top. The ballots would be distributed like that, del Aguila said.

Scherff said, "I don't have to consent to be on a sample ballot."

Dhakal said, "Although I did not seek this endorsement, nor was I asked for permission, I am OK with the endorsement.”

Sean Regan said,” I did not ask for the endorsement but knew my name would be on their sample ballot before early voting started at the library. Regan added he wants it to remain there; del Aguila knew about the sample ballot.

Kelsey projected that the "intra-party squabble" within FCDC regarding whether or not to endorse Town of Herndon candidates this spring could have led to a group of people "who wanted FCDC to do one thing and they wouldn't do it, to basically use the political process to try to do what hadn't been done." Using sample ballots, especially Democratic, is a very powerful tool in Virginia," Kelsey said.

On each side of the header for the Herndon Democrats Democratic Sample Ballot stood a star-bannered Democrat donkey and a third similar donkey at the bottom. Candidates for the 11th Congressional District, Mayor, Town of Herndon, and Council, Town of Herndon, were clearly marked on the sample ballot.

The power of a sample ballot can unwittingly sway ill-prepared voters who have not done their due diligence in learning about the issues and candidate positions. According to Kelsey, the hallmark of U.S. elections is misleading advertising. "There's no form of tomfoolery that I have not yet encountered… Here's where you see it in a different fashion.”

Kelsey contends, "A subcommittee or a subgroup of individuals wants a very strong block of voters, in this case, Democrats, to believe that this slate has the official Democratic stamp of approval. So, what they do is they make a ballot that certainly looks like, smells like, feels like, tastes like, and it's got the imprimatur of the Fairfax Democratic Party on it saying, ‘Here's our slate.’"

Sample ballots are not illegal, and they can be powerful. Voters will sometimes vote with a sample ballot next to their voting sheet and mark it the way it looks on the sample ballot. There is nothing out there, according to Kelsey, that says it cannot be done. The law does not address the issue.