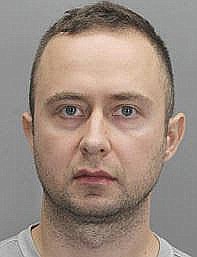 Fairfax County police have charged a Centreville man with two felonies in connection with the fatal shooting of a neighbor’s dog. Arrested was Roman Vyacheslavov Gorelov, 33.

Sully District police responded last Friday, Nov. 11, at 9:47 a.m., to the 5100 block of Brittney Elyse Circle, Centreville, for the reported shooting. Officers found the dog’s owner outside, next to his 2-year-old yellow Labrador and Beagle mix that had been shot.

“Officers learned Roman Gorelov [allegedly] shot the dog and then returned to his nearby apartment,” say police, “[They] contacted Gorelov by phone, and he surrendered to police.” The dog was taken to a nearby veterinarian hospital and pronounced dead.

Detectives from the police department's Major Crimes Bureau preliminarily determined that “Gorelov exchanged words with the dog’s owner in the breezeway of the apartments. Gorelov then displayed a firearm and shot the dog.” Police say the owner picked up his wounded animal and ran away from the breezeway, but Gorelov followed the man and then reportedly “shot the dog several more times.”

Police charged him with animal cruelty and reckless discharge of a firearm within 1,000 feet of a school. He was held without bond at the Adult Detention Center. Detectives executed a search warrant at the home and recovered the gun believed to have been used in the shooting.