National Park Service improvement is one of a few along the parkway. 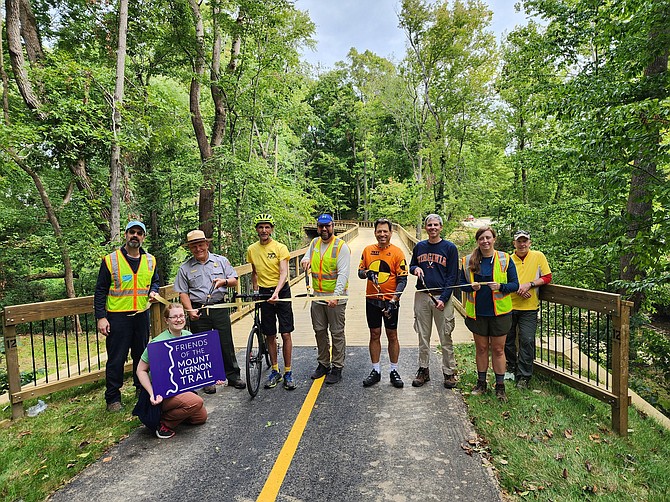 Bicyclists on the Mount Vernon trail have an easier, safer route on a section in Fort Hunt with the recent opening of a new bridge over a gully at trail mile marker four. Although this section has been open to cyclists for a few weeks, the ribbon was cut on the trail on Saturday, Sept. 25 to make it official.

In the past, the path went closer to the GW Parkway, across bridge #12 just south of Collingwood Boulevard. This trail improvement was designed to make this portion safer and install a straighter alignment and made the trail less steep leading to and from the bridge. Included in the project was a paved section from Waynewood Boulevard to Fort Hunt Road.

The NPS started this bridge replacement project in February 2022. This is the first of four planned major bridge improvement projects on the Mount Vernon Trail that the NPS plans to complete over the next five years.

South of this improvement, crews are building a new bridge across Dogue Creek and rehabilitating the trail along Mount Vernon Memorial Highway all the way from Richmond Highway to the Mount Vernon Plantation.

The Mount Vernon Trail (MVT) is an 18-mile paved, multi-use path that stretches from George Washington’s Mount Vernon Estate to Theodore Roosevelt Island. The National Park Service is responsible for the trail with help from partners including the Friends of Mount Vernon Trail and its volunteers. The trail is a hub for recreation and connects with regional and local parks and trails, including the Potomac Heritage, Rock Creek, Custis, Four Mile Run and the Woodrow Wilson Bridge Trails.