Driving on the sixth tee on Thursday, Marino played that day with Notah Begay III, in the tournament with a sponsor’s exemption from host and friend Tiger Woods. 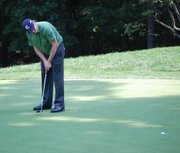 Driving on the sixth tee on Thursday, Marino played that day with Notah Begay III, in the tournament with a sponsor’s exemption from host and friend Tiger Woods.

After posting a first round 65 at the AT&T National, Fairfax native and W.T. Woodson graduate Steve Marino had lived Act I of every young golfer’s dream – winning his first PGA Tour event. That it was Tiger’s tournament, albeit with an absent host, was a bonus. The highlight of the round, in front of friends and family, was a kick-in birdie on eighteen.

“This is absolutely great,” he said to himself as he walked down the long slope to the green. “Totally cool.”

But as players well know, what the golf gods giveth on one day, they can taketh away the next. Marino, 28, failed to capitalize on his fine start, shooting 1-over for the next three rounds to finish T24, seven strokes back of winner Anthony Kim.

Early in the second round, Marino drove into the rough more often than fairways, but ground out a par 70.

“Even par out here is not awful,” he told the media afterward.

In his Saturday round, he struggled with his putter, and perhaps lost his focus during an unpleasant kerfuffle between one of his friends and Tour player Jeff Maggert. By the final day, one he started seven strokes behind the fifty-four-hole leader, he couldn’t summon the magical round he needed to get back in the hunt.

“I’m pleased overall,” Marino said afterward. “I played pretty well, but putted terribly after the first day. But it was special having my friends and family here to watch.”

He added that his great first round is one of the good thoughts that he will take from the tournament, that and a positive attitude he kept throughout.

&lt;b&gt;REMARKABLY, MARINO&lt;/b&gt; enjoyed a good week with new irons and wedges, plus a new caddie. G.W. Cable is on a trial run on Marino’s bag, giving up his day job at a Florida golf course for a few weeks. Marino’s friend from their junior golf days together, Cable was a star golfer at Oakton high school in the mid-1990s, and twice won the area’s prestigious Frank Emmett Schoolboy championship.

Throughout the tournament, Marino’s parents, Steve and Fran, followed their son. The elder Marino is a retired Air Force officer who now works on missile defense systems for Lockheed Martin. A scratch player (0.5 index at the Country Club of Fairfax), he often works with his son during practice sessions. During the tournament, Marino’s father reflected on Son’s recent play.

“He had a tough time at the Open and missed the cut. He has been belly-aching about his game lately, but it looked like everything was clicking in that first round,” he said.

Fran beamed motherly pride as she watched the media mob her son for sound bites and photos after his first round. As Marino broke from the camera scrum, dozens of kids pressed the rope line for autographs.

“This is the happiest I’ve seen him for a while,” Fran said as she watched. “I’ve seen him sign hats and programs before, but this is special.”

But she also admitted that her feelings regularly veer from joy to disappointment.

Steve won two national junior tournaments at Woodson during his high school years. He won the 1997 Virginia AAA high school championship and the 1999 Virginia Amateur. After four years on the UVa golf team, Marino played on the Canadian Tour in 2002 and 03, and then the Golden Bear and Grey Goose mini-tours in Florida during 2004 and 05.

On the 2006 Nationwide Tour, Marino gained exempt status through Monday qualifiers – 18-hole dogfights offering only fourteen spots to hundreds of contestants. That fall, he earned his card for the 2007 PGA Tour season through a T8 finish at the 2006 Tour Q-School (“PGA Tour Qualifying Tournament”).

Last year, the rookie won $1.2 M, made the cut in twenty-one of thirty-one tournaments, and had four top-ten finishes.

&lt;b&gt;MARINO ARRIVED&lt;/b&gt; at this year’s AT&T National ranked 54th on the money list with $1,093,911, with a second place finish in the Mayakoba Golf Classic in Cancun, a T4 at Hawaii’s Sony Open, and a T10 at Crowne Plaza Invitational at Colonial in Fort Worth. Adding $52,800 from the AT&T National, his total easily assures him full paying privileges for 2009.

At 6 foot, 180 pounds, Marino doesn’t have a buff, Tiger-like physique that other young players are sporting on Tour these days. He shuffles his lanky form about the golf course in a relaxed manner that fits his buddies’ assessment of his physical skills: “He has no jump shot.” Yet he manages to absolutely stripe a ball off the tee, a 292 yard average, and hit exquisite irons.

Asked to compare his experiences this year with those in 2007, Marino said, “Fewer surprises. I’m familiar with the towns and courses now. I know where to go and have learned from my rookie mistakes. I have much more confidence in myself now.”