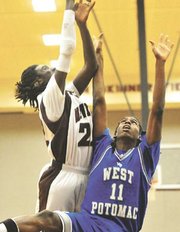 The Mount Vernon boys basketball teammates reacted to a question about Jones’ sub-par performance during the Majors’ season opener against Paul VI on Dec. 2. Jones, last season’s National District Player of the Year and a Division I signee, fouled out after scoring six points and grabbing three rebounds.

Jones bounced back with 24 points and five rebounds the following game in a win over Woodbridge. On Saturday, the Majors faced rival West Potomac and Jones once against showed why he earned a scholarship to Niagara.

"[Paul IV] face guarded me and I didn’t take opportunities to get open," Jones said. "I just came back the next day and got focused and prepared for the next game because you can’t remember the last game. You’ve just got to move forward."

Jones scored 13 of the Majors’ 14 first-quarter points, helping Mount Vernon overcome an early 12-5 deficit. He connected on 5 of 7 field goal attempts in the period, including 2 of 2 from 3-point range.

"We were having a hard time getting the ball in the basket," Jones said, "so I had to take over and get us in the game."

MOUNT VERNON head coach Alfonso Smith said Jones realized saw the kind of aggressive defense he is likely to face much of this season.

"He’s back where he needs to be," the coach said. "The thing that he’s seeing: teams are going to be very physical with him. He’s got to maintain his composure. … The challenge that we issued him coming into this game is to pick it up rebounding-wise."

Two other Majors joined Jones with a double-figure scoring output. Jesse Konadu scored 15 points and Stewart added 10. As a team, Mount Vernon was rewarded for its offensive aggressiveness with ample trips to the free-throw line. The Majors were 26 of 32 from the free-throw line, including 11 of 12 from Konadu. West Potomac knocked down 11 of 19 free-throw attempts.

"Taking charges, it shows our teammates that we’ve got their helpside," Stewart said, "so that makes us even more aggressive [with] man-to-man [defense]. It just shows we’ve got everybody’s back on the team."

WEST POTOMAC coach David Houston III attributed his team being whistled for numerous charges, along with other problems, to first-game jitters. Houston said the Wolverines will improve with time.

"The things that we did wrong are correctable," the coach said. "That’s why I told the kids in the locker room, ‘I’m very confident in our season coming up, because these are things that can be fixed.’ It isn’t like they were just a better team than us and they just beat us down to the ground. We just made mistakes. Against a good team, you can’t make mistakes."

West Potomac got off to a strong start, taking a 12-5 lead on the strength of a pair of 3-pointers by Daryl Copeland. But a 3-pointer from the corner by Jones tied the game at 14 near the end of the first quarter and the Wolverines never led again.

Copeland and Keevyn Hankins each scored 11 points for West Potomac. Houston said he expects the duo, along with Martez Redfearn, to be the team’s top scorers this season.

West Potomac rebounded Tuesday with a 60-52 victory at Wakefield. Redfearn scored a team-high 18 points and Copeland added 11. The Wolverines will host Lee at 7:30 p.m. Friday.

Mount Vernon travels to Washington-Lee on Dec. 18. Until then, the Majors can enjoy their win over a rival.

"It’s always good to beat the person right down the street because they always talk trash," Jones said. "We just had to show them who had to go out and get a victory. Mount Vernon all day."