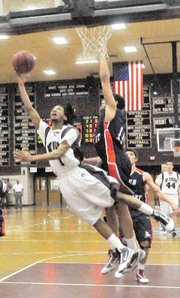 The players’ calls to Smith were not a request for advice on how to penetrate a zone defense or in anticipation of a postgame speech. No, the Majors were looking to collect. They had just accomplished one of their goals and it was time for Smith to keep up his end of the deal.

"Annually," senior Skylar Jones would later say, "we have him dance when we win a championship."

Facing No. 5 Yorktown at Washington-Lee High School, No. 2 Mount Vernon won, 68-52, and set the stage for Smith to bust a move.

Smith did "the chop" as the Majors celebrated winning their second consecutive district championship and the program’s third during Smith’s six-season tenure as head coach. The Majors, a team with high expectations after reaching the regional semifinals last year, now turn their attention to the Northern Region tournament and a chance to further prove themselves as one of the top teams in the area. Mount Vernon hosts Annandale tonight.

"When we took over the program that was a goal that we had," Smith said. "We wanted to be mentioned in the same breath as some of the better teams in the region; the programs that have been pretty longstanding that people have respected."

MOUNT VERNON held off a scrappy Yorktown team Monday. The Patriots came out hot and held first quarter leads of 9-2 and 12-6.

"They really kind of hit us in the mouth in the beginning of the game," Smith said. "[They] threw the first punch."

But the Majors settled down, closing the period on a 9-2 run. A jump shot by Jesse Konadu gave Mount Vernon a 15-14 lead in the final minute of the first quarter and the Majors led the rest of the way.

"I thought our guys did a pretty good job of holding their composure," Smith said.

Mount Vernon senior guard Robert Smith scored a team-high 19 points and dished out four assists — including an alley-oop pass to Jones, who threw down a two-handed dunk for a 64-49 lead in the fourth.

The point guard Smith, an all-tournament selection, finished with eight points and four assists against No. 6 Stuart in the semifinals and 19 points and five assists in the opening round against No. 7 Edison.

"We’re trying to make a statement this year and we’re going to finish up," Robert Smith said. "We are the best team in this region."

Jones, an all-tournament choice, scored 18 points and recorded five steals against Yorktown, and Konadu finished with 12 points and 10 rebounds.

Alfonso Smith spoke highly of forward Dylan Bischoff, who was a presence on the defensive end. The 6-foot-4 forward grabbed five rebounds to go with three blocks and two steals.

"I thought he played his best game of the season," the coach said. "We don’t like him as a starter, we like him coming off the bench. We say, ‘Hey, look, when you come off [the bench] you’ve got to bring the energy, you’ve got to hit the boards. … He was a shot in the arm."

Bischoff said being a reserve is motivation.

"Coming off the bench I feel like I’ve got to prove myself more since I’m not a starter," he said. "Once I got that first block I got my confidence up and just kept going."

Jack Earley led Yorktown with 20 points. No. 1 Hayfield was the favorite to meet Mount Vernon in the title game, but

A win against Annandale would mean Mount Vernon tonight faces the winner of Herndon and South Lakes.

Winning the regional title is Mount Vernon’s next goal, and the Majors have more than a trophy as incentive.

Said Robert Smith: "We’re going to teach him something else."