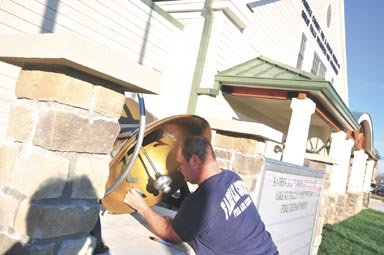 Firefighter Karl Sallberg writes the date on the bell in front of the Great Falls Fire Station, which was restored by county and volunteer firefighters from the station. The bell was in front of the old station for more than 50 years. Photo by Alex McVeigh.

Great Falls — FOR MORE THAN 50 YEARS, the original Great Falls fire station housed the men and women of the Great Falls Volunteer Fire Department. Now that the new station has been built, firefighters wanted to make sure at least one piece of the old building stayed put.

The large bell that was in the front of the previous building is back on a new perch, having been restored and rebuilt by firefighters of A shift serving at the station.

This text would be for the sidebar to this story. This is created by clicking on the "text box" inline option. Then you can cut and paste from the original document.

Capt. Kevin Edwards said the bell was sandblasted, restored and repainted by firefighters, which took about 50 man-hours. The Great Falls Volunteer Fire Department, which will maintain a presence at the new station along with Fairfax County, paid the $750 in material costs to restore the bell.

“Historically speaking, the bell would ring when people would request services,” Edwards said. “Traditionally, it’s also rung when a firefighter passes away, to sort of signal their last alarm.”

THE BELL, which staff estimated to weigh around 700 pounds, is made of cast iron, rather than the usual bronze. Firefighter Karl Sallberg did a lot of the work, repainting the bell with a bronze coat of paint and also helping restore its mount and other hardware.

“It’s part of the community’s history, and we wanted to make sure it was around for the future.”

“When the crane was knocking down the old station, we saw the bell and decided to grab it. It wasn’t in good shape, but we thought we might be able to fix it up,” Sallberg said. “We guessed it’s about 80-90 years old, but I looked during the work to see if there was any sort of date stamp, and there wasn’t.”

Joan Bliss, president of the Great Falls Volunteer Fire Department, said restoring the bell was important to everyone at the station.

“It’s part of the community’s history, and we wanted to make sure it was around for the future,” she said.