Potomac — Kate McMahon planned her future before she reached her teens: She would be a basketball coach and work with her father, Pete McMahon.

Growing up, Kate viewed her dad as a role model and wanted to follow in his footsteps. Pete played basketball at the University of Massachusetts. Kate started competing in the sport before the age of 10. Pete started coaching Kate when she was a third-grader. Kate saw her father in action and developed visions of a coaching partnership.

"Sixth grade was when I first decided I wanted to be a coach and I told [her father] then that I wanted to coach with him," Kate said. "I guess, technically, our plans started when I was about 12."

Kate McMahon, left, and Pete McMahon are in their fourth season coaching together at Churchill.

Thirteen years later, Kate and Pete McMahon are in their fourth season with the Churchill girls basketball program. Kate, 25, was the JV head coach for two years before taking over the varsity team last season. Pete, 58, has been her assistant every step of the way. Last season, the duo led the Churchill varsity to a 15-8 record and the 4A West regional semifinals. This year, the Bulldogs are 8-4 and have won four straight and six of their last seven. On Jan. 14, Churchill avenged last year’s season-ending playoff loss to Whitman with a 51-21 victory against the Vikings.

"I did think she was serious," Pete said of Kate voicing at a young age her desire to coach with her father. "She always wanted to do it."

From the third grade through high school, Kate played basketball for Pete in some capacity, including Catholic Youth Organization and AAU competition. Kate picked her father’s brain, soaking up his basketball knowledge. During tournaments with long breaks between games, Kate would sometimes join Pete to watch other teams play and study their strategies. She did this at the age of 12, rather than passing time like an average child.

"I just love the game," Kate said. "I knew that I was a good player, but I knew I was never going to be a Division I basketball player — I just don’t have the athleticism. I love watching it, I love analyzing players and offenses and defenses. I guess it’s kind of odd that a 12-year-old would be thinking about coaching but I just always wanted to. A lot of it is also that [my father] was my role model and he was a coach and I wanted to do what he did."

Kate played high school basketball at Richard Montgomery in Rockville and went on to play shooting guard at Division II Ursinus College, located 40 minutes from Philadelphia. After graduation, Kate accepted a teaching position at Churchill and took over as JV head coach for the 2007-08 season. Pete, who works in the engineering and construction business, joined her as an assistant and the two have been working together since.

The role reversal opened a door for potential awkwardness. Pete is older, has more experience and is used to being in charge — as a coach and a father — but both insist their relationship is in working order. Kate is the head coach, no questions asked. Plus, Kate and Pete are so familiar with one another’s thought process that they are often on the same page with coaching decisions.

"Anytime you can help your kids out with their chosen profession, it’s fantastic — that’s No. 1," Pete said. "We’ve been studying games for so long together it’s almost like we’re [coaching] together. … We usually get a consensus on everything we do. If there’s a bad idea, the other one [says something]."

Kate remembers yelling at her dad during a game this season, but the two have a close relationship, so they laughed it off afterward.

"In that sense, it’s easier than working with someone else," Kate said, "because you don’t really feel like you’re going to hurt them personally."

During practice, Kate works with the guards and Pete works with the forwards. During games, Pete keeps track of substitutions, allowing Kate to focus on what’s happening on the floor — something Kate said is an advantage for her. During timeouts or breaks in the action, either coach will address the team.

"They’re on the same page with everything we do in practice," Churchill senior forward Giulia Giannangeli said. "Their styles are pretty much the same."

Junior guard Emma Barnett has worked with Kate and Pete for three seasons, including time on the JV.

The varsity level is "a lot more strict and competitive," Barnett said, "so they stepped it up."

Churchill started the season 2-3, including a 52-46 overtime loss to Northwest on Dec. 20. Despite the loss, Kate said the Bulldogs started to turn things around against the Jaguars and have since won six of seven. Last year, Churchill started 14-4 only to lose four of its final five games. This season, the Bulldog coaches are hoping rebounding from a slow start means Churchill will be playing its best ball late in the season. 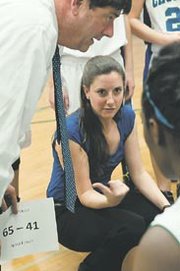 Churchill head girls basketball coach Kate McMahon instructs the Bulldogs along with her assistant and father Pete McMahon during Friday’s win over Whitman.

"We got [the players] to buy into our game plan, our season plan," Kate said. "From the beginning when we had our first couple loses and it was just a negative stretch, we just kept telling them last year we started off really strong and kind of finished a little bit weaker. This year, we’re fixing things in the beginning of the season … and now we’re headed toward the end of February. I think this year, more than maybe even the past couple years, they really believe us because we’ve been coaching some of them for four years."

Kate said one of the most important coaching elements she learned from Pete is how to communicate with players.

"One thing I really took from him is that you have to figure out how each player will respond," Kate said. "You can’t just have one coaching style, either … intense [and] yelling the whole time or really laid back. I think that he did a really good job of figuring out how you should talk and work with each player, so I’ve tried to model that."

Churchill will host Clarksburg at 7 p.m. on Jan. 21. As the postseason approaches, Kate and Pete will try to keep the Bulldogs playing well — which starts with their strong coaching relationship on the bench. A relationship built when Kate was a young player who wanted to be a coach, like her father.

"I’ve seen some other fathers and daughters coach and play in [recreational leagues] and AAU and I think it was really different," Kate said. "He never favored me or had a game plan for me. It was just so easy because I was able to talk about not just what I was doing but what the team was doing and what we should be doing better. I think it was a big advantage being able to discuss throughout."