Potomac — Shira Racoosin laughs when it’s mentioned and isn’t quite sure how to feel about it, but for the time being, she’ll take it as a compliment.

A junior guard on the Churchill girls’ basketball team, Racoosin’s skill set — most notably her ability to shoot an actual jump shot — has been compared to that of a male hoopster. While Racoosin appears slightly embarrassed about discussing the topic, her athletic ability makes her one of the top scoring threats on a Bulldogs team ranked No. 11 in the latest edition of the Washington Post’s top 20. 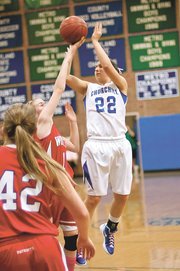 Churchill guard Shira Racoosin’s athletic ability at times gets her playing style compared to that of a male.

According to stats from the Post’s Web site, Racoosin is Churchill’s second-leading scorer at 8.8 points per game. Racoosin struggled with her shot during a 36-29 victory against Wootton on Jan. 27, but managed to score 11 points and showed her talent in spurts. She scored six points in the first quarter by attacking the basket and hitting short jumpers, and knocked down a 3-pointer early in the fourth quarter. After Wootton cut Churchill’s lead to four with less than one minute remaining, Racoosin stepped to the line and knocked down a pair of free throws — giving her 14 in a row at the charity stripe.

"I know that I missed a lot of shots, but at a time like that you just can’t worry about how many you’ve missed," Racoosin said. "You have to worry about the one you’re about to make. That’s what I always think about at the line."

Racoosin said her ability to create her own shot makes her a more aggressive player.

"I definitely didn’t get it from my parents," Racoosin said with a laugh. "I’ve always been able to jump — create my own shot. Getting higher than everyone else gives me the ability to make shots. A lot of girls can’t create their own shots, that’s why they say I play like a guy — guys do that. It brings a lot to our offense. In terms of being an aggressive player, it’s very helpful."

How does she feel when someone says she plays like a guy?

"I’m kind of used to getting it all the time," Racoosin said, "but at this point, I guess I’ll just take it as a compliment."

Sarafina Arthur-Williams led Churchill with 17 points and 13 rebounds against Wootton during a "Power in Pink" contest to help raise cancer awareness. The Bulldogs were playing in honor of fellow Churchill student Nachu Bhatnagar, who was diagnosed with cancer.

Churchill improved to 14-2 with a 54-50 victory against Richard Montgomery on Jan. 30. The Bulldogs have won 13 straight after a 1-2 start that included a five-point loss to Damascus and an eight-point loss to defending 4A state champion Gaithersburg.

"They’re a resilient group," McMahon said. "We talked to them from the beginning that we’re young and you have to learn the defense and we’re playing a lot of tough teams right at the beginning. They didn’t get down because it wasn’t like they weren’t in those games."