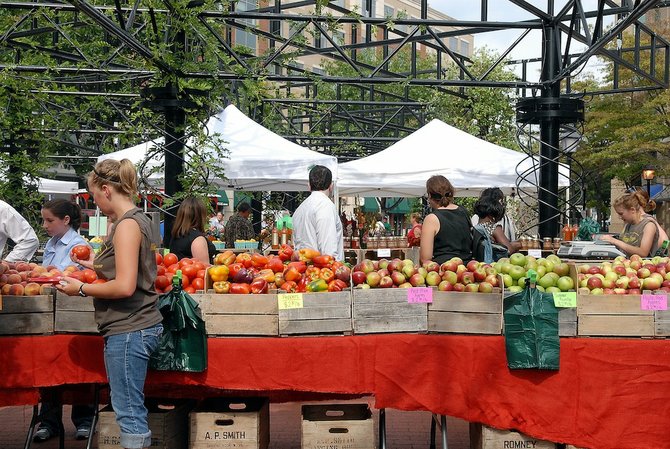 Organziers of the Upper King Street Farmers Market say they could not guarantee a full season to the vendors because of new insurance requirments from the city government. Photo by Louise Krafft.

Alexandria — The tomatoes aren’t the only bumper crop at the farmers’ market this year. Liability insurance has also blossomed in recent months, creating a fresh sense of uncertainty at two Alexandria farmers markets.

The Upper King Street market and the Four-Mile Run farmers market are both operating with interim agreements because they have been unable to reach an agreement with city officials over liability insurance. At issue is a new requirement that some of the city’s markets carry $2 million of event liability insurance, protecting the city and the market organizers.

“From my perspective, this is a no-brainer,” said City Attorney James Banks. “I would be committing malpractice if I didn’t recommend this.”

The new requirements have put market organizers in a squeeze. Because the smaller markets are often put together by neighborhood organizations and civic associations, they were unable to come up with the money needed to purchase the level of insurance the city started asking for this year. As a result, Upper King Street and Four-Mile Run were both issued interim status — a kind of limbo that has spooked some vendors seeking a stable market throughout the season.

THE NEW REQUIREMENT seemed to come out of nowhere earlier this year, just before the beginning of the market season. The nonprofit that runs the West End farmers market was able to negotiate an arrangement with the city that included the new event liability insurance, part of a larger agreement that transferred authority of the market from the city to a nonprofit organization. The farmers market in Del Ray was not asked to add the insurance because it operates on a special-use permit from the mi-1990s, and the city operates Market Square.

Both markets are now in a state of uncertainty, operating on interim agreements and waiting for a final resolution to the new insurance requirements of the city. City officials hope to have some kind of final agreement for the season in place before the end of June, although the details have yet to be worked out. Meanwhile, city officials say they aren’t about to start shutting down markets mid-season.

“We are not about to shut anybody down,” said Jack Browand, division chief for the Department of Recreation, Parks and Cultural Activities. “If we are not able to come to a resolution on the insurance issue, we will extend the interim agreements.”

As farmers’ markets become increasingly popular, city officials say they have become concerned about a lack of consistency in how they are operated. The scattershot nature of standards has become increasingly troubling because organizers of new farmers markets are approaching the city all the time. That includes potential new markets on the waterfront, in north Old Town at Montgomery Park and in the Carlyle neighborhood. Future redevelopment at Potomac Yard might create yet another new market there.

“If something were to happen at one of these farmers’ markets, people would be looking around for someone to sue,” said Banks. “The city is perceived to have deep pockets, so it’s my job to suggest we protect ourselves.”

“This is a partnership we have with the organizers of the farmers markets because we are not charging for the use of city property,” said Browand. “The organizers could pass the cost of the insurance on to the vendors.”

At the Upper King Street Market, talk of the city’s new requirement has turned to one of timing and scale. Because the new requirement was issued just before the opening of the market this spring, when organizers were trying to attract vendors for the season, some organizers felt the process was counterproductive. Others have questioned why $2 million worth of insurance is necessary. Considering the market has operated successfully for years without any event liability insurance, the sudden requirement struck many as arbitrary.

“We’re not selling firearms here,” said Trey Hanbury, president of the Upper King Street Civic Association. “The bottom line for us was that it was very difficult to attract vendors without a memorandum of understanding, which is why we still have vacant space at our farmers’ market this year.”