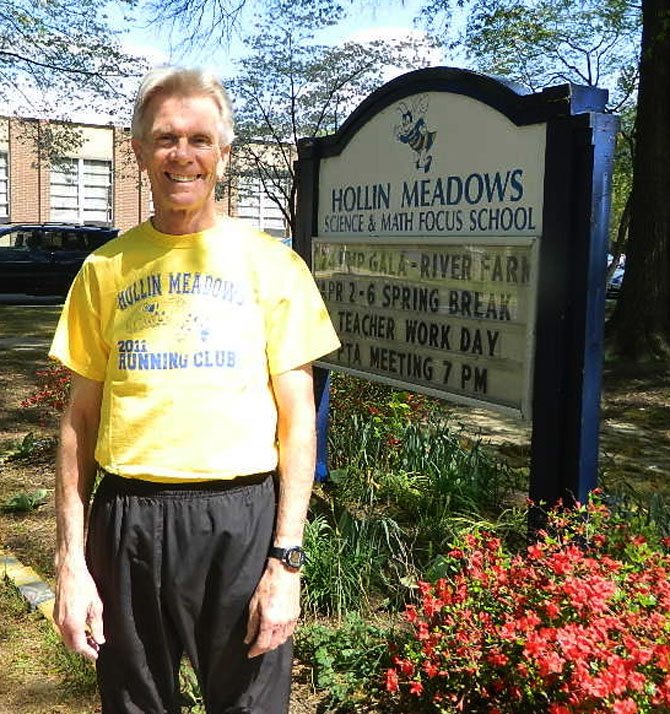 Sixty-four years old, he’s lean and light on his feet, his hair thick and white, and he glows with health and resilient cheerfulness.

He’s also a veteran of 20 Marine Corps Marathons and 17 others in places like Michigan, New York City, Hawaii and the Caribbean. And in 1988 he ran in the Greece Marathon following the “Original Run” from the Plains of Marathon into Athens ending at the Olympic Stadium. That’s a total of 73 marathons.

“I enjoy it just because I feel good when I run,” he said. “I feel it benefits my health overall. I like the challenge of it too. There’s a certain mystique to that distance (26.2 miles).”

His fastest time in the Boston was two hours 34 minutes in 1981 when he was 34. His time now is a little over four hours. Training, he runs 45 to 50 miles a week, then two weeks before the race he drops back to three miles a day to give his body “some rest.”

Growing up in Detroit, Mich., Coffman ran track in high school and competed in the quarter-mile, but no long distance events. A few years later as a young Marine in the early 1970s stationed in Hawaii he started training for the Marine Corps’ quarterly three-mile run for the physical fitness test. He found he enjoyed it. About that time Frank Shorter in 1972 won the gold medal in the marathon for the Olympics. That captured his imagination.

Then Dr. Jack Skaff started up the Honolulu Marathon Clinic and Coffman decided he’d go for the challenge. “I thought it sounded like a good thing to do and so I just gradually increased my distance, and of course the Marine Corps encouraged me in my fitness and training, so I had my first marathon in Honolulu in December, 1973. That’s how I started.”

After his stint in the Marine Corps ended in 1975, he returned to Michigan and to Michigan State University to work on his master’s degree in adapted physical education, then beginning his first teaching job. In 1977, he fell in with a running group called the “Belle Isle Runners” and found them excellent company.

“Some of them had run the Boston Marathon. I thought this might be another goal for me, to try to get in the Boston Marathon and run that. Eventually I qualified,” he said. He particularly enjoyed the company of Bob Keiss, his mentor, now 83 and still running, though no longer the marathon.

In 1978, Coffman ran his first Boston Marathon. The winner that year was Bill Rodgers, known as “Boston Billy,” famous for winning the Boston Marathon four times.

A few months later running in the Old Kent Riverbank Run in Grand Rapids, Mich., Coffman found himself in another race with the famous “Boston Billy.” “I thought I’d see if I could stick with him for the first mile,” Coffman remembered.

“So we go through the first mile there in the 15-mile race and it was five minutes and 12 seconds and I’m really running pretty hard, and of course there’s another 14 miles. He looks down at his watch and I’m just behind him, and he kinda goes ‘D---! Too slow!’ And he just takes off like a rocket and of course I’m gasping for air.”

Humbling too, he recalled, is the Boston Marathon’s famous Heartbreak Hill. But “once you get on top of it and start going down it’s just fantastic and it is pretty much downhill from there to Boston.”

An inspiration too for Coffman is knowing that his wife Jackie will be waiting for him at the finish line. With her will be his granddaughter Julia, 6, who last year joined him running the last 75 yards over the finish line. He gave her his medal. She’s been “in training” for this year’s finish, Jackie Coffman said.

Steve Coffman also encourages running at Hollin Hall Elementary School where he coaches the Running Club along with coordinator Denise Osini and numerous parent and teacher volunteers, including student volunteers from the West Potomac Track Team. For young people, his advice is “just get out and start. Try a shorter distance just to see if you enjoy it. Then gradually add on distance.”

He encourages young and new runners to participate in Fort Hunt Park’s mile-long “Fox Trot Run” which takes place the weekend before Thanksgiving. The Hollin Meadows Running Club turns out in force for the event. “A great thing for kids too is the Marine Corps run held in the parking lot of the Pentagon the day before the Marine Corps Marathon at the end of October,” he said.

The Hollin Meadows Running Club has about 100 members, about one-fifth of the school.

Look for Coffman this Monday, April 16, Patriots Day, in the Boston Marathon’s third wave that gets underway at 10:40 a.m.