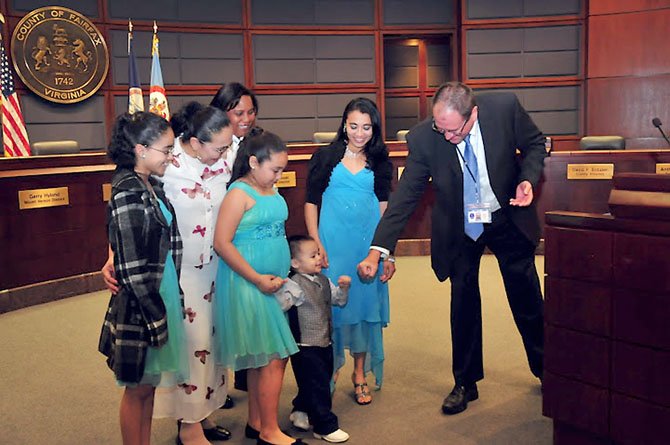 Following are excerpts from an audio of the 9-1-1 call:

*Dean: "I’m going to ask you some questions and give you some instructions, okay? He’s not breathing at all? Does anyone there know CPR?"

*Almendarez carefully answers Dean’s questions in English. Switching to Spanish, she tries to calm down her mother, Maria Isabel, and sister, Maria Celaura, who can be heard wailing in the background and frantically yelling, at times drowning out the voice of Almendarez.

Dean struggles to hear the little girl over the din of other voices.

*Dean: "Okay, I need everybody who is not trying to help the baby to stop talking. Tell them to stop talking…Put the baby on the floor, on his back. Nothing behind his head or shoulders. Take his shirt off… Push down on the forehead and pull up on the chin."

*Almendarez translates Dean’s precise CPR instructions to her mother. About halfway through the eight-minute call, Almendarez stops translating as Christopher erupts in sobs.

*Dean: "Is he crying now? Is that him crying?

The paramedics arrive a few seconds later, and the 10-year-old breaks down crying for the first time.

*Almendarez: "Thank you, Thank you."

During the week of April 8-14, the Fairfax County Department of Public Safety Communications (also known as the 9-1-1 Center) celebrated Public Safety Telecommunications Week. In 1992, Congress established the second week in April as National Public Safety Telecommunications week to bring recognition to the more than 200,000 men and women of 9-1-1 who everyday - as the First of the First Responders - are instrumental in helping save countless lives and dispatching law enforcement, fire rescue and emergency medical services personnel. Since DPSC was established in 2005, the department has celebrated this week to express and honor the personnel of DPSC for the outstanding services they provide to the citizens of Fairfax County, the police department and fire-rescue department.

Visit the Fairfax County Government Center lobby during the week of April 9-15 to view a public education display about 9-1-1 in Fairfax County.

On the morning of July 13, 2011, Franconia Elementary fifth-grader Cynthia Almendarez was at home with her mother and 12-year-old sister when she noticed something odd.

Her 18-month-old nephew, Christopher, who was usually cruising around the house and making typical toddler sounds, was quiet and gasping for breath.

"I was scared because his face started to turn purple," Almendarez said. But she remembered something she learned at school.

Almendarez quickly picked up the phone and reached operator Cheryl Dean, who was just starting her shift.

What the 10-year-old did next saved Christopher’s life.

She was recognized for demonstrating exceptional bravery and heroism to save a life in a critical time using 9-1-1.

"I was surprised by her composure," Dean said, giving the little girl a hug after the ceremony. "I had to trust that she could convey the information I gave her. She remained calm until EMT’s arrived on the scene. She’s pretty amazing."

Christopher, whose breathing problems were caused by an infection, turned two-year-old last November. When Dean picked him up, he squirmed to get down and run around the lobby.

"He’s a typical, healthy two-year-old, thanks to Cynthia’s composure. She saved valuable time and Christopher’s life," said Roy Oliver, Assistant Director of DPSC. "I can't even comprehend putting myself on that side of the phone," Oliver said.

Oliver said Dean, who has been with the county for two years, was pretty amazing too.

"She was doing what she always does. She didn’t think anything of it until a supervisor listened to the tape, and realized that there was a special story here," Oliver said.

Since July, Almendarez has received numerous awards from local and national 9-1-1 agencies, as well as a commendation from the Board of Supervisors. In December, she received the "9-1-1 for Kids" award at Franconia Elementary. Inspired by her story, DPSC employees gave her family Christmas presents.

"I don’t think I’m a hero," she said, even though many friends and family would disagree. "I’m just really happy that he’s okay. I love spending time with him."