Arlington native was saved by CPR as a child. 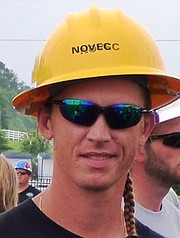 Arlington native Nicholas Reckmeyer, a 35-year-old first class NOVEC line technician, saw a young woman on the ground near a car holding a 29-year-old man while Reckmeyer and his family were traveling in their van that Friday evening.

According to a release from NOVEC, Reckmeyer told his wife he was going to help since he had been trained by the NOVEC in first aid, CPR, and automated external defibrillator (AED) use.

“I rushed over and asked if anyone had called 911,” he said. “They had not, so I pulled out my cellphone.”

Reckmeyer felt and looked for a pulse and respiration on the bleeding 29-year-old man. He found none.

“I had the woman lay the man’s head flat,” Reckmeyer said. “I checked his airway and then began CPR chest compressions. After about a minute of CPR, he began gasping and the young woman started yelling that he was breathing. But I knew gasping was a sign of cardiac arrest because of my experience in the Gaff-n-Go Rodeo.”

At the annual Gaff-n-Go Lineman’s Rodeo, judges score journeyman and apprentice linemen from 14 electric utilities in six states on their speed, accuracy, and safety skills, including CPR.

“After three minutes of chest compressions, I was getting tired and worried that he was not going to make it,” Reckmeyer said. “The older man took over while I checked the victim’s vitals, but he still had nothing. Since I noticed the older man was not doing compressions properly, I continued the CPR. After another 30 compressions, the younger man started coughing and moaning. I checked his pulse. He had a faint heartbeat and I could see his chest rising and falling with his breathing. About this time the ambulance and paramedics were pulling up and came over to help. I let them know they should get an AED on him just in case his heart stopped again. They did.”

“As I was walking back to the van I saw the man sitting up on the stretcher in the ambulance,” Reckmeyer said. “A paramedic and police officer stopped me and said the man was alive because of my quick action in a stressful situation.”

Reckmeyer explained to his wife and children, who watched from the van, that “in any given situation if you can help someone in need, regardless of whether you know them or not, you should help.”

Reckmeyer credits the bi-yearly CPR and AED training at NOVEC for saving a life. He said, “Although I am the one who performed CPR, I must give credit to all those people at NOVEC who helped me be prepared for the situation and the folks responsible for the Gaff-n-Go Rodeo for including CPR as an event.”

“We are thankful to the passerby who stopped to help and render aid to the man during this medical emergency,” said PFC T. J. Wright, public information officer with the Fairfax County Police Public Affairs Bureau. “Having been trained in CPR and able to utilize the skill in attempt to save another man's life is commendable and he should be proud.”

“We’re proud of Nick and all our line technicians,” NOVEC President and CEO Stan Feuerberg said. “These men often work in terrible weather conditions when power outages occur. They must be mentally sharp and physically tough to work around energized lines. And as Nick proved, they need to know exactly what to do when it really matters.”

Reckmeyer almost drowned in a backyard swimming pool when he was two years old. A neighbor performed CPR on him and saved his life. Reckmeyer said, “Now it was my turn to use CPR to save a life.”