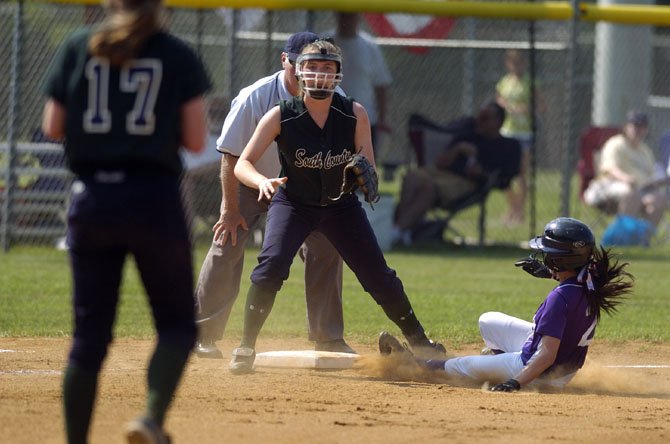 One of Lee's toughest Patriot District games ahead will be against visiting South County (pictured) later this month on Tuesday, April 24. Photo by Craig Sterbutzel.

Springfield — One week following spring break has seen the Lee High girls' softball team already match last year's win total of five. With the second half of the regular season ahead, the Lancers are now set to delve into the bulk of their Patriot District schedule, where they will hope to earn several more victories.

"We are very excited that we have equaled last years win total at this time of the season," said Lee head coach Suzi Willemssen. "We continue to build on last year's goal of becoming relentless competitors. Three of our victories we have come from behind to win, with two being in our last at bat. Plus, in our most recent loss, we were down 11-0 but battled back to lose 11-10 with the tying run on third base to end the game.

It's been a true team effort with everyone contributing in some fashion."

That slugfest 11-10 defeat, against West Potomac, in which the Lancers nearly overcame the huge deficit, was the Lancers' fifth and final game of the local spring break tournament it was a part of in recent weeks.

Earlier in the tournament, Lee had lost its first game back on March 24. But when the tournament resumed again a week later on the afternoon of Saturday, March 31, the Lancers edged Edison, 8-7, in an exciting game between the two local rivals. The Lancers played Yorktown High later that same day, a 4 p.m. start, and lost to the Patriots by a 9-4 score.

Two days later, on Monday, April 2, Lee went up against Mount Vernon High and won another one-run affair, this one by a 5-4 score. That game started at 10 a.m. A little while after the conclusion of the game with the Majors, the Lancers played a second game with a 2 p.m. start against West Potomac. The game with the Wolverines, fellow members with Lee of the Patriot District, did not look good as West Potomac built up their large 11-0 lead. But Willemssen's squad showed lots of fortitude in rallying from behind and ultimately cutting the large gap to one run in the loss.

So, over the spring break tournament, Lee went 2-3 with the wins coming over Edison and Mount Vernon. Three of the five games were decided by a single run.

PRIOR TO LAST week's spring break, Lee had played five non-spring break tournament games to start the season, winning three of them. The Lancers, on the evening of March 15, opened their season schedule with a convincing 19-1 win at Falls Church High School. That win was followed by three straight losses, including 7-0 losses to Patriot District opponents Lake Braddock on March 21 and South County on March 23. But Lee got back into the win column when it defeated district opponent T.C. Williams, 11-1, in a road game on the evening of March 27.

The win over the Titans was a good momentum builder for the Lancers going into the bulk of spring tournament play.

Coach Willemssen said a key factor in Lee's ability to go 5-5 over the first half of the season has been the fact that both starters and substitutes have contributed to the Lancers' success.

"The players know that they could be called upon at any time to start, pinch-hit, run, etc.," said Willemssen. "They know they need to be prepared for their moment and they have done just that."

LEE'S STARTING PITCHER, freshman Courtney Cox, has settled nicely into the high school game and given the Lancers a nice presence on the hill this season. The plan going into the spring was that Cox would split pitching time with senior Amanda Layton. However, an injury to Layton prior to the Lancers' season opener resulted in ninth grader Cox going full time at the important position.

Layton has just recently returned to the lineup which should give the Lancers a solid one-two pitching punch the remainder of the season.

"We'd like to send them out in style," said the upbeat Willemssen, who would love the 12th graders to conclude their high school careers with lots more wins.

Lee will be part of an extra special game next month when the Lancers meet district opponent W.T. Woodson in a home game on the evening of Friday, May 4. The game will be part of `The Match Awareness Night,' to promote the bone marrow registry program.

Long time Robinson head Coach Barry Gorodnick is battling lymphoma and is need of a bone marrow transplant and looking for a donor match. Willemssen's son played football at Robinson when Gorodnick was the Rams' defensive coordinator.

"Coach ‘G’ has done a lot for the softball community," said coach Willemmsen, who said the May 4 game against Woodson will help promote awareness of lymphoma as well as honoring those who have battled the disease from the Lee community.

The May 4 meeting against Lee will be the second game between the Lancers and Cavaliers this spring. The first scheduled match-up was set for earlier this week when the two teams met on Wednesday, April 11 at Woodson.

This Friday night, April 13, Lee is slated to play a game against visiting district opponent Annandale High at 6:30.