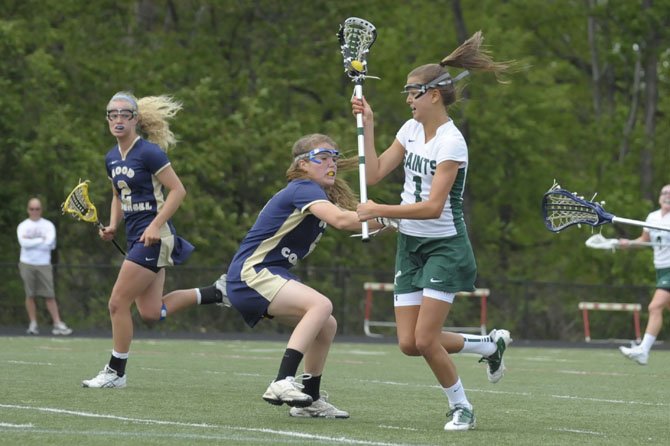 Alexandria — Pressure is nothing new to the St. Stephen’s & St. Agnes girls’ lacrosse program. Consistently ranked as one of the top teams in the nation, the Saints can expect to receive an opponent’s best effort on a game-to-game basis.

While competitive situations are the norm, an April 14 contest against Good Counsel presented a motivational scenario that captured the Saints’ attention.

Last season, SSSA lost just two games en route to another state championship. One of those losses, however, came against Good Counsel — an 11-7 defeat during the Saints’ own Spring Fling event. One year later, SSSA had a chance for payback and the Saints weren’t going to let the opportunity slip away.

"At St. Stephen’s, we always have a target on our back, so we always have to prove who we are and every single game we’re trying to prove something to someone. Definitely, with all these people watching there’s a lot of pressure, and we’ve just got to come out strong and do what we do best."

The Saints defeated Good Counsel 13-6 on Saturday during the 21st Annual St. Stephen’s & St. Agnes School Spring Fling — an event featuring some of the nation’s top teams, including schools from New Jersey, New York and Pennsylvania. SSSA led 10-6 with less than three minutes before pulling away with a trio of late goals.

"We said to the girls, ‘This is a big game for you. Last year you lost at your Spring Fling, 11-7,’" Saints head coach Kathy Jenkins said. "[Good Counsel] had a very strong team last year … they had probably six or eight outstanding DI players. And I [said], ‘So this year they’re a little bit down. We want to come out and play our game, play strong, move them, but we need to make sure with their goalie [Meagh Graham being a standout], we have to make good decisions on our shot selection."

Jenkins said junior attacker Carly Reed, the Saints’ all-time leading goal-scorer, was trying to force things early in the game. But as time went by, the University of North Carolina commit settled in and played what Jenkins called her best game of the year.

"Once she calmed down with it," Jenkins said, "she shot beautifully and she let the game to her."

Reed finished with a team-high five goals. She said the Saints were motivated to beat Good Counsel not only because of last year’s loss, but due to a desire to perform well while surrounded by talented teams.

"At St. Stephen’s, we always have a target on our back, so we always have to prove who we are and every single game we’re trying to prove something to someone," Reed said. "Definitely, with all these people watching there’s a lot of pressure, and we’ve just got to come out strong and do what we do best."

"You definitely want to look good because a lot of girls are scouting us because we’re playing a lot of these teams throughout the season," SSSA senior Michele Phillips said. "You want to bring your best game for everyone watching."

Phillips, who will play lacrosse at Notre Dame, and junior Margaret Tucker Fogarty each scored three goals. While Reed and University of Virginia commit Besser Dyson receive most of an opponent’s attention, Phillips and Fogarty reminded onlookers that the Saints have goal-scoring depth.

"Besser and I always have a lot of pressure," Reed said. "People are sliding early, so it’s good because we can use ourselves to create opportunities for other people. Michele is great at challenging; she finished well today. It’s good to see other people putting numbers up on the scoreboard."

"Michele is just a ‘Steady Eddie;’ a leader on offense, a leader on defense. She’s like the quarterback on the whole field," Jenkins said. "… Margaret Tucker has so much speed and athletic ability."

Jenkins said the Spring Fling event used to have more of a scrimmage structure, but SSSA changed to a game format in order to attract better teams.

SSSA defeated Honeoye Falls-Lima of New York 17-5 on April 13. Saints’ rival Georgetown Visitation suffered its first loss of the season during the event, falling to Notre Dame Prep 8-7 in overtime on April 14 before bouncing back with a 13-8 win against Archbishop John Carroll of Pennsylvania.