Alexandria — In two seasons, Carly Reed rewrote the St. Stephen’s & St. Agnes girls’ lacrosse record book and helped lead the Saints to a pair of state championships. The standout attacker is committed to the University of North Carolina and was named first-team All-American by U.S. Lacrosse and second team by ESPN RISE. 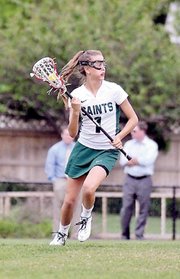 Now a junior, Reed has pretty much done it all in her high school career. She enters the 2012 season as the program’s all-time leading goal scorer with 237, and holds single-season records for points (194) and goals (153). But despite having accomplished so much so soon, Reed remains driven to succeed by a desire to prove she has earned the accolades bestowed upon her.

“I think [what motivates me is] just kind of living up to expectations and feeling better about myself, that I deserve what I’ve been given — going to UNC, everything,” Reed said. “I deserve it and [I want] to show I’m working hard for it and I earned it.”

Reed’s hard work was evident on March 19 when St. Stephen’s opened the 2012 season with a 14-3 home victory against Bishop Ireton. Reed scored six goals, including five in the first half, and could have added plenty more if the Saints hadn’t let off the accelerator with a 12-0 halftime lead.

“I think with Carly, she always wants to get better,” head coach Kathy Jenkins said. “She wants to do better than she did last year, so she’s trying to work on looking for more assists this year. We’re trying to help her develop a better dodge. Because she’s so fast, she can outrun people, but everyone’s doubling her and tripling her this year. We want her to work on a couple moves.”

“I think [what motivates me is] just kind of living up to expectations and feeling better about myself, that I deserve what I’ve been given — going to UNC, everything. I deserve it and [I want] to show I’m working hard for it and I earned it.”

Junior midfielder Besser Dyson scored three goals for the Saints. Dyson, who tallied more than 100 goals as a sophomore, is committed to the University of Virginia. She said her love of the game keeps her motivated.

“I love coming out here every day,” Dyson said. “After school, I just get ready and come out here. We come out here early at like 3 [p.m.] — practice starts at 3:30 — but we come out here and shoot around. It’s just a fun atmosphere.”

Reed and Dyson were featured in an ESPN.com article about the duo’s close-knit relationship on and off the field. Both said they enjoy the attention, but it comes with a price.

“It’s exciting,” Dyson said. “I love that kind of stuff, but it does make me [feel] like, ‘Oh, I can’t play bad because I don’t want everyone to think I’m awful.’ Everyone does have bad games, but it does put a little pressure on you to always perform well.”

Reed and Dyson are a talented duo on a loaded Saints team, which includes senior midfielder Michele Phillips, who scored 90-plus goals last season, senior attacker Katie Austin and senior goalkeeper Katie Wiseman, among others.

“This year, we felt like we have 20 returning players, which we never have, and kids that have played together,” Jenkins said. “And we added some more speed and height.”

The Saints will host Hutchinson from Tennessee at 4 p.m. on Friday, March 23.