Letter: So Much Inaccuracy from County
Votes

Letter: So Much Inaccuracy from County 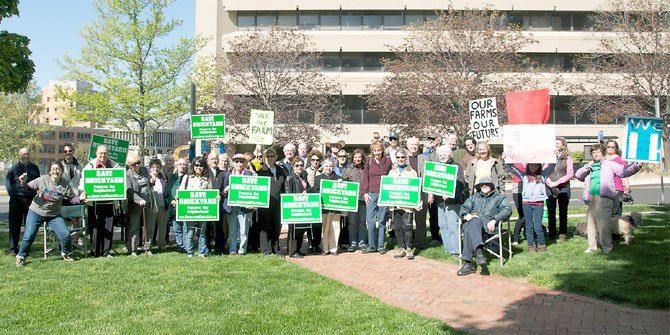 About 40 members of the Brickyard Coalition last week delivered a petition containing more than 750 signatures opposing the county decision to lease 20 acres on Brickyard Road to Montgomery Soccer Inc. for soccer fields. The site is officially a future school site and has been leased to organic farmer Nick Maravell for the last 20 years.

I went with a group of concerned citizens to file a petition today [April 13] in opposition to the County Executive’s secret agreement with Montgomery Soccer Inc. (MSI) to construct and operate soccer fields on the Brickyard School public property. When we reached Ike Leggett's office, the doors were locked and a guard was stationed at the door. We were told these doors are always locked, which is not true. We've been there before when the doors were not locked.

I am amazed at how much information given to the public is inaccurate. Perhaps the assumption is that anything can be said because most people won't know that it's inaccurate.

The public was told that neighbors were made aware of the project without clarifying that this information was only provided after the deal done, without any public input. The Maryland State Board of Education has reprimanded the Montgomery County School Board twice for failure to follow proper procedure in this process. The promised traffic study to determine if local roads, congested at rush hour, could handle the extra traffic was never done; probably because it would have indicated that Falls Road cannot handle more traffic at rush hour. MSI has stated that the Brickyard project will have amenities for residents. The fact is, MSI's fields will be fenced and locked when not in use. We've been told that there will be a farm element — which is a tiny "turf farm" for an unusable corner of the acreage, in other words, one corner will be grass. Farming it is impossible not only because it's too small, but also because farming it would cause massive drainage problems. The public has been told we are NIMBY's when we have six soccer fields in the immediate vicinity, without counting the fields at our local elementary schools, community center, and other schools in the area.

This development is not in keeping with the master plan, which home buyers consult before buying a home. One of the reasons Montgomery County is a pleasant place to live is that the Master Plan is carefully planned and followed, which keeps growth regulated. The master plan specifies that if the land is not to be used for educational purposes, it is for local use. The farm is an educational farm for farmers who want to learn about organic farming and protecting the watershed. It is also offering an educational program for children. The farm is a national treasure: Secretary of Agriculture Tom Vilsack placed Mr. Maravell on the National Board for Organic Standards. The farm fulfills the educational and farming initiatives the county supposedly espouses.

Finally, because we have been told the soccer fields are for north Potomac and Chevy Chase, it would make more sense in this age of expensive gasoline, for the fields to be in the neighborhood where they are needed so as few parents as possible have to drive long distances. Since Chevy Chase doesn't seem to have more land for fields, it makes more sense to have the fields in North Potomac which has both the need for fields and the land.