Will Maravell Go or Stay?
Votes

Will Maravell Go or Stay?

Potomac — The county told Nick Maravell that he must vacate Brickyard Road by Aug. 15 so it can move forward with plans for soccer fields. 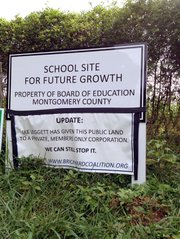 Last week, Maravell, owner of Nick’s Organic Farm, filed a motion to stay while the Montgomery County Circuit Court determines the ultimate outcome of the 20 acres on Brickyard Road.

Maravell has leased the property from the school system since 1980 to steward an organic farm. In March 2011, despite no public involvement or knowledge, the Montgomery County School Board voted to turn the land over to the county for a public-private partnership for soccer fields.

“There would be no harm to the Board, MCPS, the County or MSI if Petitioners are allowed to remain on the Property during the pendency of this action,” wrote James L. Parsons Jr., attorney for Maravell and Nick’s Organic Farm. “Neither the County nor MSI have submitted an application with [Park and Planning] related to the change of use for the subject property,” according to Parsons. “Thus, MSI does not yet have the necessary permits to begin the construction of the soccer fields.”

The Maryland Department of Agriculture certifies the farm as organic, which it has been since 1986. Maravell seeks to maintain “status-quo” while legal issues are decided by the courts.

“If a stay is not entered, petitioners will be forced to vacate the property after Aug. 15, 2012. As a result, over 30 years years of organic soil building will be lost,” according to the Circuit Court documents.

Both Maravell and the Brickyard Coalition asked for Judicial Review of last week’s State Board of Education ruling. The state board ruled that Montgomery County’s Board of Education did not violate law when voting to turn the land over to the county during a March 2011 meeting.

Maravell and the Brickyard Coalition challenge the validity of the lease to the county.

According to the court documents:

“There are serious legal questions going to the merits, including but not limited to:

“a) Whether the Board’s action was illegal because it exceeded its authority under Section 4-114 of the Maryland Education Article, because the Lease does not result in direct benefits to the Board in carrying out its educational responsibilities.

“b) Whether the Board’s actions violated its own policies and procedures as stated in the Board of Education Handbook and the Open meetings Act.”

The Almanac did not obtain the county’s Circuit Court response to Maravell’s motions by its Tuesday presstime.

But the county believes there is a critical need for soccer fields in the county and County Executive Isiah Leggett acted to meet that need.

The county also says it offered Maravell help to relocate his farm, as well as language in the Request for Proposal that included a section of the soccer site to be devoted to a farm use.

The county says MSI was the only bidder during the Request for Proposal period.

The county, through legal documents, also says it has been responsive to the Brickyard Coalition requested release of information.

On Monday, Aug. 6, Leggett announced a new program to support farmers that emphasizes the need for farmers to have long-term access to their land.

“Our region has an ever-increasing demand for sustainable, local food — food that nourishes our children, reclaims our environment and provides meaning employment within the County,” said Leggett. “The New Farmer Pilot Project will give new farmers a head start by matching them with private land owners and a support network that enables them to grow their businesses.”