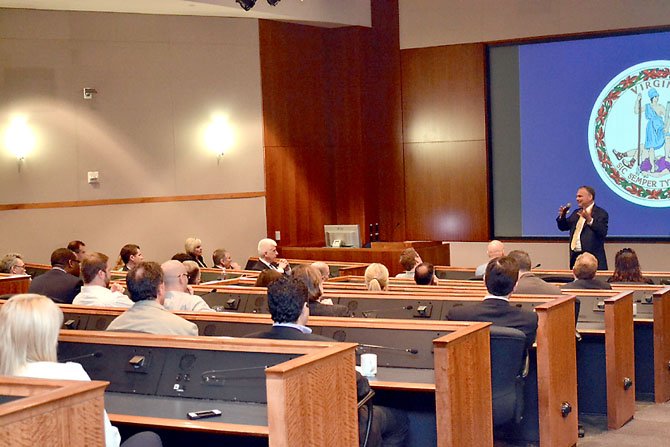 U.S. Senator Tim Kaine (D) on Monday, April 22, visited Oracle, a global technology company in Reston, to meet with leaders of the Northern Virginia technology corridor and discuss his efforts to help their businesses grow and thrive, including a comprehensive solution to the nation’s broken immigration system.

Kaine has advocated comprehensive immigration reform as an important way to attract talent to Virginia businesses that will help them compete and has voiced support for the bipartisan Border Security, Economic Opportunity, and Immigration Modernization Act that was introduced last week by a group of eight senators.

“Immigration is fundamentally a talent issue. How do we attract and train the most talented people in the world to come to Virginia and help grow our economy?” said Kaine. “I am encouraged by the bipartisan proposal laid out by a group of senators that recognizes the need for a comprehensive solution to an immigration system that hasn’t been seriously reformed in more than 25 years.”

Kaine has also cosponsored the I-Squared Act (S.169) that would expand visas for trained professionals, many of whom have the skills needed to fill high-demand openings in the technology sector. Currently, the U.S. Government allows for a limited number of workers to be sponsored for H-1B employment every year. I-Squared would raise the cap from 65,000 to 115,000 for employees with an advanced degree from a U.S. college or university. It also establishes a national STEM education fund that expands, recruits and trains more teachers in STEM fields and expands opportunities for students to study in those areas.

Kaine began his visit with a tour of the facility and learned how Oracle integrates technological communication within different agencies and localities. Kaine also hosted a town hall with more than 175 employees from Oracle and other Northern Virginia technology companies. The town hall included discussions on immigration, foreign policy and campaign finance reform, as well as how citizens can be more involved in shaping decisions made by Congress.

“On many of these issues, including the measure to reduce gun violence that we voted on last week in the Senate, we have to make sure the reasonable majority is not drowned out by a vocal minority,” said Kaine. “As citizens, it’s important that you call and write our offices to let us know your thoughts. Keep doing that as we discuss and debate these complex issues and we’ll get a better outcome.”

Oracle recently partnered with Kaine on the release of his first bill, the bipartisan Troop Talent Act (S.700). Part of the measure will help more service members trained in information technology translate their skills to the civilian workforce. Oracle is committed to supporting veterans by partnering in credentialing efforts, offering internships and training programs, and matching employee gifts to veteran service organizations. Kaine also had the opportunity to meet with Wounded Warriors who were participants in an internship program at Oracle in Reston.