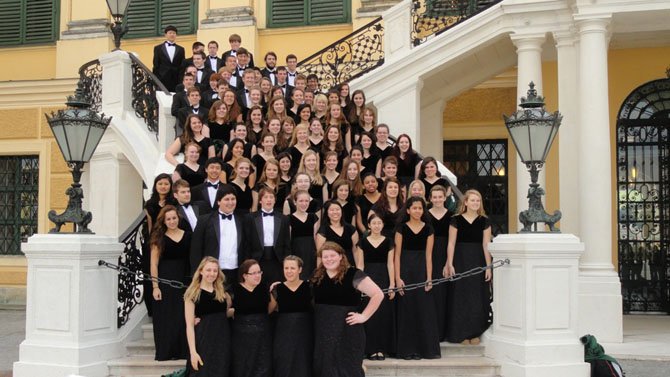 Students from the Langley Choir visit Schonbrunn Palace in Vienna during their Spring Break trip to Europe. Photo Contributed

McLean — On March 29, 113 Langley choral students and chaperones along with their director, Dr. Mac Lambert, and Langley High School administrator Sonya Williams gathered in the Langley High School auditorium with suitcases and passports in hand. At approximately 12:30 p.m., everyone and everything was loaded onto school buses for the first leg of their trip to Dulles International Airport. The Langley Concert Choir, Madrigals, Women's Chamber Choir and Women's Select Treble Choir all performed throughout the beautiful cities of Prague, Vienna and Salzburg.

The Langley High School Choir performs at the Benedictine Abbey in Melk, Austria during their Spring Break trip.

“After flying overnight on a plane for eight hours, we arrived in Munich, Germany. We then rode on a coach bus for five hours and arrived in Prague in the Czech Republic that same day,” said Sarah Salem, a member of the Women’s Select Treble Choir. “We arrived at a beautiful church and had to quickly change into our choir dresses. This was our first experience singing in one of the many churches on our trip and it was amazing being able to hear our sound reverberate throughout the church and echo against the walls and ceiling.”

Other students enjoyed seeing the sights around Prague.

“My favorite part of the day was going on the river cruise on the Vitava River,” said Women’s Select Treble Choir member Celeste Saddler. “We met people from the other choirs and we had the opportunity to see some of the beautiful sights in Prague from the boat.”

THE NEXT DAY the students participated in Young Prague 2012, an international competition.

“It began with a concert by Cancioneta Praga (a prominent Czech ensemble of young singers) who sang really fun songs from all around the world,” said Ariana Kuhnsman, a member of the Women’s Select Treble Choir and the Women’s Chamber Choir. “Langley did well at the competition. However, everyone was nervous since there were many other great choirs from all over: Puerto Rico, Denmark, the United Kingdom and many other countries.”

Andrew Jones, a member of the Madrigals, said he enjoyed seeing such a diverse group of acts.

“The cultural interaction and immersion proved to be a very eye-opening experience for me personally,” he said. “The opportunity to see a variety of musical styles across a plethora of cultural backgrounds helped me to better understand and appreciate the many forms of music in our world's varied society.”

On their final day in Prague, the group sang in the historic St. Nicholas Church before joining in a parade with the other groups in the competition.

“The parade was very fun because we would do the ‘Hail Saxons’ cheer and high-five many of the people of Prague. After the parade, we had dinner at our hotel and got ready for the awards ceremony and disco party,” said Lauren Meyer, a member of the Women’s Select Treble Choir. “The party was at the National House Vinohrady where we had performed the day before. They announced the winners of each category and Langley did extremely well, winning three gold awards and one silver award.”

Some students called that day the highlight of the trip.

“This day was my favorite because it was loads of goodness all compiled into 24 hours,” said Hannel So of the Concert Choir. “It was a very joyful and proud moment for me and I felt like a true representative of Langley High School and the USA.”

Members of the Langley Choir visit the Mirabell Gardens in Salzburg during their Spring Break trip to Europe, where they were awarded one Silver and three Gold medals in the 2012 Young Prague Festival.

ON APRIL 1, the group made their way to the Vienna - to sing at the Schlosskapelle Imperial Chapel in the Schonbrunn Palace in Vienna.

“The palace is so beautiful and, despite the cold, I think the concert sounded great. Following the concert, we quickly passed through a market on the palace grounds,” said Amy Welch of the Women’s Chamber Choir. “I enjoyed this because I was able to try my first Austrian pretzel and see the stilt-walking chicken lady. It was exciting to experience the Austrian culture in the market.”

Julia Isacson said the trip to Vienna was a breath of fresh air.

“We came from the cold, rainy weather of Prague to the shining sun and the warm weather of Vienna. When we performed in the Schonbrunn Palace, it was a life changing experience. The acoustics in the chapel were phenomenal,” she said. “The notes lingered in the air a couple of seconds and with each second, the sound was more breathtaking. I will never forget visiting the music capital of the world.”

During their next day in Vienna, the students were able to visit the graveyard where many famous composers were interred.

“As choir nerds, we were just a little overexcited to see the musical geniuses’ graves,” said Ivy Kenton of the Women’s Select Treble Choir. “We then went to the large chapel within the cemetery grounds It was breathtakingly beautiful. There was so much color with a huge dome ceiling decorated with blue tiles.”

Andrew Myers of the Concert Choir called the Benedictine Abbey in Melk the most beautiful building he has ever seen.

“We toured the different colored rooms and in each room were amazing artifacts made of gold and gems,” he said. “In the library, there were thousands of big books. The ceiling of the library had the most beautiful painting I could ever imagine.”

Jesse Levine of the Madrigals said the acoustics of the church made that performance one of their best ones.

Students from the Langley High School Choir perform in a parade through Prague as part of the 2012 Young Prague Festival, where they one a silver and three gold medals during a Spring Break trip.

“The reverb of the room made the parts sound especially uniform and I believe it was our best performance,” Levine said. “The church was also decorated beautifully and almost completely covered in gold.”

While in Vienna, the students went on a tour inspired by “The Sound of Music.”

“I loved going to the gazebo where they filmed the number ‘Sixteen Going on Seventeen.’ We also saw the real von Trapp house as well as the two houses they used for the movie,” said Jamie Joeyen-Waldorf of the Women’s Select Treble Choir. “We then toured the Salzburg Salt Mines, donning miners' smocks. The slides were very fun to go down and we traveled from Austria to Germany underground in seconds.”

After their tour of the mines, the group gave their final performance at the Parish Church of Mulin in Salzburg.

“It was great seeing that we made the people we performed for happy,” said Emily Nesbit of the Women’s Select Treble Choir. “The last thing we did on our trip was go to a Mozart dinner. The singing was beautiful and it was a great conclusion to an altogether amazing trip.”