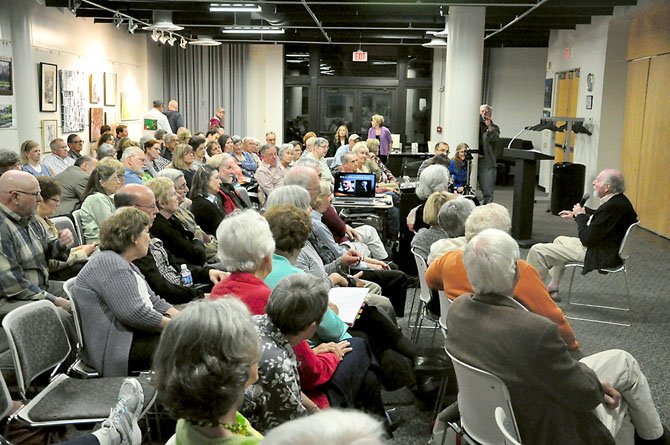 Reston — While Robert E. Simon Jr. literally started Reston’s history, his own history goes back five decades. Reston wasn’t founded until Simon was 50, and the Reston Historic Trust attempted to fill in residents on Simon’s early life during their Thursday, April 19 program at the Reston Community Center Lake Anne.

Simon celebrated his 98th birthday April 10, he was born in 1914 in New York City. He was one of four children (the only son) born to Robert E. Simon Sr. and Elsa Weil. Robert Simon Sr. was born in 1877 and started work at age 14 at a ribbon factory.

“It didn’t take long before he got in trouble,” said Loren Bruce of the Reston Historic Trust, one of the presenters. “Nobody knew Robert Sr. was color blind, so he didn’t last very long at that job.”

Robert Simon Sr. was a partner in a real estate company by the time he was 21, and Bruce said he “worshipped” Weil, due to her high level of education received at Vassar College. Education was greatly respected by the elder Robert Simon.

“My father valued education enormously, in my opinion he almost overvalued it, because he started working when he was 14,” Simon said. “My mother was very interested in music… she very often had us singing something or other, and I remember sitting on her lap while we listened to a performance of the whole “Ring Cycle” [by Richard Wagner]. She might have thought of it as a punishment, but I thought it was the greatest collection of music there was.”

In 1920 Robert Simon Sr. sold the Paramount Building on 43rd and 44th Street in New York for approximately $750,000. His father used that money to take his family to Europe for 15 months, visiting Germany, Austria, Switzerland, France, Belgium Holland and England. 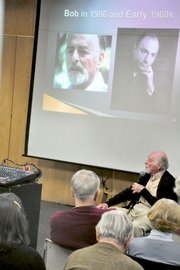 THE TRIP PROVED TO BE a memorable one for Robert Simon Jr., for good and bad reasons. On the trip, on the border of Germany and Austria, their car collided with another car, throwing Robert Simon Sr. and Jr. (who were in the front seat) through the windshield, and severely injuring his sister Betty, but all survived.

The trip also provided Simon with many architectural inspirations for Reston.

Industrialist Andrew Carnegie began construction of the hall that would bear his name in 1890. After his death in August 1919, his widow eventually sold it to Robert Simon Sr. in 1925, a move that would prove instrumental to the history of Reston.

Meanwhile, Simon attended the Horace Mann School, graduating in 1931. He then headed to Harvard to study Literature and History from 1931 to 1935.

“I specialized in the Henry VIII era of history,” Simon said. “I also played squash and tennis and did a lot of singing. I was lucky enough in my last two years to get into the group that did the morning services at Harvard Chapel… we would also try and perform at funerals, which was good for about $20.”

After graduating from Harvard, Simon’s father arranged for him to work at a local business to learn the ropes, until Simon was ready to join his father’s business. But it was not to be.

“In 1935, his father passed away, and Robert has already graduated and is finishing up a bicycle trip around England and France,” Bruce said. “His mother and three sisters greeted him at the dock, and soon he took over responsibility for the family business.”

Later Robert Simon Jr. served in the Army from 1942 to 1946, serving in the Quartermaster corps and he left the Army as a captain.

He also sold Carnegie Hall to the city of New York in 1960, for $5 million. That money would eventually go toward purchasing 6,750 acres of land outside of Washington, D.C., which would eventually become Reston.

Kristina Alcorn and Bruce presented the story of Simon’s life, taking their information from more than six hours of interview tapes with him, as well as other sources.

“The challenge with history is that it’s going back to someone’s earliest memories. If I were to line up 10 people who all witnessed the same event, chances are we’d get 10 different versions,” Bruce said. “We compared notes of our interviews and there’s not a lot of discrepancies, so we’re hoping that’s confirmation that we’re close to the real events.”

During the process, Alcorn accompanied Robert Simon Jr. and his wife to New York City. She recalled one experience that stood out, while they were passing by the apartment at 404 Riverside Drive, the apartment where the Simon family grew up.

“We walked past, and Bob pointed out the window, and we kept walking. Then we looked back and Bob was standing in front of the building, and talking to the doorman, and the next thing we know we were on our way up to the apartment,” she said. “We were on our way up and I wondered what we would encounter, and we encountered a very gracious mom and her teenagers, and she let us in, and Bob went around showing us things and making comments like ‘Oh, my mom would not have liked this pool table here.’ It was a testament to Bob and his ‘can do’ style.”

THE RESTON MUSEUM will present the early days of Reston for their May program, which will tell the story of Simon’s land purchase and the initial planning of Reston. The program will take place May 24 at the Reston Community Center Lake Anne at 7 p.m.

More information is available at www.restonmuseum.org.