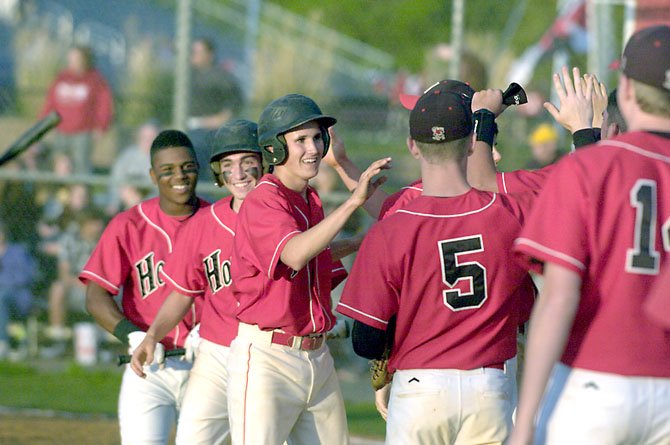 Herndon lost its Concorde District home game to Centreville last Friday, 5-4. Even so, there were good moments for the Hornets during the evening game. Photo by Craig Sterbutzel.

The Northern Region's 30 varsity high school girls' lacrosse teams will each compete in their respective first round district tournament games next Friday, May 4. The region is made up of four districts - the Liberty, Concorde, Patriot, and National Districts.

But the first round district postseason games will be extra special this spring because they will benefit breast cancer research. The Friday night of district tournament field hockey is being dubbed the first annual 'Virginia High School League (VHSL) Tournament for a Cure.'

VHSL is the governing body of high school sports in Virginia.

Each of the Friday night district first round contests will be played at different locations in support of, and for the awareness of, breast cancer research and its cure. Proceeds from the postseason games will be given to the Susan G. Komen Foundation.

More than 625 girls' lacrosse players from the region will take the field for the postseason showcase wearing the same 'pink' attire, unified in their support for the breast cancer awareness cause. All of the players will be wearing pink hair wraps, pink ribbon shoe laces, and pink ribbon pins.

The multi- site, multi- team, near simultaneous effort is the first of its kind and one in which the Northern Region Girls Lacrosse Coaches Association hopes will become an annual event.

"It is a unique and first of its kind tournament in support of breast cancer awareness, its research and cure," said Lindsey Linden, the head coach of the South Lakes High girls' lacrosse team.

Fundraising for this year's district tournaments was left to each

team. In the future, possible unified fundraising is under discussion as well as expanding the tournament by joining together with the 30 boys lacrosse teams of the Northern Region.

This week's Northern Region Top 10 Baseball Coach's Poll is as follows: Lake Braddock of the Patriot District remains at the No. 1 position, with a trio of Concorde District clubs - No. 2 Centreville, No. 3 Chantilly, and the No. 4 Herndon Hornets - following. The five through seven slots are filled by teams from the Liberty District with the McLean Highlanders at No. 5, the Madison Warhawks No. 6, and the Stone Bridge Bulldogs No. 7. The next two teams in the poll are defending Northern Region champion South County (Patriot District) at No. 8 and Oakton (Concorde District) at No. 9. Two teams, Langley High (Liberty District) and Westfield (Concorde) are tied for the No. 10

The Oakton High girls' basketball team, which went unbeaten last winter and captured the Virginia State AAA championship, will be presented with the Army National Guard National Ranking Trophy – as part of the fifth annual MaxPreps Tour of Champions for Girls Basketball - this Friday at the school's spring pep rally. Oakton,under head coach Fred Priester, is one of 10 schools across the nation earning this honor.

Herndon High Weekly Spring Sports Update: In boys' soccer, the Hornets defeated Concorde District opponent Westfield last week, 1-0, to improve their overall record to 7-1-2. This week, Herndon was scheduled to play at home on Thursday, April 26 versus district opponent Centreville. ... The Herndon girls' soccer team, going into its' district home game against Westfield last week, had a record of 3-5-1. ... In baseball, the Hornets entered the week ranked No. 3 in the Northern Region Coach's Top 10 Poll. Herndon carried an impressive 8-2 mark heading into this week's games. ... Herndon softball is currently 10-5 overall and 1-2 in district play. ... The Hornets boys' lacrosse team lost a tough district contest to Westfield early last week but still holds a solid 7-2 record. The team celebrated their Senior Night last Friday in a home game against the Robinson Rams. ... The Herndon girls' lacrosse team (3-4) won a recent game versus non-Northern Region opponent Loudoun Valley and lost to district opponent

Westfield. ... In track and field action, Herndon participated in a meet at Georgetown Prep last Saturday.

This week the undefeated McLean High boys' tennis team, under head coach Aavo Tomkov, had a challenging slate of competition versus Liberty District opponents. The Highlanders (8-0), earlier in the week on Tuesday, April 24, were scheduled to travel to cross-town and Liberty District rival Langley High (7-1). Two days later, on Thursday, April 26, the Highlanders were set to host district opponent Jefferson High (6-2) for a 3:30 p.m. competition. The match versus the Colonials will be the second meeting between McLean and Jefferson this spring. The Highlanders won a close match versus Jefferson in the first meeting. Last spring, Jefferson captured the Northern Region championship. On way to the crown, the Colonials defeated McLean in the region semifinals, 5-3. The Colonials then bested district opponent Langley in the region finals.

The Langley High girls' softball team hosted the Marshall Statesman last Friday, April 20, winning 7-6. Emily Templin pitched all seven innings for the Saxons, holding the Statesman to two runs and four hits while striking out eight and walking one over the first six innings.

A triple by Ashley Panetta in the first inning gave Langley a 1-0 lead. Marshall tied it up in the top of the fourth and Langley retaliated in its half, swinging hard, multiple hits by Taylor Chason, Kaitryn Evans, Maggie Natal, Panetta, and Templin, as well as a home run by Gabi Pijaca.

Marshall squeaked out an additional run in the top of the fifth. As Langley approached the seventh inning, it looked as if the Saxons had the game well in control, but the Statesman rallied behind six hits to get within 7-6. With the bases loaded and two outs, Templin struck out the last batter (her ninth strikeout of the game) to secure the win for the Saxons.