Building Upon Layers Of History
Votes

Building Upon Layers Of History 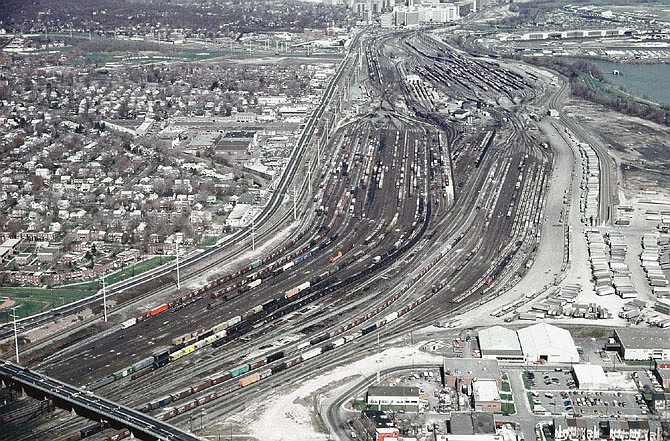 Photograph of the Potomac Yard about 1972.

Alexandria — If you stand on the roof of a high rise apartment build in North Alexandria, you can get a sense of the extraordinary flatness of the Potomac Yard. You can see the Washington Monument and the Capitol dome across a skyline unbroken by anything but the occasional lifting off of a plane from Ronald Reagan Airport. To the left are the high rise buildings of Crystal City, but they are manmade break in the flat land which runs from the Potomac River south to below Old Town before a ridge of any significant height changes the contour of the country side.

“From prehistoric times through the present, these level terraces paralleling the Potomac River provided a north/south pathway for moving people and goods,” according to an essay by Francine W. Bromberg, the preservation archeologist for the City of Alexandria.

“While the modes of transportation changed from foot to horse and stagecoach, then to canal boats and later trains and automobiles, the landform remained an important link.”

According to Bromberg, “bands of Native American hunters and gatherers may have traversed the area that became Potomac Yard as early as 13,000 years ago.” By the time John Smith made his voyage up the Potomac River in 1608, he recorded there were two Native American villages along the Potomac, one near the site of Reagan National Airport and another near Belle Haven, south of what became Alexandria.

In the late 18th century and the early years of the 1800s, the area provided acreage for farming, at first tobacco and later wheat and vegetables to feed the growing community of Alexandria and Georgetown across the river in Maryland. The French Army led by the Comte de Rochambeau crossed the Potomac by ferry from Georgetown and followed a road south through the Potomac Yard site on his way to Yorktown to fight with the Americans against the British in 1781.

Bromberg writes that competition with Georgetown in Maryland was a growing concern for Alexandrians in the early 19th century and when they learned that the Chesapeake and Ohio Canal would end at Georgetown , they became concerned that western trade would bypass their wharves.

They chartered the Alexandria Canal Company in 1830 and financed the building of a canal that crossed the Potomac on a unique aqueduct bridge built on eight masonry piers. In Virginia, canal boats were pulled along seven miles across the flat land that would become the Potomac Yard and lowered to the Potomac at Alexandria through four lift locks.

But it was the railroads that preserved this as open land from the mid-19th century through the 1980s. It is what land developers call a “brownfield” site, where no other community of any size has stood; where land is clear and ready for use. Potomac Yard became an important rail hub in the Civil War and connected to the north by a railroad bridge, allowing the Union forces to transfer freight to supply units fighting to the south.

In 1906, to relieve critical crowding as freight cars were transferred from northern rail lines to southern rail lines, six competing railroads agreed to band together to construct a rail yard. At its height the yard had 136 miles of track crammed into a 2.5 to 3 mile stretch of land with a round house repair building, icing facilities, and warehouses.

The rail yard at its height employed 1,500 workers many of whom settled in the small bungalow communities along Route 1. Known as the “Gateway Between the North and the South,” Potomac Yard was the largest freight transfer yard on the east coast and serviced more than 100 trains a day.

With its passing in 1987, went, in a sense, a cultural subset, the blue collar worker. St. Elmo, Hume, Lynhaven and to a larger extent Del Ray were settled by working class Americans, many employed on the railroads. Now those communities are gentrified and the new residences planned at the Potomac Yard are selling for $300,000 to $800,000.