Organic farmer told to vacate Brickyard Road by Aug. 15; county to take possession the next day.

Potomac — The tongue lashing began in the form of a footnote — the ninth footnote — on page 11 of the State Board of Education’s legal opinion.

The state board ruled last week against the Brickyard Coalition’s appeal — and 41 separate appeals — stating that the local Montgomery County School Board did not violate law when voting in a March 2011 meeting to turn the lease of the 20-acre Brickyard Road site to the county to operate soccer fields. Nick Maravell has operated his organic farm there under a lease from the county since 1980. 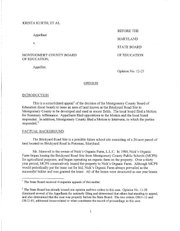 “Although the legality of the lease between the local board, Nick’s Organic Farm, and Mr. Maravell is not at issue in this case, we note that the argument set forth by those Appellants regarding the alleged violation of 4-114 seems disingenuous,” said State Board of Education President James H. DeGraffenreidt Jr. and Vice President Charlene M. Dukes and the board. “If their argument were to prevail it would mean that the lease of the Brickyard Road site between those Appellants and the local board for approximately 30 years was in violation of the law.”

Earlier this spring, Montgomery County Executive Isiah Leggett officially awarded the 20-acres of farmland on Brickyard Road, owned by the Board of Education, to Montgomery Soccer, Inc. to develop into four soccer fields.

MSI would develop the fields for use by its members under a sublease from the county.

In March 2011, neighbors and civic organizations in Potomac learned that Leggett had already decided, without public input or notice, to take control of the 20-acre school property on Brickyard Road to turn it over for development into soccer fields.

The action will displace Maravell, a nationally recognized expert in organic farming, who has spent the last 30 years growing organic and GMO-free soybean and corn seeds on the property.

“The issue here is whether the decision to lease the property held in trust is reasonable. We think it is,” said the board. “This is a short-term lease to the county for the creation and operation of ball fields to be used by community soccer groups.

“It involves property that was not being used for school purposes,” according to the state board’s opinion.

“Although the appellants argue that the lease to the county is essentially a lease to a private entity because the county will be entering into a partnership with a private entity that will construct and operate the fields, we do not believe such a use violates 4.114. Under the agreement, the local board will still hold the land in trust for the benefit of the school system, and it is preserved for school use if such a need arises.”

THE BRICKYARD COALITION had a voice of its own.

“I find the opinion lacking in any reasoned legal analysis. It smacks of a political decision and begs to be appealed,” said Curt Uhre, an appellant in the case and a leader of the coalition, in response to last week’s state board of education opinion.

The Brickyard Coalition filed an appeal to the Circuit Court for Montgomery County on Tuesday, July 31, a week after the state board issued its ruling.

Uhre and Coalition President Keith Williams said The Brickyard Coalition was required to first file an administrative appeal with the State Board of Education, a board they called a political entity with political agendas.

“The sole purpose for the two-plus years of secret planning by the County Executive and the Montgomery County Board of Education was to make sure those county citizens … who live in these communities had no input into these secret decisions,” said Williams. “Neighborhoods impacted by the Board of Education and county government decisions look forward to an objective court considering the facts and applying the law in the light of day pursuant to a process that is fair, complete and open.

MARAVELL WAS TOLD this week that he will be required to vacate the property by Aug. 15, and that the county will take control and possession of the land on Aug. 16.

“Then, we’ll be on the land and we’ll see. We have no plans to dig anything up, but our work that’s already started with MSI continues.”

The county plans to move forward with the necessary process of creating soccer fields, he said.

The nine-year lease of the land from the county to MSI begins on Aug. 16, 2012 and expires in April 2021, according to county documents. The county leased the land, technically a future school site, from the Board of Education on April 19, 2011, for use as soccer fields, parking lots and other amenities.

That will include traffic studies as well as various plans to be presented to the Montgomery County Planning Board under mandatory referral.

People counting cars on MacArthur Boulevard were stationed at Brickyard and at the end of the Clara Barton Parkway Saturday.

A FREEDOM OF INFORMATION challenge in Montgomery County Circuit Court was filed by the coalition last November. The coalition claims that the county violated the public’s right to have access to information about the government’s affairs concerning the conversion of Brickyard Road farm site into soccer fields.

The next hearing on that matter is scheduled for mid-August as well.

“We seek to compel the production of records willfully and wrongfully withheld,” according to Montgomery County Circuit Court documents filed by Brian Barkley, attorney for the Brickyard Coalition.

“The Court should find that good faith efforts have not been made,” he wrote.

In its ruling last week, The state Board of Education acknowledged that a Open Meetings Compliance Board found that the Montgomery County School Board violated the Open Meetings Act at the March 8, 2011 meeting by “citing wrong statutory reference for closure in its closing resolution, by discussing matters outside the scope of the exception it claimed, by failing to prepare meaningful minutes of its closed session, and by failing to include meaningful information about the session in the minutes of its subsequent open meeting.

“The Compliance Board noted, however, that there may have been a valid reason for the closure, which the local board claimed after the fact was to confer with legal counsel,” according to the opinion.

The state board ruling covered much ground, including a debate on jurisdiction of the state board, due process, three attorney general opinions, Maryland Open Meetings Act Claims, and holding land in trust for the benefit of the school system.

The state board also addressed the coalition’s claim that the local board violated Maryland Annotated Code by failing to submit the proposed decision to change the use of the Brickyard Road site to the Planning Board “via a mandatory referral process prior to passing the resolution to lease the property to the county.”

The chairman for the Montgomery County Department of General Services, it said, addressed the issued before the local school board voted on March 8, 2011. “He acknowledged that it was the county who would have to go through the Park and Planning Board approval process after the development of a plan for the property,” according to the state board’s ruling. “Such land matters are better left to the governmental entities that administer the rules and regulations applicable to such decisions. In this case, we have jurisdiction over only those issues that are ‘based on alleged violations of State education law or regulations.”

But documents uncovered in the Freedom of Information request show dissension between planners and county officials concerning use of the land.

“We were therefore taken aback to read that you wrote, ‘They’re OK with it,’ and 12 months later testified that [Park and Planning] staff did not raise any concerns at that time.”

THE MEANING of the Potomac Master Plan, a blue-print for land use that was worked on for years, is also being debated and fought over.

County officials claim that the County Executive’s work to create soccer fields was a genuine effort to create a community benefit and to fulfill a critical need and shortage of soccer fields in the county, as well as something the Potomac Master Plan itself supports.

“People of good will can disagree, but in our view it is wholly keeping with the Potomac Master Plan,” said Lacefield.

“The Master Plan was crafted in painstaking detail with residents of Potomac,” he said.

“Surplus and future school sites offer potential for fulfilling some of the recreation needs of the Potomac Subregion,” according to the Master Plan on page 134.

“The Brickyard Junior High School, Kendall Elementary School and Churchill Elementary School could be developed as local parks with ballfields or other recreational uses. (Recreational uses should be evaluated along with other public uses identified elsewhere in this Plan to determine priority use for each available site.) Any site acquired for parkland should be evaluated to determine whether it is appropriate for recreational opportunities (e.g., trails, ballfields, etc.).”

The Master Plan continues on page 143, under the section that specifically addresses school sites:

“If the Board of Education determines that existing sites are not needed for schools, those sites provide opportunities to serve other public purposes identified in this Plan. Surplus school sites should be evaluated for their potential to serve unmet recreational needs, environmental objectives, affordable housing goals, or other public purposes required vacant land. In particular, Brickyard Junior High School, Kendall Elementary School, and Churchill Elementary School should be evaluated for public purposes if they are ever declared surplus.”