A cross-section of the turf field planned for Nike Field #4, which will also aid in storm water management. 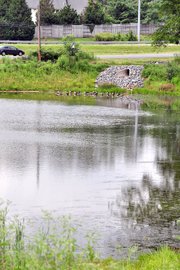 The stormwater pond near Nike Park in Great Falls. Fairfax County is planning additional stormwater improvements in conjunction with the installation of an artificial turf field.

"While the turf will benefit the members of the local athletic organizations, I think the stormwater management project will benefit everyone," said Harriet Dawson of Great Falls, who lives up Utterback Store Road. "Hopefully this will give us a blueprint about how we might be able to solve flooding issues all over the community."

A grassy swale, which will be installed next to Nike Field #4, will help with storm water drainage in the area.

A grassy swale, which is a v-shaped slope that will run along the western sideline, which will treat .4 acres of storm water, as well as remove nitrogen and phosphorus.

"This is the only project that I’m aware of, public or private, that is aiming to hold a 100-year storm," said Craig Carinci, the county’s director of the Stormwater Planning Division. "We’re working with the park authority to put in some additional bio-retention facilities near some of the ball fields."

Bio-retention ponds contain grasses, shrubs and other plants that will help show the flow of water, as well as clean compounds like phosphorous from the runoff. County staff estimate that the field itself could remove up to 1.2 pounds of phosphorous per year.

THE GREAT FALLS Glen neighborhood, located adjacent to Nike Fields, has had flooding problems for years, and Carinci said the improvements might not necessarily help them.

"Everything on the fields that are off the big parking lot are actually draining into the large retention pond, not into the nearby community," Carinci said. "But that’s about one-third, about two thirds go through the nearby subdivision, and there’s not much we can do about that, unless community members want to do stuff on their individual lots."

There is a drainpipe that runs through the neighborhood that has been the cause of some issues.

"When we had that storm last October, the pipe was full of debris and was not functioning as it should have," Carinci said.

Bill Schell of the Stormwater and Maintenance Division, said the neighborhood was built on the stream valley, and that its design makes it more difficult to prevent flooding.