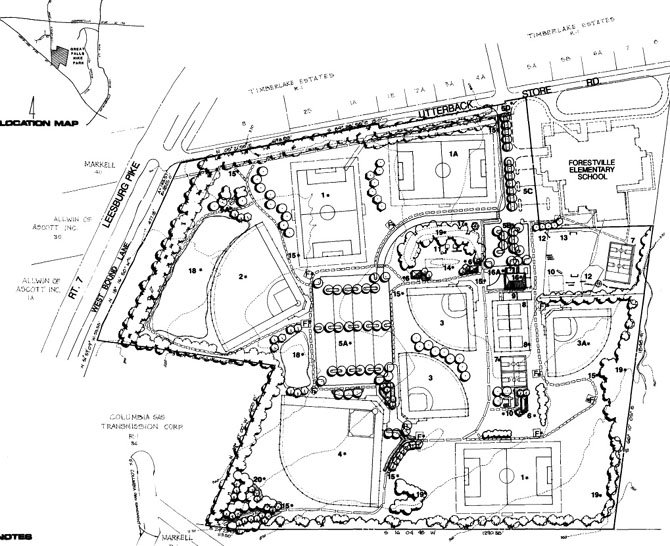 Field number four at Nike Park, located at the bottom, is scheduled to be turned into an artificial turf field, as well as receive several storm water management improvements.

Great Falls — Nike Field number four is set to become the first artificial turf field in Great Falls, through a joint effort between the Fairfax County Park Authority, the Great Falls Lacrosse Association and the Fairfax County Department of Neighborhood and Community Services. In addition to allowing more playing time for local athletic groups, the project will also serve as part of the ongoing storm water management in the area.

The Fairfax County Park Authority did a needs assessment in 2004, which found that there were 94 fields short of meeting the needs of the community. Rectangular fields, like Nike Field 4, are in especially high demand.

"This project is estimated to increase playing capacity by 62 percent, in conjunction with the addition of lights, when compared to natural turf," said Deb Garris of the county’s Athletic Field Management branch. "By increasing capacity on a lighted existing field, we’re reducing the need to construct additional fields."

THE FIELD consists of the turf as a top layer, followed by a layer of finish stone, a layer of open graded aggregate base and an underground piping system.

Garris said the industry standard for artificial turf fields is about eight to 10 years.

"Replacement means rolling up the carpet on the field, re-laying the surface below and then laying new carpet over it," she said.

The proposed field will also be used by the county’s Department of Public Works and Environmental Services to help manage the storm water in the area.

"By partnering up with DPWES, we’re putting in an additional two inches of stone and six inches of aggregate base, but should provide additional volume reduction of water draining," Garris said. "Our goal for the field is to be able to retain the volume of a 100 year storm, and the design reduces the runoff rate for two-year and 10-year storm runoff to less than the predevelopment conditions."

Craig Carinci, director of storm water planning for DPWES, says the project will tie into their overall efforts to manage storm water in the area.

"We’ll also be using additional filtration methods so the water that is running off the site is cleaner water," he said. "I’m not aware of any other project, public or private, in the county that’s ever tried to retain a 100-year storm, it’s unheard of."

According to DPWES, synthetic turf field systems reduce phosphorus runoff by an estimated 15 percent for the Nike Field project.

THE WATER from Nike Field is part of Piney Branch, which has a total draining area of about 36 acres. Emma Gutzler, an ecologist with the Stormwater Planning division of DPWES, estimated that the current project will focus on 3.5 acres of the drainage area.

Leo Santaballa Field, located behind the Great Falls Library which is currently used by lacrosse players, was originally supposed to be turfed.

"We were looking at Santaballa for a long time, but it was never the right place," said Supervisor John Foust (D-Dranesville). "It’s the current home of the lacrosse players, so that’s where we looked first, but the challenges we had there never got resolved."