One-penny hike on property tax could raise $35 million for projects throughout the county. 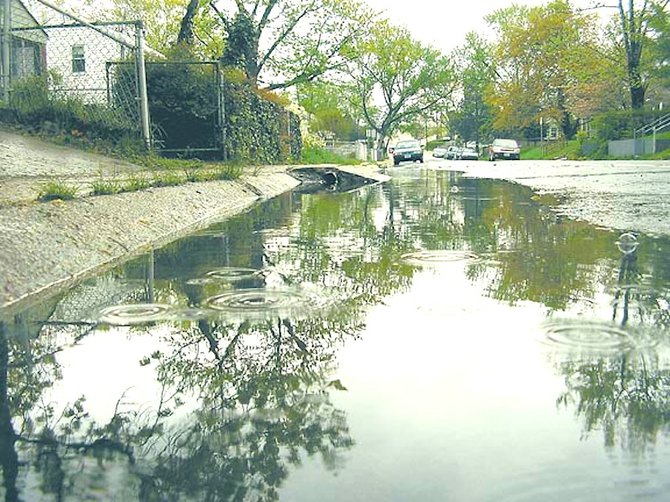 The stormwater tax was created in 2009, when supervisors approved a new service district to support a stormwater management program. Photo by Michael Lee Pope.

When it rains, it pours. That’s why Fairfax County taxpayers may have to fork over more money this year for stormwater management. County Executive Tony Griffin has proposed an increase of one penny on the real-estate tax for a total of 2.5 cents for every $100 of assessed value. The average homeowner would see a $45 increase over the course of a year. The new rate would generate about $35 million, which would be used to meet the flood of new federal and state requirements on storm sewer system.

“Everything on that list is necessary for us to do,” said Mount Vernon District Supervisor Gerry Hyland. “And it’s, if you’ll pardon the play on words, a drop in the bucket.”

“It was also,” Bulova noted, “a unanimous vote at the time when we adopted it.”

“At the time it seemed like a good idea,” added Mason District Supervisor Peggy Gross. “It was a good idea.”

THE STORMWATER TAX was created in 2009, when supervisors approved a new service district to support a stormwater management program. Before that, supervisors had already been dedicating a penny of the tax rate to stormwater projects for four years. The new tax district essentially formalized an existing dedicated source of revenue, which several supervisors say is a responsible way to handle the problems.

Large parts of Fairfax County developed from the 1950s through the 1970s, long before stormwater controls were established. The county has more than 1,500 miles of underground pipes, including about 250 miles that are more than 40 years old. Until the dedicated penny was established in 2005, the county had done little to invest or maintain the stormwater system. County officials warn that many of these pipes are reaching the end of their useful service life. Some are in failure.

“These are things we are going to have to do because of federal requirements and state requirements on water issues,” said Griffin. “We are using the real-estate tax to assess and collect money for the stormwater program. But it is a separate and distinct program.”