Field is joint effort between county and community. 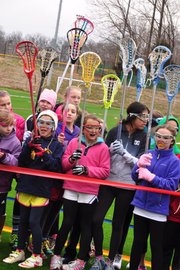 The artificial turf field at Great Falls Nike Park was officially opened Saturday, March 3, giving local athletes a new playing surface. The $1.4 million field with lighting is the result of a joint venture between the Fairfax County Park Authority, Board of Supervisors, Department of Neighborhood and Community Services and Athletics Council.

“The conversion of this turf field is a major event, and this will change the level of competition, the amount of practice time and time spent playing,” said Kevin Fay, the Dranesville representative on the park authority board. “When I became the park board member for Dranesville 10 years ago, we had one turf field in the district. Today we have at least 11 with three to five more on the way.”

Deb Garris, manager of the county’s Synthetic Turf Fields branch, estimated that the artificial turf would increase playing capacity by 62 percent by not losing time to muddy, dangerous conditions and the lighting would also increase playing time, which reduces the need to build additional fields when land to do so is scarce.

“This is the 32nd artificial turf field in the county, and probably the greatest satisfaction I’ve had, just knowing all the people who put a lot of work behind this on a very compressed schedule,” she said.

IN 2004, the county performed a needs assessment for athletic fields, and found that the county was 94 fields short of community demand. Rectangular fields are in especially high demand.

“There was tremendous involvement by the Great Falls community and the park’s neighbors, who obviously had opinions about this, and were very cooperative throughout the process,” said Supervisor John Foust (D-Dranesville). “With that many players, we could have had chaos, but we came together to seek realistic solutions to benefit the young players who enjoy this field and the neighbors seeking safety when it comes to flooding in inclement weather.”

“This field helps the drainage, not only for the local community by reducing flooding, it reduces the storm water velocity which helps the Potomac River and helps reduce nitrogen and phosphorus pollution which creates dead zones in the Chesapeake Bay,” he said.

“We’ve had the opportunity to play on this field for a few months, and the biggest thing I’ve heard back from players and parents when they see it for the first time is ‘wow, that’s a beautiful field,’” said Glenn Tofil, commissioner of Great Falls Lacrosse. “When you see this field at night it’s absolutely spectacular.”

Even in the cold, wintry conditions Saturday, March 2, dozens of young male and female lacrosse players were on the field.

“It’s hard to even call what was here before a field, more like an open grassy area with a few goals placed at the ends,” said James Stone, whose son plays lacrosse in Great Falls. “Now it looks like a state-of-the-art athletic structure, and according to everyone I’ve talked to it’s a world of difference, they really love playing on it.” 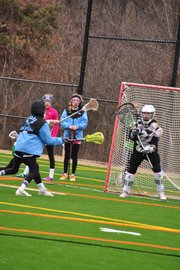 THE ARTIFICIAL TURF FIELD was originally slated for Leo Santaballa Field, located behind the Great Falls Library. After community members raised concerns, it was moved to Great Falls Nike Park.