He’s Legionnaire of the Year
Votes

He’s Legionnaire of the Year 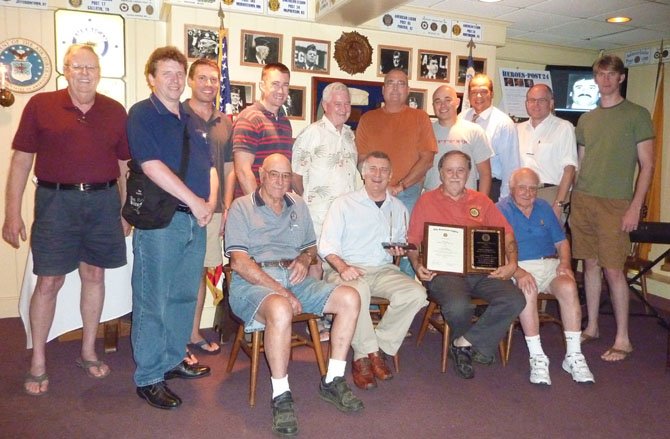 Alexandria — Jim Glassman walked into Alexandria's American Legion Post 24 on July 25 expecting the Executive Committee meeting he was attending to be routine. But his fellow officers and board members knew otherwise. 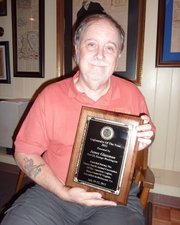 “I was completely taken aback,” said Glassman as he was presented with the 2012 Virginia Legionnaire of the Year Award, a first in the history of the historic Old Town post. “I'm not a 'rah, rah' guy. I prefer just to stay in the background and do my job.”

A Vietnam veteran, Glassman joined the American Legion more than 39 years ago. He serves as the Adjutant for Post 24 and is the District 17 Administrator for American Legion Baseball throughout northern Virginia.

“I did not join the American Legion 39 years ago for recognition,” Glassman said. “I joined because I believe in the principles that the Legion stands for.”

“I can think of no one who deserves this award more than Jim Glassman,” Aramony said. “He has truly earned this award not only for what he has done in the past, but for what I know he will do for The American Legion in the future.”

In addition to his 15-year tenure as Post 24's baseball coach, Glassman serves as the Communications Officer and the VA and Rehabilitation Service Officer, assisting members with Department of Veterans Affairs claims. Additionally, he pays monthly visits to Post 24 members living in assisted living facilities. 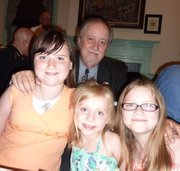 Virginia's Legionnaire of the Year Jim Glassman enjoys an event at Post 24 in Alexandria with granddaughters Lily Moody, 11, Evelyn Moody, 5, and Ella Moody, 8.

“Jim is the first one to volunteer his time and services to help our veterans,” Aramony said. “But he is also the last person to ever talk about it.”

Glassman is a regular Saturday morning fixture at the Old Town Farmer's Market, manning the Post 24 table and sharing information on the many Legion programs that are supported in the community.

The American Legion is an organization of veterans from across the country, divided up into chapters by state and post by county and city. To join, members must be a veteran of a wartime era.

In the Alexandria-based Post 24, several members served in World War II, including Col. Bill McNamara, the publisher of Stars and Stripes that led a six-man detachment across Omaha Beach on D-Day 1944, and Col. Kim Ching, who as a teen survived the bombing of Pearl Harbor and went on to serve in World War II, Korea and Vietnam.

“We've got a fantastic history with our members,” Glassman said. “They are true heroes.”

The American Legion focuses on serving veterans, whether they are members or not. Legionnaires volunteer to take other vets to the doctor, make hospital visits and attend funerals. Community involvement spans from collaboration with schools to American Legion Baseball.

“We're trying to make a difference in the world,” said Post 24 Commander Bill Aramony. “A lot of people don't understand what we do. We're here to help and serve the veterans of our community.”