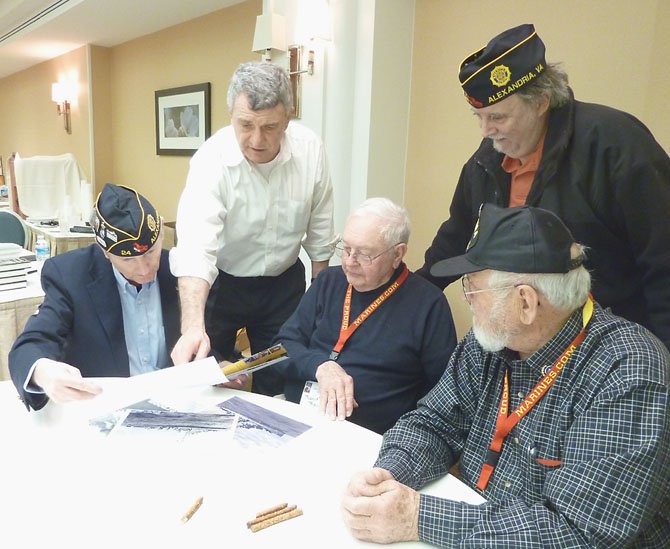 Alexandria — Representatives of American Legion Post 24 in Alexandria visited with World War II veterans in Arlington Feb. 15 during a reunion of survivors of the Battle of Iwo Jima.

“Receptions for WWII veterans seem to have gone off the radar scope in recent years,” said Henry Dorton, whose father served in the Army Air Force in the South Pacific. “With the opportunity to meet these great Americans becoming increasingly rare, visiting with these Iwo Jima survivors was my way of honoring those still living as well as paying tribute to those, like my father, who are not.”

“People forget that Iwo Jima survivors suffered horribly, not just from combat wounds, but from disease and malnutrition.”

“It was an honor to meet these Iwo Jima veterans,” Aramony said. “These members of the Greatest Generation humanized a historic event for us.”

It was on Feb. 19, 1945 that the 35-day Battle of Iwo Jima began, with the notable flag raising atop Mount Suribachi taking place a few days later on Feb. 23.

“I didn't expect to hear first-hand accounts of the two flag-raisings that took place on Iwo Jima,” Dorton said. “I'd seen the images in movies and books but it's different when you hear something of such historical significance from the personal viewpoint of someone who was there.”

The three men spoke at length with brothers Ira and Bob Rigger, who recounted how by chance they were reunited off the coast of Iwo Jima, and Ivan Hammond, who was friends with some of the original flag raisers.

“I was a little surprised at how open these men were about their ordeals,” noted Dorton. “People forget that Iwo Jima survivors suffered horribly, not just from combat wounds, but from disease and malnutrition. Ivan Hammond, like so many others, suffered an incredible loss of weight that wasn't recovered until well after the war.”

Alexandria's Post 24 plans to continue supporting the Iwo Jima veterans for as long as the reunions are held.

“We've all heard the stories about the fighting and hardships our men endured on Iwo Jima,” Glassman said. “But to hear them firsthand from heroes who actually were there and participated in the battle was incredible. It was really an honor to sit down and talk with these brave Americans and to personally shake their hands and say 'thank you for your service to your country.'”