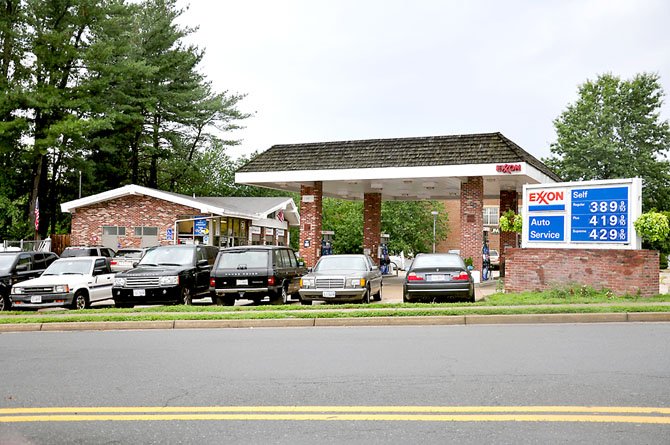 The Exxon station at the intersection of Georgetown Pike and Walker Road will have its fuel tanks removed Sept. 1 and will close by February, leaving the adjacent Shell station as the only gas station in Great Falls. Photo by Alex McVeigh.

Great Falls — The Exxon station at the corner of Walker Road and Georgetown Pike will cease pumping gas Sept. 1, and will cease all operations by March of next year. Starting Sept. 1, the underground fuel tanks will be removed, which will cease pumping gas. The current service operator will maintain services until February 2013, then they will move to the Shell service station across the street.

With the site being completely closed by March of next year, there are still further environmental studies to be done on the effect of the petroleum products used at the Exxon station.

Mike Pisarik, regional engineer for Giles Engineering, who spoke at an Aug. 13 public meeting in Great Falls after reviewing the environmental quality of the site, said that according to groundwater tests in 2008 and 2009, the site’s soil and groundwater is experiencing effects from petroleum, such as the presence of benzene, xylene, toluene and general petroleum hydrocarbons.

THE STATION took abatement measures in recent years and a corrective action plan is being prepared by the Virginia Department of Environmental Quality.

"I can’t tell you exactly what they’re going to be doing, but my discussions with the DEQ case manager indicated that they’re looking at putting groundwater wells to pump groundwater out, and to remediate that most likely through a series of carbon canisters to pull out the contaminants and discharge the water," he said.

Pisarik said TD Bank, if approved, could build their bank during the process, which he said he has seen on multiple sites.

"It’s not a detriment to building a new facility, but what needs to be done ahead of time is all the coordination to get the system in," he said.

Glen Sjoblom, another longtime Great Falls resident, said he was concerned about the vacant property existing at such an important corner.

"If the tanks are out Sept. 1 and it’s closed by February, we could be looking at 18 months before the bank moves in, depending on the environmental factors," he said. "We could be looking at a chain link fence and empty building for a long time at a premium location for this community."

Currently TD Bank is preparing an application to develop a branch on the property. The property is currently zoned for neighborhood commercial use, which has a list of by right uses that could be built on it. TD Bank will request a special exception, a drive through for the bank.

Laurie Murphy, a land use attorney also spoke at the Aug. 13 meeting. She says there could be other issues that arise.

"I can foresee a few different issues such as transportation, signage, architecture, site design," she said. "But we will be addressing those in due time."

TD Bank’s application for a special exception has not been filed with the county yet, though Murphy says it will probably be in late summer to early fall.

"This will be a custom build location," she said. "We’re going to have a meeting just on architecture, because we know that’s important. It will not be a Wisconsin Avenue location right in this community. It won’t be a prototype, it will be custom built for this location."

SEVERAL RESIDENTS questioned why Great Falls needs a seventh bank branch since Bank of America, Wells Fargo, Washington First, Capital One, BB&T and Suntrust all have branches at the Great Falls commercial center.

"We’ve done market surveys about what happens here, and even though there’s a big cluster, it’s a broad area to serve," said Terry Kenny, TD’s market president for the Washington area.

Some residents didn’t see the need for an additional bank, particularly at the cost of one of the community’s two gas stations.

"About forty years ago, the first bank opened in Great Falls, and we had a third gas station open," said Ralph Apton, a longtime resident. "Now we’re down to one gas station and you’re talking about a seventh bank. The bottom line is, we don’t want to lose that gas station."