What is in store for downtown McLean? 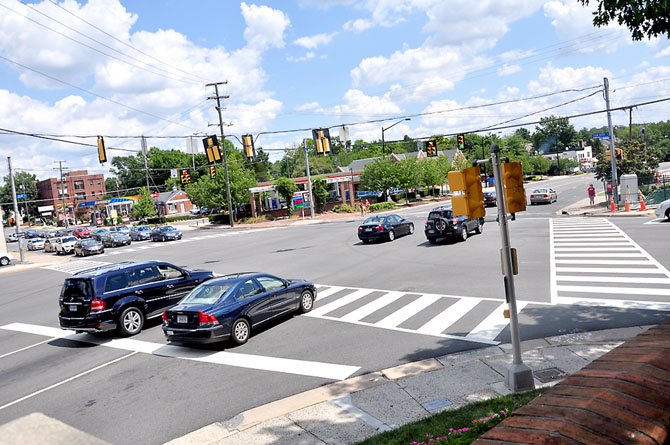 The intersection of Chain Bridge Road and Old Dominion Drive in downtown McLean, where a utility undergrounding project is taking place. Photo by Alex McVeigh.

McLean — While Tysons Corner is where most of the attention, construction and business headquarters are located, McLean’s actual downtown is a much more traditional downtown area. Home to local businesses and nationally acclaimed restaurants, McLean’s downtown is also undergoing some improvements of its own.

The McLean Revitalization Corporation, a nonprofit formed in 1998, aims to encourage downtown improvements in the McLean Commercial Revitalization District, a 230-acre parcel centered at the intersection of Old Dominion Drive and Chain Bridge Road. 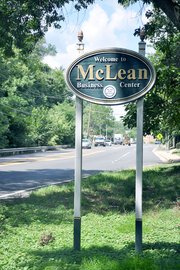 A welcome sign and median improvements in downtown McLean, which were part of the improvements planned by the McLean Revitalization Corporation.

The county’s revitalization efforts include a Main Street Project, which would turn the parking lot parallel to Redmond Street, which serves shops such as Greenberry’s and the Old Book Company of McLean, into a mixed-use block with shopping, residential buildings and restaurants.

"The Main Street Project aims to make a pedestrian-friendly, mixed-use area, and we’ve got some good pieces in place already," said Supervisor John Foust (D-Dranesville). "We’ve talked about it a lot, but currently it isn’t something the landowners are ready to go forward with, but it is a big part of what we envision for the future of McLean and the county is ready, willing and able to move forward."

IN THE PAST FEW YEARS, the McLean Revitalization Corporation has completed two phases of their streetscape project, which includes crosswalks, sidewalks and landscaping along Chain Bridge Road from Westmoreland Street to Cedar Avenue. The project’s second phase also included a raised median designed to calm traffic and increase pedestrian safety.

The next phase, currently in a grant proposal stage, calls for brick pavers, updated lighting and landscaping from between Laughlin Avenue and Corner Lane.

In June, the latest downtown revitalization project broke ground, a project that will underground the utility lines that are over the intersection of Old Dominion Drive and Chain Bridge Road. The electric and communications lines from the Shell station west of the intersection on Old Dominion Drive to the Starbucks near the Southwest corner on Chain Bridge Road up to McLean Cleaners.

Supervisor John Foust (D-Dranesville) says with the project underway, the county has already received land use applications for the surrounding area.

"We’ve got two land use applications currently in for residential units, apartment buildings," he said. "We’ve also got several of the pedestrian crossing and sidewalk improvement projects funded, and the median projects that have already been completed have definitely made the entrance to McLean more attractive."

"To be honest, until I saw the renderings online of what this intersection is supposed to look like when the lines are gone, I didn’t notice, but now I can’t help it," said Cameron Rayon of McLean. "I think in terms of overall feel, the lines underground will make this intersection look a little classier. There are some nice buildings here, with the PNC Bank and the nice looking 7-11. Getting some of the clutter, the lines, out will clean the sites up."

OTHER DOWNTOWN IMPROVEMENTS will be in the pedestrian access, with several projects lined up that will involve installation of crosswalks and other crossings.

The installation of a new storage facility on north Chain Bridge Road (a few blocks from Dolley Madison Boulevard) was another recent step toward revitalization, as the project includes under-grounding the utilities in front of that building, as well as a landscaped pedestrian walkway across Chain Bridge Road and new sidewalks.

Benny Goji, who lives in the large apartment building on Beverly Road, said while he appreciates the new walkway, he believes walkability in downtown McLean could use much more improvement.

"The new crosswalk will help when I want to get to the Safeway, but what about walking more to the center of town, to the Giant and the Starbucks?" he said. "I know there’s traffic, but we’re not Tysons Corner, a few more crosswalks and pedestrian signals would do it."