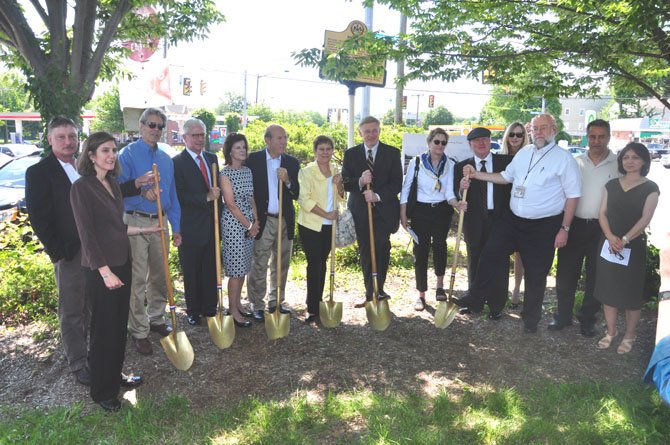 McLean — Local county and business officials gathered at the peninsula at the intersection of Elm Street, Old Dominion Drive and Chain Bridge Road Thursday, June 7 to break ground on an underground utility project that is a major step in the revitalization of downtown McLean. The project will place underground all electric and communications lines from the Shell station at the intersection west on Old Dominion Drive and from the Starbucks to the McLean Cleaners along Chain Bridge Road.

"This is the hub of downtown McLean, and you can’t help but notice how unattractive all these overhead lines are, but thankfully they won’t be here much longer," said Supervisor John Foust (D-Dranesville). "This intersection will also see the current traffic lights on wires replaced by the mast lights which VDOT uses, so we’ll be getting rid of those wires as well."

Fairfax County voters approved a Community Revitalization Bond in 1988, but it was put on hold while various streetscape improvements were done by the county in conjunction with the McLean Revitalization Corporation, such as landscaping and sidewalks along Chain Bridge Road. The McLean Revitalization Corporation is a 501(c)3 consisting of four representatives each from the Greater McLean Chamber of Commerce, McLean Citizens Association, commercial landowners and surrounding homeowners associations.

BY THE TIME Foust took office in 2008, none of the easements were obtained, so his Chief of Staff Jane Edmondson and presidents of the McLean Revitalization Corporation Dan DuVal and Bill Sudow worked with the county Department of Transportation to get them. In the end, 12 landowners agreed to 43 easements, which were done between the owners, the county, Dominion Power, Cox Cable and Verizon.

"It would have been nice if we could wave a magic wand and make it happen, but in reality there were a lot of very complex engineering issues," Foust said. "Bill, Dan and Jane put in countless hours over the last few years getting this done, and it just wouldn’t have been fiscally possible without the agreement of the landowners."

Elizabeth Morton, president of the McLean Revitalization Corporation, said this was the latest step in making downtown McLean into a true destination.

"The face of McLean is starting to change, because we know that people care about it, that it’s not just a place we drive through," she said. "This came about due to a special kind of public-private partnership, and we’ve seen that revitalization is a complex task, it can’t be done by the county alone."

THE PROJECT will tie in with existing undergrounding of utilities along Lowell Avenue and Emerson Avenue. Work will begin this month and is expected to take approximately six to nine months.

Foust also said his office is currently reviewing a project proposed by a local bicyclist advocacy group that would use signs to identify the safest routes through downtown McLean, which would likely include the project area.

After completion, brick and concrete sidewalks will be installed in the project area, funded by a federal Transportation Enhancement Grant awarded to the McLean Revitalization Corporation.