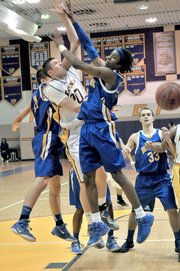 The Rams qualified for the 2011 playoffs despite a 1-5 start and a 4-6 regular season record. They lost to top-seed Westfield in the first round. Taylor enters his second season with Robinson after coming over from Woodson to replace long-time head coach Mark Bendorf.

*Famous Graduates: Rob Muzzio (1982 graduate) won back-to-back NCAA decathlon titles at George Mason University in 1984-85. He finished fifth in the decathlon for the United States at the 1992 Olympic Games. He is now an assistant coach for the Robinson track and field team. Chris Warren (1985) played running back at Division III Ferrum College before being drafted by the Seattle Seahawks in the fourth round of the 1990 NFL Draft. He played 11 seasons in the NFL with the Seahawks, Dallas Cowboys and Philadelphia Eagles, finishing with 7,696 yards, 52 touchdowns and four 1,000-yard seasons on the ground, and more than 12,000 all-purpose yards. He was a three-time Pro Bowl selection. Shawn Camp (1994) is a relief pitcher for the Chicago Cubs. Javier Lopez (1995) is a relief pitcher for the San Francisco Giants.

*Quotable: "His first two years he had a losing record. His father took him all over the country. He traveled and trained six to seven days a week for the last two-and-a-half years and it paid off. He made good decisions socially; he did all the right things that you ask of a kid. He is the poster child for what hard work can do because he has put in more work than any kid you will ever see in the state." —Robinson wrestling coach Bryan Hazard about 2012 138-pound state champion Santiago Valdez.

Thomas Rogers and the Lake Braddock baseball team won a state championship in 2012.

Coming off back-to-back Northern Region titles, the Bruins finished the 2011 regular season with a 6-4 record, qualifying for the postseason while sharing the Patriot District title with South County and West Potomac. Lake Braddock defeated Oakton in the regional quarterfinals before falling to eventual state runner-up Centreville in the semifinals.

*Famous Graduates: Mia Hamm (1989 graduate) is considered one of the greatest women’s soccer players of all time. She led the University of North Carolina to four national championships. She won Olympic gold medals with Team U.S.A. in 1996 and 2004, won World Cup titles in 1991 and 1999, and was named FIFA World Player of the Year in 2001 and 2002. Hubert Davis (1988) played basketball at the University of North Carolina and was selected by the New York Knicks in the first round of the 1992 NBA Draft. The 6-foot-5 guard also played for the Toronto Raptors, Dallas Mavericks, Washington Wizards, Detroit Pistons and New Jersey Nets during his 12-year career. He led the NBA in three-point shooting during the 1999-2000 season, shooting 49.1 percent as a member of the Mavericks.

*Quotable: "He was on today. In his past two or three starts, including this one—I’ve been playing with him since Little League—that’s the best I’ve ever seen him pit—Lake Braddock catcher Garett Driscoll about pitcher Thomas Rogers, who threw a four-hit shutout in the state championship game.

The Spartans won their first two games and started 4-2, but closed the 2011 season with four straight losses to finish 4-6.

*Historic Achievements: The baseball program has won three state championships, the last coming in 2010. The girls’ basketball program won the district championship and reached the state playoffs each of the last three seasons.

*Famous Graduates: Bryn Renner (2009 graduate) was a highly-touted prep quarterback who is now the starting signal caller for the University of North Carolina. Kara Lawson (1999) was a star guard on the Spartans girls’ basketball team before playing for the University of Tennessee and the WNBA’s Sacramento Monarchs and Connecticut Sun. Lawson was a first-round selection (No. 5) of the Detroit Shock in 2003, but was traded to the Monarchs. She was part of Sacramento’s 2005 championship team. Pitcher Joe Saunders (1999) led the Spartans to the 1998 state title and went on to pitch at Virginia Tech, where he compiled a 27-7 record. The Los Angeles Angels of Anaheim selected the left-hander in the first round (No. 12 overall) of the 2002 MLB draft. He now pitches for the Arizona Diamondbacks.

*Quotable: "Every elimination game, they played their best baseball. You can’t ask for more than that from a team. They just love being in these situations. They play loose and they have a good time. They all love each other and that’s what it takes to win games like this against a great team." —West Springfield baseball coach Jason Olms after the Spartans defeated Lake Braddock to win the 2012 region title. 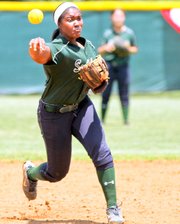 The Stallions started 0-3 in 2011, losing to Hayfield, Oakton and West Potomac. But led by a stout defense, South County rebounded with 11 consecutive victories and a trip to the Division 5 state championship game. The Stallions finished state runner-up, along with securing a Northern Region championship and a share of the Patriot District title.

Quotable: "I feel like a champion. We worked so hard to get here since our sophomore year—everybody worked hard." —South County’s Devin Vandyke after the Stallions defeated Yorktown to win the 2011 Division 5 Northern Region football title.

Austin Perryman (4), Anthony Bowen (25) and the Fairfax football team made the Division 6 playoffs in 2011.

The Rebels won six of their first seven games in 2011 and qualified for the Division 6 playoffs with a 6-4 record. Fairfax lost to No. 2 seed Centreville in the regional quarterfinals.

*Famous Graduates: Bill Pulsipher (1991 graduate), a left-handed pitcher, was selected in the second round of the 1991 MLB Draft by the New York Mets. He was part of a promising young Mets pitching trio known as "Generation K," which included Jason Isringhausen and Paul Wilson. Isringhausen found success as a closer, but each pitcher’s career was affected by injuries. Owen Schmitt (2003) is a fullback for the Oakland Raiders. He played collegiately at West Virginia University and was a fifth-round selection of the Seattle Seahawks in the 2008 NFL Draft. He also played for the Philadelphia Eagles. "Good Morning America" weather Anchor Sam Champion (1979) attended Fairfax High School.

*Quotable: "We have the mentality and the attitude of we are not the Fairfax of 2006, 2007, 2008. We are a different team, and we are one that needs to be reckoned with." —Fairfax football coach Kevin Simonds after the Rebels beat Washington-Lee early in the 2011 season.

The Cavaliers, two years removed from a region runner-up finish, started 0-5 in 2011 en route to a 2-8 campaign. Woodson’s wins came against T.C. Williams and Annandale.

*Famous Graduates: Andy Heck (1985 graduate) was a three-sport athlete who went on to play football at Notre Dame. He switched from tight end to offensive tackle and was a team captain and first-team All-American on the Fighting Irish’s 1988 undefeated national championship team. The Seattle Seahawks selected Heck in the first round (No. 15 overall) of the 1989 NFL Draft. He played 12 seasons in the pros for the Seahawks, Chicago Bears and Washington Redskins. He played in 185 games and made 139 starts. Abe Thompson (2000) played soccer at the University of Maryland. FC Dallas selected him in the second round of the 2005 MLS Supplemental Draft. Michael Lahoud (2005) played soccer at Wake Forest University, where he helped the Demon Deacons win the 2007 national championship. Chivas USA selected Lahoud in the first round (No. 9 overall) of the 2009 MLS SuperDraft.

*Quotable: "Our motto is we’re turning the butterflies into rhinos. We have butterflies in our stomach, we’ve just got harden it up and play to the end." —Woodson’s Rachel Conway after the volleyball team clinched a state tournament berth in 2011.

The Hawks finished 8-2 during the 2011 regular season and qualified for the postseason, where they lost to Lee in the Division 5 region quarterfinals.

*Quotable: "The frustration feels like [a product of] it could have been anyone at the end, and we’re the ones that haven’t gotten it in so long. That’s where I feel frustrated. It’s not a frustration [about] the way my team played, at all." —Hayfield girls’ lacrosse coach Sarah Burrowbridge after the Hawks lost to Yorktown in the district final for the third straight season.

Michael Jolly, with ball, and the Lee football team reached the playoffs in 2011.

The Lancers won their first four games of 2011, qualified for the Division 5 playoffs with a 6-4 record and reached the region semifinals.

*Famous Graduates: Melissa Belote Ripley won three swimming gold medals as a 15-year-old in the 1972 Olympics, including setting a world record in the 200-meter backstroke.

*Quotable: "The team’s ecstatic right now. Last year they went 1-9, so we’re still trying to learn how to win and we’re still trying to learn how to finish off teams, but the sky is the limit for these guys. They have so much confidence right now that they’re going to keep rolling. They’re very confident in what they can do and they know they can come out and compete with any team in the region." —Lee football coach Clarence Martin after the Lancers improved to 3-0 in 2011.

*Quotable: "It’s fun. You get some talent you don’t normally have. It’s kind of like coaching at a private school or something. You’ve got your shooters, you’ve got big men [and] you’ve got ball handlers. I was like a kid in a candy store; I didn’t know what to do and what to call." —Edison boys’ basketball coach Terry Henderson, who led the National District/Liberty District team in the Northern Region all-star game.