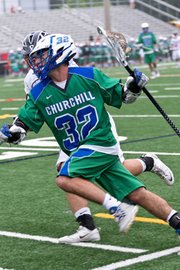 After reaching the playoffs in back-to-back seasons, the Bulldogs finished the 2013 campaign with a 1-9 record. It was Churchill’s first losing season since 2007.

Quotable: “We’re a program. We don’t rebuild anymore, we just reload. We’ve got a great JV program with a great JV coach. Our guys are involved — if they’re not playing a second sport, they’re involved in lacrosse year-round now. They’re doing all the right things.” — Boys’ lacrosse coach Jeff Fritz.