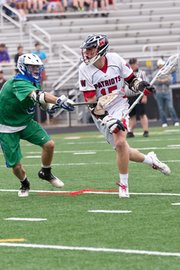 The Patriots won three of their first four games in 2013, but finished with a 5-5 record.

Quotable: “My freshman year is the last time we won [the region title] and I just know the feeling — I really wanted to get it back. It was hard to get all the seniors wrapped around how good it feels and how much work really needs to be put in, but we definitely put in the work and it shows.” --- Then-senior lacrosse player Austin Schoenfeld after the Patriots beat Churchill in the region final.