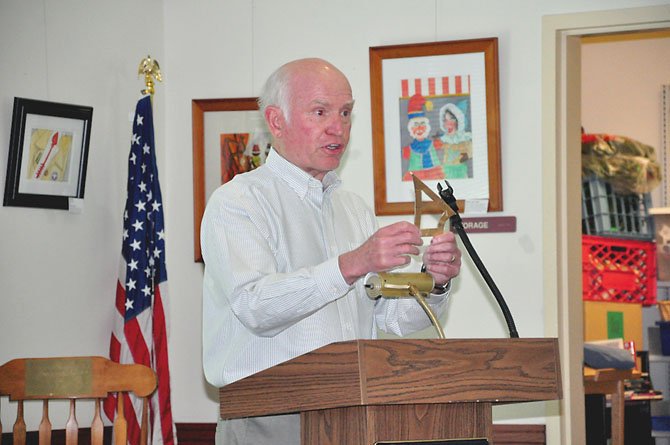 Roger Bailey, a sundial designer, speaks at the Great Falls Library Aug. 15 about a replica sundial he hopes to build at Observatory Park in Great Falls. Photo by Alex McVeigh.

Great Falls — While most of the tools available at Observatory Park at Turner Farm are designed to look upward, there are plans for additional features on the ground as well. The Analemma Society, which hosts programs and facilities at Observatory Park, is raising funds to build a second sundial.

Canadian sundial designer and secretary of the North American Sundial Society Roger Bailey spoke at the Great Falls Library Aug. 15, which was followed by a fundraiser for the dial. Bailey is hoping to build a replica of the sundial at Damascus at Observatory Park.

A design of the sundial at the mosque in Damascus, which the Analemma Society hopes to fund a replica for Observatory Park at Turner Farm.

THE SUNDIAL Bailey will base his design on was built by Arab astronomer Ibn al-Shatir in 1371 at the Great Mosque in Damascus. It was a breakthrough piece of technology in many ways.

"I’m interested in sundials because it’s the way I see the world, it’s something I look for when I travel," he said. "And when I find them, they tell me a tremendous amount about the culture and history of the people there. What they knew, when, and it’s a remarkable story. This technology was very advanced 650 years ago."

Fred Mancinella of Great Falls stopped by the lecture while returning some books, and said he had no idea how complex the history of sundials was.

"I think of sundials as those cheesy things in a birdbath, I had no idea how connected they were to the way we measure time to this day," he said. "I think it would be a great addition to this community, because a lot of people will be interested."

Bailey’s last design, at the Botanical Gardens in Missouri, is the only public-used Islamic sundial in the United States.

"This defined a new standard for time. That was significant not just in the Islamic world, but in the whole Western world… Muslim sundials are so important because the question they were trying to answer is, ‘how do I know what time it is? I know when I’m hungry and I need sleep,’" he said. "But the need for time is determined by other reasons, one of those is the time to pray. In their culture, all their prayer times have to do with the position of the sun, the sun is their clock."

Bailey will take specific measurements for Great Falls and the exact location of the dial.

"There is a lot of technology and engineering put into making the dial readable for this latitude," Olin said. "Damascus, where it originally was, is at a different latitude, and sundials are very latitude dependent."

Charles Olin of the Analemma Society shows off a pocket sundial at the Great Falls Library Aug. 15. The society is raising funds to create a new sundial, a replica of the one at the Great Mosque in Damascus, at Observatory Park.

Bailey said that he is unable to design the Arabic script as part of his plan, but the society is planning on reproducing the script, along with a translation.

"The one thing that my design does not have is the Arabic script. There have been people working with the Analemma society traveling to Damascus and read and find out what the script says, and we’re looking at that information coming back.

THE KEY CHALLENGE then will be someone that knows calligraphy, because it’s not a trivial thing to reproduce."

Charles Olin of the Analemma Society said that in addition to the dial itself, other features will be added.

"We’re going to spend some money on security for the dial, because of things that have been happening, it’s a Muslim dial," Olin said. "So we’ll take some precautions to protect it."

More information on the Analemma Society can be found at www.analemma.org.