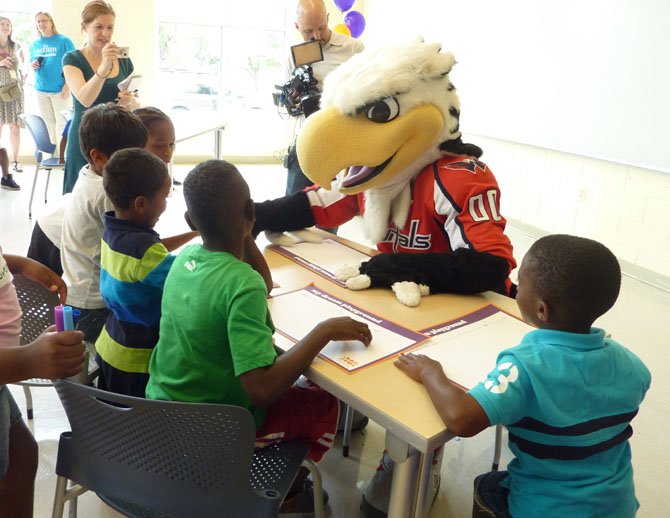 Alexandria — More than 40 Alexandria children joined Washington Capitals mascot Slapshot and Elliot Segal of the Elliot in the Morning Show at the Charles Houston Recreation Center Aug. 15 for Design Day, a day set aside for children to draw their dream playground for Old Town's Hopkins-Tancil Court area.

So Kids Can co-founder Elliot Segal, center, gets help from the brother and sister team of Asante, 4, and Asantawaa, 5, during the Aug. 15 Design Day at the Charles Houston Recreation Center.

A joint effort of the Alexandria Redevelopment and Housing Authority, KaBOOM! and So Kids Can, elements from the children's Design Day drawings will be incorporated into the final design for the new community playground to be built on Sept. 13 at S.T.A.R.S. Playground at Hopkins-Tancil, where equipment is outdated and not wheelchair accessible.

“Mike and I have had a blast with this,” said Segal, a co-founder of So Kids Can with Capitals defenseman Mike Green. “The people at KaBOOM! and everyone involved are just great.”

Funds for the playground were raised through So Kids Can during the 2011-12 Washington Capitals season. Green and Segal created the So Kids Can program in 2008 to benefit youth-focused, nonprofit organizations. Last season Capitals forwards Nicklas Backstrom and Brooks Laich also joined the cause, which has raised more than $200,000 for various youth organizations. 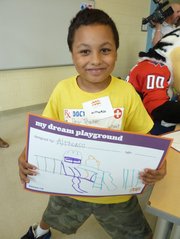 Eight-year-old Alphonso displays his drawing during the Aug. 15 Design Day at the Charles Houston Recreation Center.

The playground will be the second built by KaBOOM!, the Washington Capitals and So Kids Can, and is one of more than 150 playground builds KaBOOM! will lead across the country in 2012.