Contrabands and Freedmen’s Cemetery Memorial on pace for Spring 2013 opening. 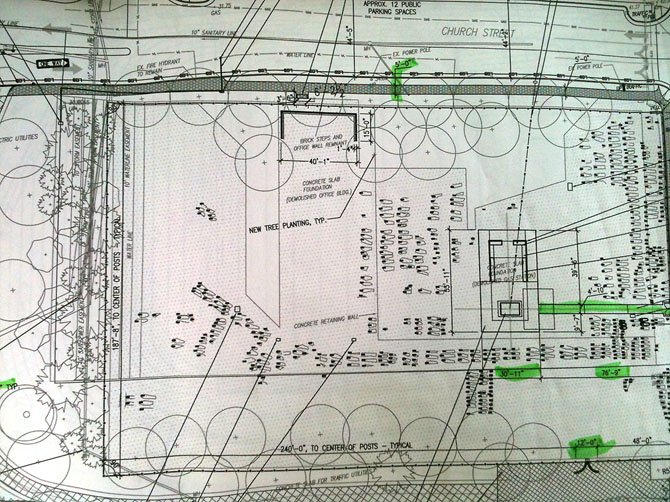 By By Mark McHugh

Alexandria — In Spring 2007, the City of Alexandria purchased a desolate and overgrown lot on the southern edge of town and promptly razed the site’s two buildings.

Six years later that same spot is going to be an historical and appropriate homage to that place’s unseen — and unheard — inhabitants when the city dedicates the Contrabands and Freedmen’s Cemetery Memorial this spring.

The project, which will cost around $11 million, receives funding from the City of Alexandria, the Federal Highway Administration, Virginia Department of Transportation, a grant from Save America’s Treasures, and funding from a partnership between the National Parks Service and the National Trust for Historic Preservation.

The freedmen’s cemetery at the corner of South Washington and Church streets has been owned by several entities since it was closed in 1869.

Freedmen were African Americans freed from slavery by their owners. Contrabands were slaves who escaped to freedom or were brought within Union lines during the Civil War.

While the property’s previous owners literally bulldozed their way there to benefit business, the city has taken quite a different approach: it is redeveloping the area to revere the grave sites.

The cemetery has been blanketed with several hundred truckloads of fill soil to make way for a grass mixture of fescue and Kentucky bluegrass. 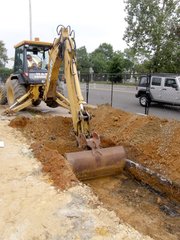 “We didn’t move dirt,” said Mitchell Bernstein, civil engineer for the city. “We just took off the vegetation at a very shallow depth, and then brought the soil in. The only digging we did was in a preventative manner, to make sure we weren’t violating any graves.”

Archaeologists have located grave shafts, and in many cases, the outline of hexagonal “shouldered” style coffin tops, through identifying changes in soil color and texture. According to city records, no grave can be associated with a particular person.

This renovation is hardly only aesthetics or grass deep, assured city officials, who said that the project has been undertaken with a great deal of historical and cultural sensitivity.

“The challenge is trying to construct something as a suitable memorial and not have any negative impact on the cultural resource,” Baker said.

The centerpiece of the memorial area, called a “Place of Remembrance,” is an open space housing interpretive walls with several panels detailing the cemetery’s history, and a list of recorded names of the interred based on information from the Gladwin Record. A listing maintained from 1863 to 1869, the record includes information of those interred, including their name, date of death or burial, next of kin or individual providing the report, residence or place of death, and additional comments about the burial or cause of death. A sculpture is to be installed at the front of the open space.

Fifty-three feet long and 31 feet wide, the place of remembrance is the highest point in the cemetery, where a Mobil gas station once stood.

In recent years the cemetery was a roadside brownfield strewn with trash, including slab remnants of the gas station and an office building.

A portion of the office building’s foundation on Church Street will stand, because the project’s planners wished to not gloss over past transgressions of the cemetery. “They didn’t want this to be forgotten,” said Bernstein.

The city has taken a painstaking approach toward design and construction with respect to the graves.

To that end, 8-inch diameter steel helical piles will be used as foundations to anchor some segments of the galvanized steel tubing fence line.

“It minimizes the footprint of the pier,” said Bernstein, who was onsite earlier this month.

Bernstein motioned over to the outer proposed fence area, where different colored stakes indicated proximity — and safe construction distances — adjacent to gravesites. “We have a variable system designed,” he said.

Workers of Garcete Construction Company Inc., of Bladensburg, Md., are following cues from Bernstein and Mitchell to maintain the sanctity of the grave sites as work progresses.

“Everything had to be designed very carefully, to avoid the graves,” Baker said.

The city will lay place markers on the grave sites found during the archaeological studies. Some of them will be outlined with borders to give visitors a sense of scale, Baker said.

“A lot of the people buried here were children, and a lot of the shafts were very small, so you should be able to get a sense of the size of the child that was buried,” Baker said.

Survey information indicates gravesite positions. “We have the survey data that shows exactly where they are located, so we can come back after they are finished with the grading,” Baker said. “They will put down the grass, and then we will go back and relocate them and put the markers on top of the coordinates.”

The cemetery holds not only the graves of freedmen and contrabands. The oldest artifact yet found in Alexandria, a 13,000-year-old Clovis spear point, was recovered here in 2007. A marker will be placed at its recovery site.

Additionally, a place marker will be laid to commemorate a spot where 124 United States Colored Troops were buried. These soldiers’ graves were disinterred in 1865 and moved to the Soldiers’ Cemetery, now the Alexandria National Cemetery.

A gentle westward slope descends to a low-lying area, which at one time led to a creek. This section will be designated a “passive” portion of the memorial, conducive to walking and gathering. This area is outside the archaeological protection zone, where trees will be planted, along with a walkway.