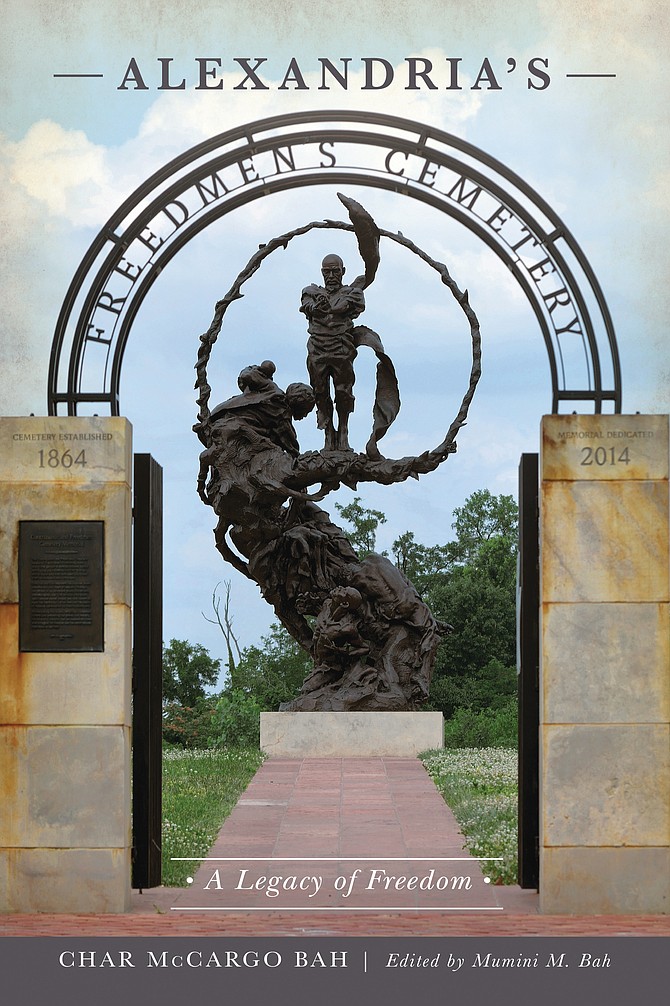 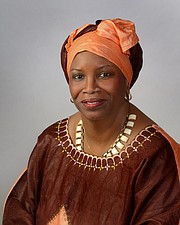 These days, it can be simple to discover more information about distant relatives. With Internet access, a computer, and a few keystrokes, you can accurately add a branch to your family tree.

However, it’s not easy when any of your family tree’s branches are made up of relatives who had been American slaves. When websites don’t get the job done, you turn to a professional genealogist like Char McCargo-Bah, the Alexandria native who identified the descendants of 171 of the Civil War-era freed slaves who had been buried in Alexandria’s Freedmen Cemetery during the 1860s.

“Today people think that if evidence or any piece of information is not in a database, then it doesn’t exist,” said McCargo-Bah, who spent from 2008 to 2014 searching for Freedmen family members. “But, that’s not true. Knowing how and where to look for data, I was able to find the descendants of 171 freedman and contrabands that the city of Alexandria had lost track. Some things I did: I went to the National Archives and the State of Virginia Archives where I was able to identify a lot of the southern slave owner names that appeared among former slaves in Alexandria. I researched the school board, the city directory, and consulted with people who my family knew in Alexandria. Then once I talked to a few family members of the former slaves buried in Freedmen Cemetery, it went viral and most everyone who thought their family was involved in the cemetery wanted to get in touch with me.”

Don’t let the “free” in Freedmen cemetery confuse you, either. Distinct from the rest of Virginia, Alexandria was Union territory during the Civil War. During this time, thousands of former slaves fled to Alexandria to seek both freedom and employment opportunities. And with the rampant disease that inevitably comes with a swelling population in a war torn region, Alexandria established Freedmen Cemetery for the specific purpose of laying to rest roughly 1,800 former slaves, many of whom known as contrabands.

The term “contraband,” McCargo-Bah explained, was often applied to former slaves once they officially made it to places like Alexandria. It was a status that prevented them from being returned to their former masters.

“I had been a member of The Friends of Freedmen Cemetery when the City of Alexandria retained my services to finish identifying the descendants of the cemetery,” McCargo-Bah said. “Alexandria needed me to find all the families in order to complete what now stands as the Contrabands and Freedmen Cemetery Memorial.”

After tracing the living descendants of 171 of the buried contrabands and freedmen, McCargo-Bah chronicled the process in her first solo book, “Alexandria’s Freedmen Cemetery: A Legacy of Freedom.” The book was published on Jan. 21.

“In doing genealogical research, you obtain as many records as you can in the research process, and by the time you complete the research, you end up having more information than you need,” she said. “I still had it all after the dedication ceremony, so in 2015 I thought, ‘I’m going to write a book.’ It’s about the contrabands whose families I found. For each family I found, I did a narrative about their person … how they got to Alexandria. For each chapter in the book, I introduced the Spoken Word in the voice of a slave. I wanted every family and every reader to feel the magnitude of what was going on with that period of time.”

When McCargo-Bah first became a Friend of Freedmen Cemetery in 1997, she could in no way have imagined the significance – and complexities – that would come with the journey.

“Finding the descendants for the memorial was not as simple as I thought it would be,” said McCargo-Bah, a genealogist of 38 years. “Even though I am African American and I was born and raised in Alexandria, it wasn’t easy. With older African American, you must win their trust. You must understand the taboos in their culture. African Americans wouldn’t talk to me until they could really confirm I was a ‘home girl’ – that, I was born there. And it made sense. It’s genealogy, so it’s personal.

“This part of history has always been difficult to talk about,” McCargo-Bah said. “Slavery is not something easily discussed without provoking a lot of emotions … instead of researching and discussing the issues that surround this period of time, it is easy for some people to overlook that part of history. The reality is that many freed former slaves were buried in places designated for African American people. After the Civil War, many former slaves were still associated with their former owners, they were buried on their owner’s property. Some were buried at their master’s church cemetery, if they still attended that church after the war.

“One of the biggest surprises, I encountered through this whole process was that only two out of 171 families knew their ancestors were buried at the Freedmen Cemetery, or that the cemetery even was there,” she said. “While this cemetery has no headstones, we have the burial ledger book that gave us the names of the deceased people. The burial records have survived and are at the Virginia State Archives, in the Library of Virginia in Richmond. I know of no other African American Civil War cemetery that has a list of names of people buried there. With the absence of headstones in this cemetery, we are fortunate that we have the burial ledger. The ledger reveals information that would have never been on the headstones.”

Some of the unknowns surrounding Freedmen Cemetery exist because the gravesite itself was buried – hidden beneath a busy gas station – for so long.

According to the Contrabands and Freedmen Cemetery Memorial’s official website, it was in 1864 that Union General John P. Slough designated a parcel of land at the corner South Washington and Church expressly for the burial of African Americans.

By 1870, the United States government had returned the land its original owners, though. It wouldn’t be long before the 1,800 former slaves buried on the property were all but forgotten.

“The Catholic Church got it next,” McCargo-Bah said. “Then they sold it to a person, who sold it to another person who put a gas station on it. That gas station was there for more than 50 years before the city bought the land. When they started digging for the Woodrow Wilson Bridge construction and renovations began in 2006, they started seeing the remains. The Freedmen Cemetery wasn’t on the current map, so they had to go back and look at the Civil War map. That’s when they realized what they were digging into. Archaeology came in, and they decided not to disturb any of the remains. I saw all of this playing out in the newspaper. I knew I had to get involved.”

Finally, in 2008, the Friends of Freedmen Cemetery saw their work paid off when the city of Alexandria put the official memorial into their plans and enlisted the specific help of McCargo-Bah.

“The journey to getting the cemetery registered as a historic place took a lot of hard work from many people,” McCargo-Bah said. “The Friends of Freedmen Cemetery, the Office of Historic Alexandria, mayor and City Council members, Congressman Jim Moran and the developers of the Woodrow Wilson Bridge all played a part with the 2000 establishment of the historic sign and the Contrabands and Freedmen Cemetery Memorial was established in 2014.

“Knowing the names of these individuals opened a better interpretation of their lives prior and during the Civil War,” McCargo-Bah said. “It’s because of the Gladwin Ledger of Burials that their lives can be documented and connected to living descendants. Bringing light to these lives is important because their migration to Alexandria during the Civil War proved that freedom – both for themselves and for their children – was so extremely important to them that they were willing to die for it.”

“Alexandria’s Freedmen Cemetery: A Legacy of Freedom” is filled with information and biographical information, but it is also so much more than a compilation of names, facts, and timelines.

“It was really interesting because a lot of the families connect to each other in multiple ways, so the book is made up of narratives about the families and how they all connect.” McCargo-Bah said. “It actually took me several months to come up with the hook. It’s structured where each person’s story – each chapter – opens up with a firsthand narrative, an account in their own ‘voice.’”

This structure resonates with the families, and with readers in general.

“I’m really enjoying the book,” said Michelle Todd, McCargo-Bah’s close friend and genealogy mentee. “She has a special section before each chapter called ‘Spoken Word.’ She groups families together who she found out were related. It’s amazing what she can find. I’m always in awe of her. The way she wrote this book, you can feel these people's pain. You can envision them. You can feel everything. It’s truly amazing.”

As a genealogist, McCargo-Bah has a keen perspective as a storyteller in these cases.

“There was a banquet for the memorial when it was finished and ready for the public,” McCargo-Bah said. “When I got up to speak, I was able to talk about each one of the families. I could give them something that others couldn’t, because of the level of research that I’d done. I had very specific information.”

With “Alexandria’s Freedmen Cemetery: A Legacy of Freedom,” McCargo-Bah’s quest with Freedmen Cemetery may officially be in her rearview mirror. However, only time will tell how many future genealogists she will inspire.

“I retired in 2014 from my full time job with the government, and now I’m devoting my time doing what I love to do: genealogy and writing,” she said. “When Alex Haley released his book [‘Roots: The Saga of an American Family’] in the 1970s, it made us all realize it was possible to trace African history. My passion for it has only grown since then. For a lot of people, it was about ‘getting back to Africa.’ But, it was never like that for me. It has always been about uncovering truths and determining how people and families get where they are, and how they’ve found their place.”

Also, join McCargo-Bah for her book signing at the Alexandria Black History Museum at 902 Wythe S., on March 9, at noon.