Proposal would fund fix to lingering problems as well as handle demands of development. 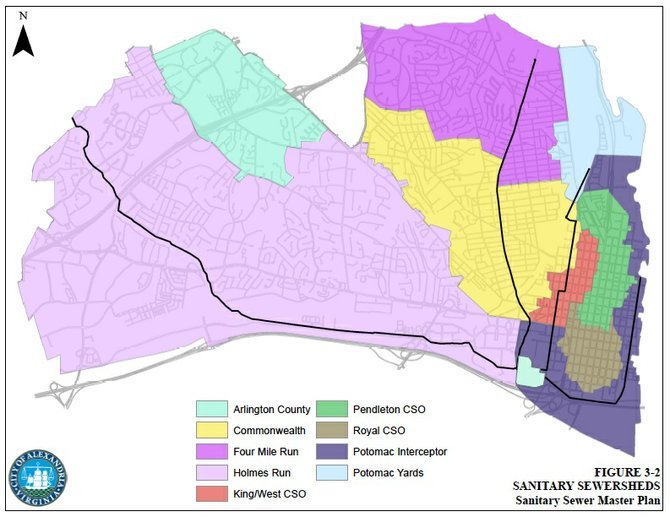 Alexandria sanitary sewersheds. Courtesy of the Alexandria Department of Planning and Zoning

Lately, it seems that city officials have their minds in the gutter — literally.

City leaders are planning a public forum later this month for residents to learn about the sewer master plan, a document designed to handle expected growth in the coming years and handle existing needs in the city. The plan calls for developers to pay for new demand created by growth and for taxpayers to pay for existing needs.

“The sanitary sewer system isn’t the kind of thing people think about unless there’s a problem,” said Emily Baker, city engineer with the Department of Transportation and Environmental Services. “We’ve tried to develop a reasonable and fair way to pay for the city’s needs going into the future.”

One of the major existing needs has to do with leaky pipes throughout the city, where stormwater is leaking into pipes intended to carry raw sewage. That increases the gallons that flow into the wastewater treatment plant, which means more money is spent treating it. Although the plan does not call for increased fees to pay for this in the near future, Baker says city officials may see a need for increasing the sanitary sewer fee in the future. That’s the fee charged to individuals users based on how much water they consume, currently $1.25 for every 1,000 gallons consumed. Concern about increased rates has created concern among some.

“The members of the Alexandria Federation of Civic Associations ask the city defer action on the proposed Sewer Master Plan until February to afford the organization a reasonable opportunity to provide timely citizen commentary,” read a motion the group unanimously adopted earlier this month.

“I would like to see this deferred past February,” said Lynn Bostain, co-chair of the federation. “There are too many unknowns.”

Perhaps the biggest unknown is how the city will handle the massive development and redevelopment in the near future. In the next 30 years, city officials estimate that an additional 50,000 people will live in Alexandria. That means the city’s wastewater treatment plant will need capacity to handle an additional 4 million gallons a day. One option for handling that would be purchasing the extra capacity from Fairfax County, which would cost about $58 million. Another option would be to fund an upgrade of hardware owned by Alexandria Renew Enterprises, formerly Alexandria Sanitation Authority.

“We’re recommending that Alexandria Renew Enterprises handle the extra capacity,” said Baker. “It would cost less money, although going that route would limit the amount of nutrients that could be discharged from the facility.”

ONE LINGERING issue that the master plan does not address is a looming threat that the Environmental Protection Agency might force Alexandria to reduce the amount of nutrients dumped into the Potomac River each year. Alexandria is one of three communities that has an antiquated “combined” sewer system, meaning raw sewage mingles with stormwater runoff on its way to the treatment plant. Every time the city experiences a heavy rainfall, which is about 10 times a year, the floodgates open up and thousands of gallons of raw sewage are dumped into the river. The EPA has already demanded that the District of Columbia reduce the total maximum daily load of nutrients, which will cost billions of dollars.

Baker said the sewer master plan doesn’t address that issue because city officials are still negotiating with federal regulators for a permit to cover its combined sewer, one of only three in Virginia.