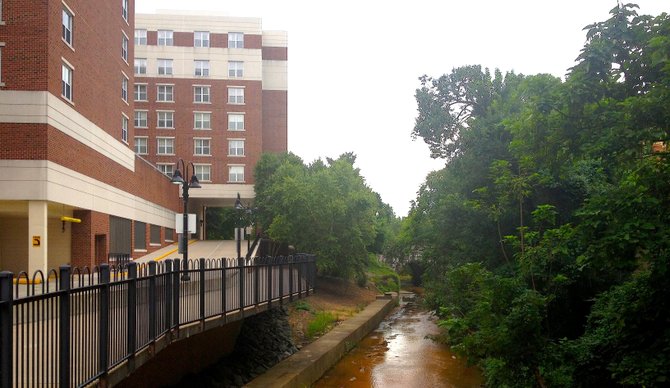 The outfall next to the Residence Inn on Duke Street overflows after about 0.16 inches of precipitation. That happens about 28 times a year for an average of eight hours at a time. Photo by Michael Lee Pope. 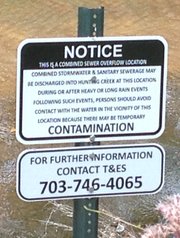 Alexandria city government signs are misleading, suggesting that raw sewage is dumped into Hunting Creek "during or after heavy or long rain events." In reality, that happens with as little as 0.03 inches of rain.

Don't believe the signs city officials have posted at the four outfall spots that dump raw sewage into the Potomac River. The truth is much worse.

The signs say rainfalls that are "heavy" or "long" will result in raw sewage overflowing from the city's treatment plant directly into the river. But a new permit application to state officials paints a different picture. According to information submitted to the Virginia Department of Environmental Quality, one of the outfalls is triggered with as much as 0.03 inches of rain.

"The system cannot carry anything more than a slight drizzle," said Bill Skrabak, deputy director of the Department of Transportation and Environmental Services.

City officials are in the midst of applying for a permit to allow Alexandria to continue dumping raw sewage into the Hunting Creek while a Long Term Control Plan is created. A draft permit now under consideration kicks the can down the road until 2035. But critics say the city has been dumping its human waste into the river too long, and that the time for action is now. They say city officials should take action now before the Environmental Protection Agency forces Alexandria to take action, as it has already done in the District of Columbia and a number of other cities.

"Take a look at what's happening across the country," said Bill Dickinson, a member of the Sanitation Authority. "Why would we be exempt?"

THE PROBLEM HAS LONG festered under the streets of Alexandria, which installed a cutting-edge sewer system in the 1900s. Instead of throwing raw sewage into the alleys of Old Town, residents were able to combine the wastewater with rainfall in pipes under the streets. Now Alexandria has a legacy problem. Along with Lynchburg and Richmond, Alexandria must now figure a way to fix its combined sewer system.

"Every time you flush your toilet in Old Town, it could end up in Dyke Marsh as untreated sewage," said Glenda Booth, president of Friends of Dyke Marsh.

The permit application reveals that more than 100 million gallons of overflow are released into Hunting Creek each year at four points in Old Town. That's a mix that includes a vast majority of rainwater mixed with a smaller percentage of raw sewage. City officials estimate that about 10 million gallons of untreated wastewater are discharged into the creek each year, a volume that's shocking to many who have long viewed the city as a leader in environmental sustainability.

"The way this has been presented to the public has been to minimize the number of events and the amount of crap we are tossing into the Potomac," said Jack Sullivan, who lives in Seminary Hill. "I don't think anybody was aware of the extent of this problem."

IN RECENT YEARS, federal officials have been closing in on cities that have outdated combined sewer systems, which mix raw sewage with rainwater and dump the excess into nearby rivers. So far, all the attention has been focused on large cities such as Philadelphia and New York. The District of Columbia is spending about $1.5 billion to construct 10 miles of underground holding tunnels to store the combination of sewage and rainwater until the treatment plant has the capacity to handle it. Eventually, federal officials will force Alexandria to take action.

One option would be digging into 540 acres of Old Town streets to physically separate untreated wastewater from stormwater runoff. That would be the most expensive solution, estimated at $200 million to $300 million. A more likely option for city officials is building the same kind of underground storage units that the District of Columbia is constructing, which would cost anywhere from $100 million to $200 million. For now, though, city leaders don't have a plan for how they are going to clean up the mess. And they are hoping the state grants a permit that allows the city to extend the deadline 32 years.

"It is simply unacceptable to allow any amount of untreated sewage to enter the waterways from the city of Alexandria or any source in the 21st century," wrote Booth in a letter to city officials this week. "While the permit application and the (Long Term Control Plan) contain mitigation projects and practices to reduce the amount of combined sewer outfalls, the they do not contain plans that would lead to eliminating the discharge of untreated sewage."