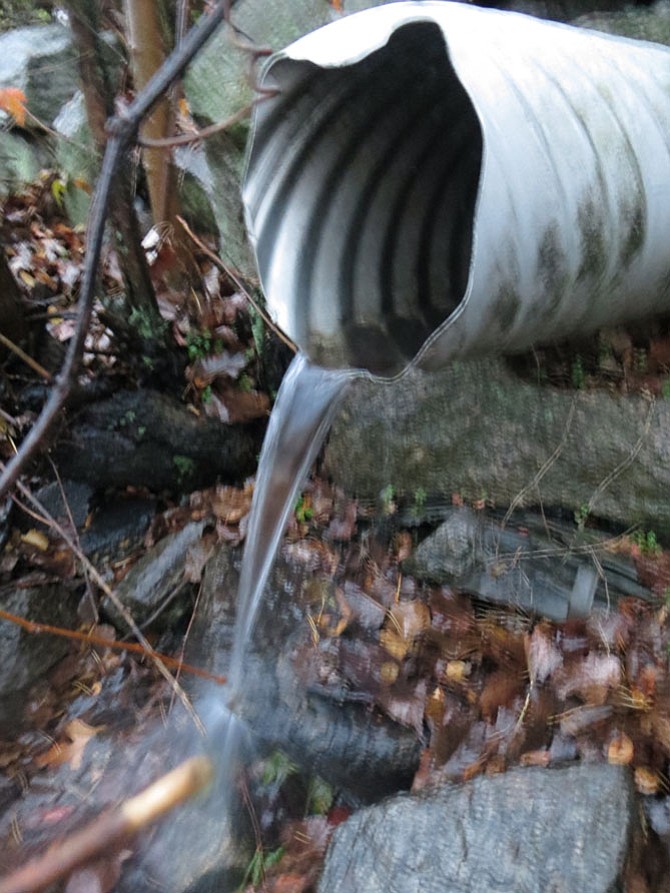 Outfall 001, source of sewage being dumped into Oronoco Bay. Photo by Vernon Miles.

Every year, Alexandria dumps 11 million gallons of raw sewage into the Potomac through Outfall 001. Just across the Oronoco Bay from where T.C. Williams High School’s crew team meets, a steady stream of rain water and unfiltered sewage spews out of a pipe beneath a wooden walkway directly into the Potomac River. While the city has initiated plans to address the other four outfalls, planning to address the largest outfall won’t begin until 2026.

“These are extremely complicated and large-scale engineering and construction projects, which will be very expensive and create considerable impacts in the neighborhoods where work must be performed.” — Craig Fifer, Director, City Office of Communications and Public Information

On Dec. 2, the city submitted a Long Term Control Plan Update to to the Virginia Department of Environmental Quality. The document commits to assessing the Oronoco Bay sewage issue in 2026, six years ahead of the current plan, and that a feasibility study will be conducted between 2018 and 2023.

But activists say those plans will do too little, too late.

“They voted to accelerate their review,” said Dean Naujoks, Potomac riverkeeper with the Potomac Riverkeeper Network. “That’s just review, not fixing it, but that still means in 15 years they will revisit outfall 001 and start talking about the process. Seventy million gallons a year of raw sewage into the waterfront area for 15 more years is not acceptable. It’s that simple. From my perspective as the river keeper, it’s real easy. It’s not good for the river.”

Old Town Alexandria still uses an antiquated combined stormwater-sewage system. Whenever it rains, that water goes into the sewer system. If Old Town experiences moderate rainfall, the rain and sewage are both flushed out into the Potomac or Hunting Creek. For Outfall 001, 0.06 inches of rainfall triggers an overflow.

Washington D.C. uses a similar system and dumps 2.5 billion gallons of sewage into the Potomac each year, but D.C. is currently in the process of modernizing its system. As per a 2010 federal mandate, Alexandria is working to transform the stormwater system at the three other outfalls into a capture and contain system. Underground tanks will store stormwater during overflow to be treated properly over time.

City officials say fixing the Oronoco Bay outfall won’t be simple and wasn’t part of the mandate. The plan to fix the other three outfalls will cost the city $188 million.

“These are extremely complicated and large-scale engineering and construction projects, which will be very expensive and create considerable impacts in the neighborhoods where work must be performed,” said Craig Fifer, director of the city’s Office of Communications and Public Information, in an email. “Since it is not practical to undertake construction work at all four outfalls simultaneously, we have implemented a phased approach that is recognized by the Environmental Protection Agency and Virginia Department of Environmental Quality [VDEQ] as responsible and reasonable. We prioritized the three outfalls at Hunting Creek and Hoofs Run because VDEQ required us to address these three. We have still been working on the Oronoco Bay outfall without a federal or state mandate to do so, and in fact we have just accelerated the feasibility element of that project by 14 years.”

“These results will inform the design of the Oronoco Bay outfall and allow us to design a potential solution at the right size and price,” said Fifer.

Vice Mayor Justin Wilson said that while the city was moving on an accelerated timeline to fix the Oronoco Bay outfall, time would be necessary to study the problem first and fully develop plans before diving in.

“We will also have substantial redevelopment there in the next 10 years and we’re getting developers to do sewer separation as part of their approval,” said Wilson. “We’re not standing still on this.”

But Naujoks said the idea of waiting for private development to move in before addressing outfall 001 is backwards. Naujoks said the recent withdrawal of developers from the Robinson Terminal North site’s redevelopment for unspecified reasons should signal concern.

“On one side of the site is a huge oil contamination from the former gasworks plant, and on the other side you’re right at Oronoco Bay, right where Outfall 001 discharges,” said Naujoks. “Could you imagine building a beautiful hotel with sewage coming right out from entrance. You’re overlooking an Oronoco Bay choked full of sewage, condoms, tampons, garbage, full of algae, from one side to the other. All those nutrients help algae grow, which is also a public health issue. Now you have bottles sitting on top of mats of algae. It’s disgusting. What hotel would want to have that sitting there? Alexandria wants to be the next Georgetown but keeps dumping sewage where they want people paddling. [This is] not going to go away. It may even hinder economic redevelopment. People are not going to accept [the city’s] plan is for Outfall 001.”

Professor R. Christian Jones at George Mason University said the algae produced by the stormwater-sewage system could have an impact on human health through intestinal pathogens.

“These are things that are in human waste and they don’t die immediately on flushing,” said Jones. “With contact through recreation or swimming you could be exposing yourself to a fair amount of risk for diarrhea or worse.”

Because of this, Jones said that if the city can only afford to focus on either the creek or river outfalls in the immediate future, it’s better to work with the sewage spilling into the smaller body of water.

“If there was more risk of a young person getting exposed to raw sewage, that’s more likely to happen by playing in the creek than from the river,” said Jones. “In that sense, that might have a higher priority, though it all goes into the main body of the Potomac. I would say going into a smaller body of water, particularly one that’s accessible by the public and by kids, would be more of a concern to me than just going into the river.”

But Jones also noted that algae in fresh water is not a major health risk to humans.

“You would have to ingest a tremendous amount of algae,” said Jones. “There are cases where livestock have drunk large amounts of water and are affected by toxins, but that takes a large dosage.”

The Potomac River is designated as a contact-recreation body of water. There are no swimming beaches and going into the water is discouraged, but Jones said that boaters can often be exposed to the water. Peter Stramese, head coach for the T.C. Williams boys crew team, said the team hasn’t experienced any major issues of sickness related to sewage and that they mostly practice towards the center of the river, away from the more shallow Oronoco Bay.

But eventually, Jones said Alexandria is going to have to take Old Town off of its combined sewer system.

“Newer parts of Alexandria are on separate sewers, which eliminates this problem,” said Jones. “It’s a retrofit issue, but there’s no way around it.”

Tom Soapes, president of the North Old Town Independent Citizen’s Association, said that residents of North Old Town understand the costs of the project and how disruptive the construction will be, but said that the citizens would rather have the problem fixed and soon than be perpetually delayed.

“Yes, it is a big cost item, but the city should proceed to get something done about this,” said Soapes. “There are bigger polluters, but that’s like saying the U.S. shouldn’t do anything about air pollution until China does. It’s ignoring the problem. You have to take some action, and sooner is better. We’re happy to see the study process accelerated, but we need to follow up on that and have action as soon as practical, as soon as that funding can be secured. Any sort of pollution affects the community as a whole.”