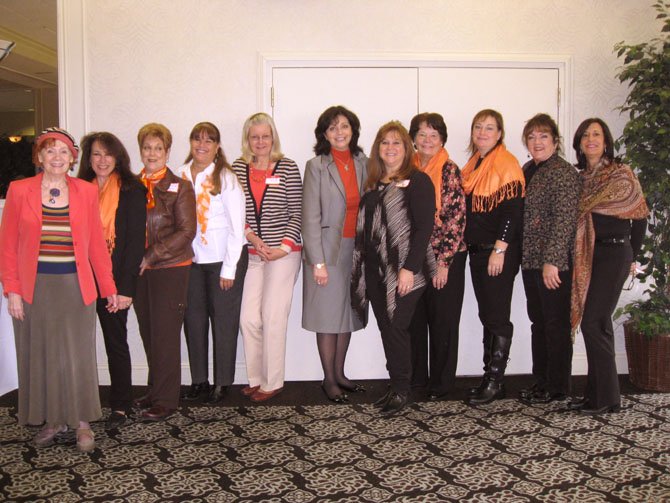 Potomac — Norbeck Country Club’s lush greens were pulsing with positive energy for women’s health on Saturday, Dec. 8. Eighty-six women and men gathered for Coffee, Tea & Brem to hear recognized international leader in breast radiology, Dr. Rachel Brem, director of the Breast Imaging and Interventional Center and vice-chair of Radiology at George Washington University Medical Center, speak about technology that is currently available for early detection of breast cancer and what should be available with a particular focus on surveillance for women with dense breast tissue.

“We can’t prevent breast cancer but it is very important to remember that it is a curable disease,” Brem said, “Our goal is to detect it when it’s most curable. Ninety-five percent of women with early stage breast cancer survive. Mammography is a lifesaver. Three quarters of women who get breast cancer have no other risk factor other than being a woman and the risk continues to go up throughout life as we age.”

Both Brem, who decided at age 12 that she wanted to find a cure for breast cancer after her mother was diagnosed with the disease, and the local 501(c)(3) foundation in her name, Brem Foundation to Defeat Breast Cancer, are pursuing support for federal bill H.R.3012 the “Breast Density and Mammography Reporting Act of 2011” introduced Oct. 5, 2011 by U.S. Rep. Rosa DeLauro (Conn.). They would like to see the state of Maryland adopt similar legislation. The bill “amends the Public Health Service Act to require mammography facilities to include information regarding the patient's individual measure of breast density in both the written report of the results of a mammography examination provided to the patient's physician and the summary of that written report given to patients.”

Women need to know if they have dense breast tissue and need to have access to screening equipment such as whole breast ultrasound approved by the FDA and known as ABUS (Automated Breast UltraSound). Brem has been conducting a dense breast clinical trial using ABUS in her center at George Washington.

“With 3-D ultrasound, detection is ultimized,” said Brem. “Through acquisition of the images and the information taken by a physician, we can see 30 percent more cancers in women with dense breasts. They are typically invasive cancers that would go on to become killer cancers if undetected.” She added, “Women with dense breasts have a 4 to 6 fold risk of developing breast cancer in their lifetime.”

Statistically, 40 percent of women have dense breast tissue. Breast size is not a factor. “Your breasts can be large, small, perky or saggy. The only way to tell breast density is with mammography,” said Brem. Physicians determine breast density using the American College of Radiology’s criteria. She explained that one-third of cancers in dense breasts cannot be seen by mammography because breast cancer and breast tissue are white on a mammogram leaving a lack of contrast.

Cathy Colleli knows first hand. “It’s not often that you get to thank someone personally who has saved your life. I’m here today because I said ‘yes’ to a friend and came to a Brem event and I listened to Dr. Brem and took her advice. Otherwise, this would have been a much different story and different outcome. So, please heed the advice and share it with others.” Colleli’s sister succumbed to stage 4, inflammatory breast cancer at age 35. Colleli is a three-year survivor of triple negative breast cancer. When she spoke with Brem in 2009 about her family history and asked her if she should get an MRI, Brem responded, “It’s not a question of whether you should get an MRI, it’s that you must get an MRI.” She added that Brem Foundation would pay for the test if Colleli’s insurance would not cover the cost. After much persistence with her physicians, Colleli, who previously had negative mammograms, finally received the MRI that detected her disease. “It was a very aggressive, silent gene growing in that dense breast tissue,” she said.

Friends Robbie Goldstein and Polly Miller of Potomac were impacted by Colleli’s story. “She was so informative and it was heart-wrenching to hear her personal story. We have to be vigilant and be an advocate for ourselves,” said Miller. Goldstein added, “This event raises awareness. Now, I have to think about this a little and maybe I need to do something more. Maybe I’m not breathing that sigh of relief after a negative mammogram.”

Karen “KT” Thomas of Village Settlements, Inc. in Potomac Village, rallied her friends and colleagues to hear Brem. “Dr. Brem is willing to stay out on the precipice and embrace technology that is not present in the entire medical community. She’s pragmatic and willing to step out of the mainstream to augment and encourage other professionals to fall in step with her. We celebrate this woman’s vigor and continued commitment to her lifelong mission and it’s a way to give back to the community that we are immersed in and be an integral part.”

Potomac resident, Allison Shaffer said, “I feel so informed and really need to spread the word about this dense breast issue to family and friends. I hadn’t heard about this until today.”

According to the House of Representatives’ web site, H.R.3102 has a grim prognosis with only a 2 percent chance of being enacted. Of the 40 bill co-sponsors, not one represents the State of Maryland. Currently, only five states, Connecticut, Texas, California, New York, and Virginia, have enacted legislation to require health care professionals to disclose breast density information to patients. Illinois and Connecticut require that 3-D ultrasound be covered by insurance. Brem said “We owe it to the women of this country to let them know they have dense breasts.”

Brem frequently testifies on Capitol Hill and her quest to have H.R.3102 become a federal mandate has gotten the ear of House Minority Whip Steny Hoyer who spoke at a Brem event in November. “Eventually the bill will get passed. Our representatives are coming to higher and higher consciousness,” Brem said.

“The message is so clear. Early detection is key. It [breast cancer] can be a devastating diagnosis. I wanted to come and be supportive because we’re all in this fight together,” shared Jeannette Mendonca, executive director of Hospice Caring, Inc.

Attendee Dick Dunkelbarger who lost his wife to cancer said, “A male friend of mine died one year ago with breast cancer. Men, being who they are, think that only happens to women, it’s not a problem for them, so they put off check-ups and that seals their fate. I love that women can support each other and know, ‘I’m not the only one.’ It sometimes gets lonely out there when going through treatment.” According to The American Cancer Society, the incidence of breast cancer in men is 1 in 1,000.

Brem reminds women to be their own best advocate by making sure their mammogram is digital not analog; to know whose reading their mammogram — being sure it is a radiologist who reads mammograms at least 70 percent of the time; to say ‘no’ to a surgical biopsy which should be done with minimally invasive image guidance and local anesthesia; and to perform monthly breast self-exams even after a negative mammogram. “Nobody knows you like you know you,” she added.

Filly Kotsatos, who is undergoing her last chemotherapy treatment this month before she begins six weeks of radiation, echoed the resolve sensed throughout Norbeck’s ballroom, “When I was diagnosed with breast cancer, I went hiking with a friend. I said to the cancer, ‘You’re not getting me, I’m getting you back.’ I felt so invigorated.”