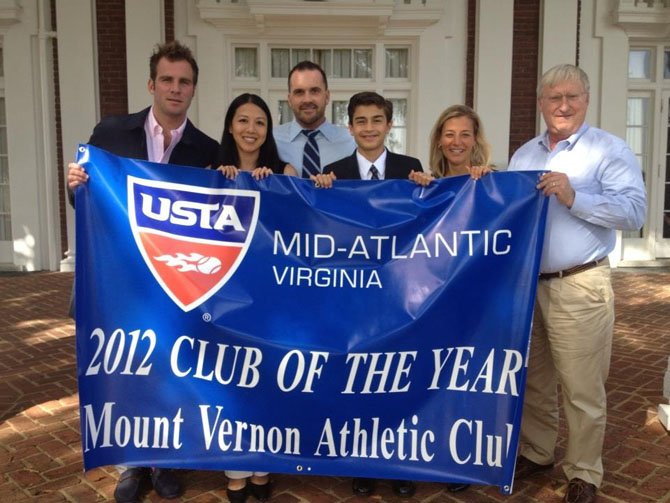 The Mount Vernon Athletic Club was honored at USTA/Virginia Tennis 2012 Annual Meeting and Awards Luncheon on Oct. 20 at The Country Club of Virginia in Richmond.

The local club took home the award for Club of the Year, 2012 while two staff members, Paul Fischer and Maggie Britvec, won individual awards for High School Coach of the Year and Community Outreach, respectively. Members of Mount Vernon Athletic Club to win awards were Alice Hume, who won Adult League Coordinator of the Year and The Clare Family, who were awarded Community Tennis Family of the Year.

The Annual Meeting showcased highlights from many of Virginia Tennis’ 2012 events, including USTA/Adopt-a-Unit. USTA/VA has supported the Adopt-a-Unit campaign by collecting donations for the troops at events throughout the state since 2011. “Tennis for our Troops” was the main theme of the meeting, which also included a clinic for military and their families with tennis professional, Stan Smith, once the top-ranked tennis player in the world and a champion at Wimbledon and the U.S. Open.