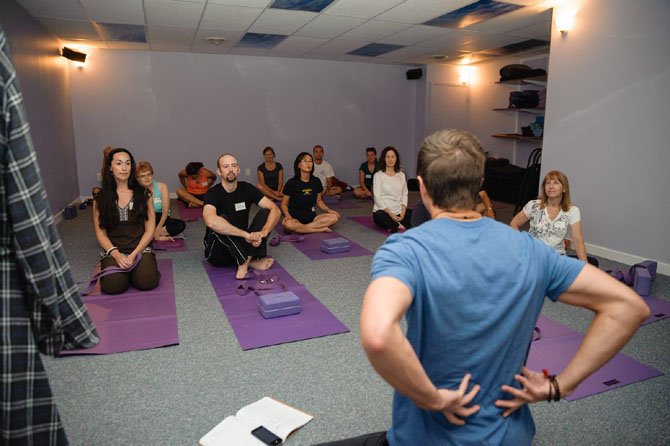 Students prepare to practice yoga at Dream Yoga Studio and Wellness Center in McLean. Experts say confusion and misinformation around yoga can keep some away from the practice. Photo courtesy of Dream Yoga

Joanna Mosely says she can’t tell a downward facing dog from a baby cobra. She belts out a perplexed “huh?” when asked if she knew the difference between Ashtanga and Bikram.

“I have been wanting to try yoga, said Mosely who lives in Alexandria. “But I don’t think I am flexible and I’ve just never gotten around to it.”

Experts say confusion and misinformation around yoga can keep some away from the practice. “There are many misperceptions about yoga, and yet so much to be gained if folks can find the right yoga for them,” said Luann Fulbright, of Dream Yoga Studio and Wellness Center in McLean.

Gentle Yoga: Gentle Yoga can be as dynamic as some of the more vibrant styles, yet is gentle on the body. Classes are often multi-level and do not assume prior yoga experience. They include breathing techniques, warm-ups and basic postures to increase mind-body connection, self-awareness and self-confidence.

Yoga Flows: Yoga flows are more invigorating. Postures are linked in a flow and provide some aerobic components while also improving strength and coordination. The classes assume a participant begins with a certain degree of strength and endurance.

Power Yoga: This dynamic yoga style includes specific sequences designed to build strength and stamina. These classes are often recommended for people with some familiarity of the basic postures.

Fitness Yoga: Fitness yoga is a newer expression designed to incorporate traditional yoga postures in a form common to most fitness clubs. Students warm up, practice more strenuous postures and then cool down. They tone the body, especially the core, and increase flexibility, balance and mind-body awareness.

Specialty Yoga: Yoga can also be customized for the special needs of a broad spectrum of groups, including expectant mothers, seniors and children, as well as for those battling life-threatening diseases or debilitating chronic conditions. Specialized training is important for teachers who work with these groups.

How should one begin a yogic journey? “The first thing a person should realize is that there are many different types of yoga,” said Joel Martin, an assistant professor of Kinesiology at George Mason University in Fairfax. “Some are geared towards providing a relaxing, non-strenuous experience, while others can be very strenuous — perhaps more strenuous than a typical resistance training routine. Since there are many different types of yoga, there is most likely some form that is suitable for just about anyone.”

Laura Burch, a spokesperson for Arlington-based Yoga Alliance, a nonprofit education and support organization for yoga in the United States, said, “Some of the language can be confusing to people who are not familiar with yoga.”

Among the most common styles of yoga in the United States, according to Yoga Alliance, are Ashtanga, Bikram, Hatha, Iyengar, Kundalini and Vinyasa. But how do you know which type is right for you? Understanding the different styles of yoga is a good place to start, say experts.

Dawn Curtis, of East Meets West Yoga Center in Vienna, says her favorite style is Kundalini. “It is often called the yoga of awareness. In the classes you can expect to encounter very challenging breath work, and there is vigorous movement within the postures. It is taught at the same level and students are encouraged to work at their own pace and to listen to their bodies. It is great for any age group.”

Ashtanga yoga, Curtis continued, is also good for most age groups. “It is especially good for the very flexible,” she said. “Most of the time, the Ashtanga rooms are heated, so a person must be able to tolerate the heat. It is a set series of postures. There is a primary series, an intermediate and a more advanced series. You have to master the poses in a series first before they will move you up into the higher level of classes.”

SIMILARLY, BIKRAM, which is also known as hot yoga, has a set series of poses. “There is a set of 26 postures in Bikram yoga,” says Curtis. “The classes are always the same. They do not deviate. The rooms are generally heated to about 105 degrees. There are certain body types that have a harder time dealing with the heat. I would not recommend anyone who is pregnant to take a very hot class. This appeals mostly to younger people and those who want a workout.”

Iyengar, which was founded by yogi master B. K. S. Iyengar, is good for those with injuries. “Iyengar is probably one of the most popular,” said Fulbright. “It focuses a lot on alignment. It also focuses on healing and uses practices for therapeutic purposes. It is strict and the emphasis is on the postures.”

Hatha, say experts, is actually a term that is used broadly. It is for everyone. “All yoga is Hatha yoga,” said Curtis. “This is taught more commonly so it is was most people know yoga as. It is very therapeutic and good for people with injuries. What Hatha does is improve strength and flexibility. It is basic postures such as triangle pose, the warrior series, forward bends and back bends. What is nice about Hatha yoga is that students are encouraged to go at their own pace, avoid injury and have fun.” Curtis says there are multiple levels of classes that increase in difficulty.

For those looking for a challenging practice, Curtis recommends Vinyasa. “Vinyasa, which is also know as flow yoga, is very popular in the yoga world,” she said. “It is a continual movement from posture to posture. It is a flowing sequence, and is very orchestrated, almost choreographed. It is Asthanga and Hatha yoga blended together. It is fast-paced and there is an emphasis on breathing with each posture that you’re flowing through.”

BEFORE TAKING A YOGA CLASS, Martin has a caveat, however. “First and foremost, consider [your] current health,” he said. “[People] may want to consult a physician to make sure they don't have any medical conditions that could cause serious health complications from yoga, especially the more strenuous forms of yoga.”

Burch says that since there is no regulation of yoga teachers and studios, anyone can adopt the moniker of yoga teacher. As a result, Yoga Alliance has developed minimum standards for teacher training. “Before taking a class, look at a teacher’s training background to see if they have registered with us and met our standards,” said Burch.